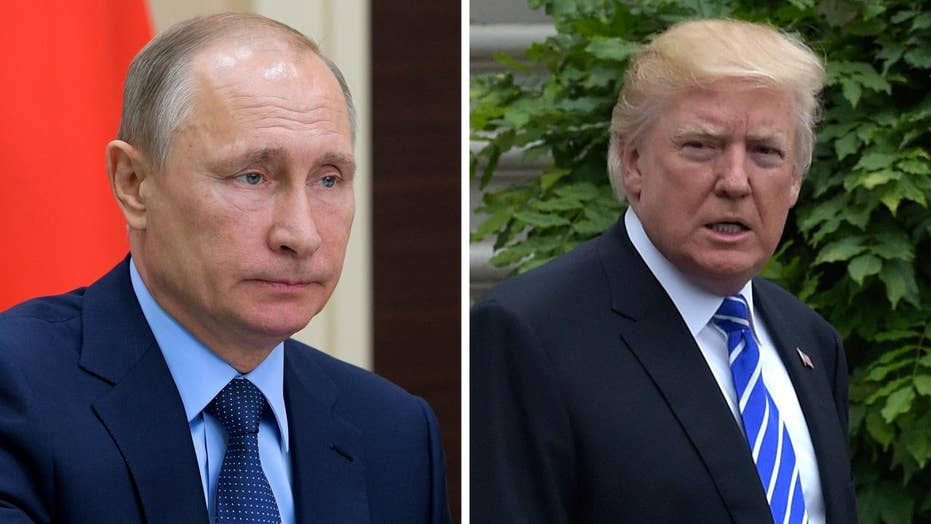 What to expect from Trump-Putin meeting at G-20 summit

U.S. sanctions among topic of president's meeting with the Russian leader on Friday; reaction from Kimberly Atkins, chief Washington correspondent and columnist with the Boston Herald

WARSAW, Poland – In a story July 5 about President Donald Trump's upcoming visit to Poland, The Associated Press reported erroneously that Polish President Andrzej Duda spoke to TVN24. He made the comments to the national news agency, PAP.

By DARLENE SUPERVILLE and KEN THOMAS

WARSAW, Poland (AP) — President Donald Trump opens his two-nation European visit expecting a warm welcome in Poland before he encounters what could be a frostier reception and thornier issues at an international summit in Germany. Trump's sit-down with Russian President Vladimir Putin and North Korea's first launch of an intercontinental ballistic missile threaten to put Trump's skills as a negotiator to the test.

Trump arrived in Warsaw late Wednesday for a 16-hour visit that includes a keynote address to the Poles from Krasinski Square, site of a monument commemorating the 1944 Warsaw Uprising against the Nazis. Scores of people who lined darkened roads waved American and Polish flags and recorded video of Trump's motorcade as it sped him and his wife, Melania, to their hotel.

Trump has scheduled talks with the leaders of Poland and Croatia and may hold a joint news conference — his first one abroad — with Polish President Andrzej Duda. He also was meeting with the heads of a dozen countries bordered by the Baltic, Adriatic and Black seas. Collectively known as the Three Seas Initiative, the group aims to expand and modernize energy and trade with a goal of reducing the region's dependence on Russian energy.

Duda told the Polish news agency PAP on Wednesday that he wants to tackle concrete issues like energy security in the meeting with Trump, not engage in "some general talk about world security." Trump recently devoted a week to U.S. energy production.

At the same time, Trump will have to contend with escalating tensions with North Korea after it successfully launched its first intercontinental ballistic missile this week. Asked, as he left the White House, what he would do about North Korea, Trump said only, "We're going to do very well."

Trump, who's been seeking China's help in containing Pyongyang's missile and nuclear weapons programs, also tweeted his frustration with China for continuing to trade with North Korea.

"So much for China working with us - but we had to give it a try!" Trump wrote.

Chinese President Xi Jinping is among at least nine leaders Trump is scheduled to meet with later in the week in Germany during the Group of 20 summit of the world's leading rich and developing countries.

Trump will also walk a fine line when he meets Friday with Putin. The highly anticipated sit-down comes when relations between the two nations are at a low point, and with the president showing reluctance to adopt a harder line toward Russia amid conclusions by multiple U.S. intelligence agencies that Moscow meddled in the 2016 presidential election to benefit Trump, and continuing federal and congressional investigations into possible collusion between Trump campaign associates and Russian government officials.

Trump's return to Europe follows a shaky inaugural visit in late May and signs of unhappiness around the globe with his presidency.

A recent Pew Research Center survey of attitudes toward Trump in more than three dozen countries found fewer than 3 in 10 respondents expressing confidence in his ability to do the right thing on international affairs.

Trump's earlier visit was marred by several awkward encounters, including a tough speech to NATO members urging them to spend more on their armed forces, an uncomfortable handshake with France's new president and a caught-on-camera moment when Trump pushed past the prime minister of Montenegro to get to the front of a group photo opportunity.

Poland may offer him a chance to shine.

Polish media reports say the government promised the White House cheering crowds as part of its invitation. Ruling party lawmakers and pro-government activists plan to bus in groups of people for Trump's speech. The White House didn't respond to a request for comment on the reports.

With Trump's sights already set on getting re-elected in 2020, the visit to Poland could also be seen as a power play for battleground states like Michigan, Wisconsin and Pennsylvania, home to hundreds of thousands of Polish-American voters.

Trump may also seek to use Poland as an exemplar of partnership. A U.S. ally in Iraq and Afghanistan, Poland is among the five NATO members that spend at least 2 percent of their gross domestic product on the military. That's something that Trump — and U.S. leaders before him — have demanded of NATO allies.

Poland also hosts a few thousand U.S. troops, in addition to supporting U.S. and NATO forces in Iraq and Afghanistan. It's also a regular purchaser of U.S. military equipment.

The Polish government has emphasized that Russia's aggression in Ukraine poses a threat to the whole of Europe, something that will inevitably be raised in discussions with Trump as Europeans aim to gauge his willingness to confront Putin when they meet face to face on Friday.