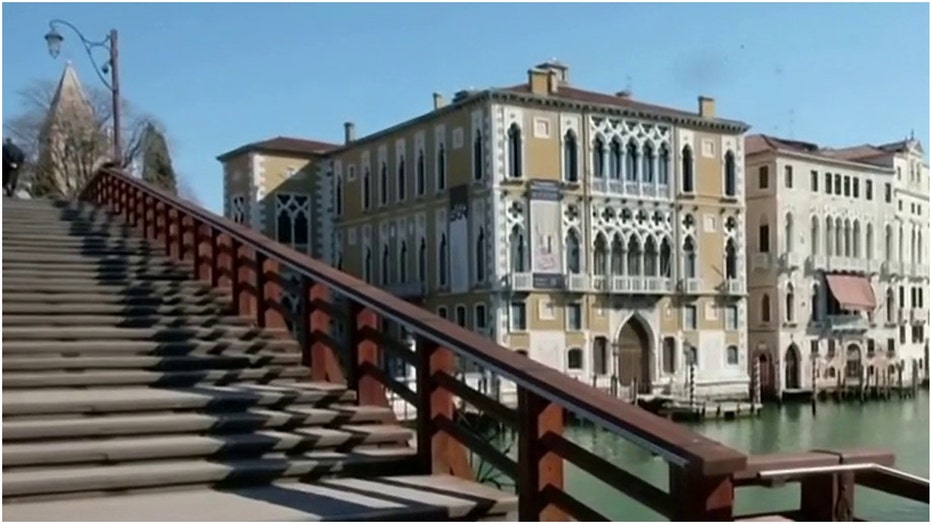 Tens of thousands of military personnel have been placed on standby in the U.K. as officials said schools will close in the coming days and stores have taken measures to control panic-buying as the coronavirus outbreak grows.

In London, home to almost 9 million people, the government urged residents to stay off public transport as authorities considered imposing tougher travel restrictions due to the spread of COVID-19.

London is the epicenter of Britain's coronavirus outbreak, with about one-third of its 2,644 cases.

British leaders said Wednesday night that up to 20,000 military personnel were being placed at "higher readiness" to help public services as part of a "COVID Support Force."

Defense Secretary Ben Wallace said the men and women of the armed forces "stand ready to protect Britain and her citizens from all threats, including COVID-19."

A police car in front of a tent being built to be used as a temporary morgue in London, Thursday, March 19, 2020. (AP Photo/Frank Augstein)

"The unique flexibility and dedication of the services means that we are able to provide assistance across the whole of society in this time of need," Wallce said. "From me downwards, the entirety of the Ministry of Defence and the armed forces are dedicated to getting the nation through this global pandemic."

Those called to service will handle tasks such as driving oxygen tankers, support the police and boost hospital capacity, according to Sky News.

Officials are also working to isolate or quarantine personnel on the U.K.'s top security missions so they don't fall in, which includes those who may need to respond to any acts of terror, Sky News reported.

Retailers in the U.K., took action on Thursday to control some of the panic-buying that's been left stores with shelves emptied, with people unable to get the products they need.

Early shoppers queue and wait in line for the opening of a supermarket in Rugby, England, Thursday, March 19, 2020. (AP Photo/Martin Cleaver)

Tesco, Britain's largest supermarket chain, is limiting customers to three items each across its entire product range. The British supermarket chain Sainsbury's was one of many around the world reserve the first hour of shopping for vulnerable customers.

Jim Gibson, a 72-year-old from southeast London, told The Associated Press he found most of his groceries in a “relatively trauma-free” experience but expressed concern he hadn't been able to get the medicine he needed for his wife and himself. He also expressed concerns that Britain's Conservative government had been too slow in ramping up testing for the virus.

“You can't go on ignoring World Health Organization guidelines — if they're wrong, who the hell is right? ... and their thing is test, test, test,” he said. “Let's have no shilly-shallying.”

In a high-profile case, Michel Barnier, the European Union's chief negotiator for its future relationship with Britain after Brexit, said he had been infected with the coronavirus.

"I am following all the necessary instructions, as is my team," the 69-year-old Barnier said in a tweet. “For all those affected already, and for all those currently in isolation, we will get through this together.”

It was not clear what Barnier's illness would mean for the entire Brexit negotiations.