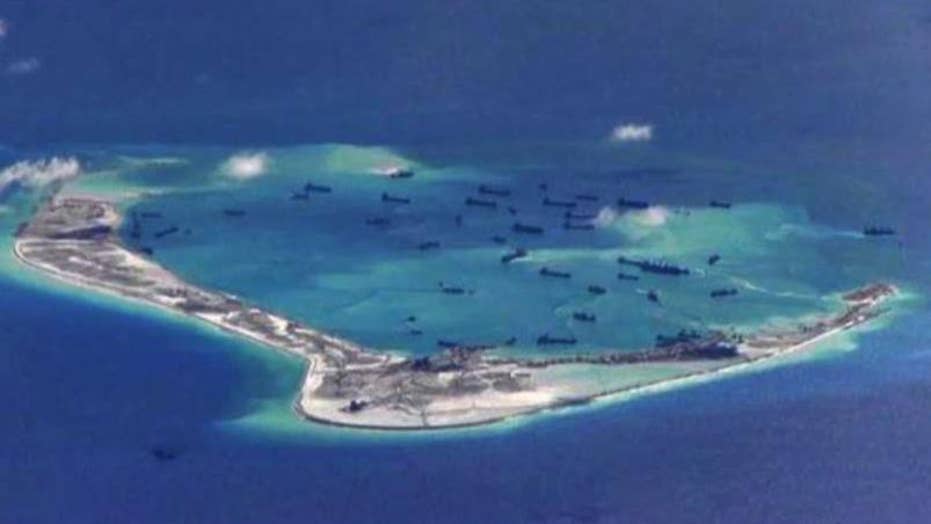 A tribunal at The Hague ruled in a sweeping decision Tuesday that China has no legal basis for claiming much of the South China Sea and had aggravated the seething regional dispute with its large-scale land reclamation and construction of artificial islands that destroyed coral reefs and the natural condition of the disputed areas.

China "does not accept or acknowledge" the tribunal or the ruling, China's state Xinhua news agency said. The nation has long maintained that the tribunal did not have jurisdiction over the dispute.

The ruling is binding on both countries under a United Nations treaty that both have signed, but there is no policing agency or mechanism to enforce it. The ruling still constitutes a rebuke, carrying with it the force of the international community's opinion. It also gives heart to small countries in Asia that have helplessly chafed at China's expansionism, backed by its military and economic power.

Ruling on a variety of disputes the Philippines asked the tribunal to settle between it and China, the five-member panel unanimously concluded that China had violated its obligations to refrain from aggravating the dispute while the settlement process was ongoing.

The Philippines, which sought the arbitration ruling, welcomed the decision. "The Philippines strongly affirms its respect for this milestone decision as an important contribution to ongoing efforts in addressing disputes in the South China Sea," Foreign Secretary Perfecto Yasay said in Manila.

State Department spokesman John Kirby said the U.S. expected China and the Philippines both to comply with their obligations under the ruling, calling it an important contribution to the shared goal of peacefully resolving South China Sea disputes.

Yasay pledged to pursue a peaceful resolution of his country's territorial disputes with China.

The tribunal said that any historic rights to resources that China may have had were wiped out if they are incompatible with exclusive economic zones established under a U.N. treaty.

It also criticized China for building a large artificial island on Mischief Reef, saying it caused "permanent irreparable harm" to the coral reef ecosystem and permanently destroyed evidence of the natural conditions of the feature.

China drafted its so-called nine-dash line to demarcate its claims to virtually the entire South China Sea. Manila brought the case because China's claims infringe upon its own 200-mile exclusive economic zone.

The dispute centers on waters through which an estimated $5 trillion in global trade passes through each year and are home to rich fishing stocks and a potential wealth of oil, gas and other resources. The ruling comes as the U.S. has ramped up its military presence in the region.

However a new Philippine leader who appears friendlier to Beijing could also influence the aftermath of the ruling.

China, which boycotted the case, summoned its demobilized sailors and officers for training drills in exercises that apparently started just days ago.

The People's Liberation Army Daily newspaper said on social media late Monday that Chinese navy reserves have been called up to perform "functional tasks." The post followed online rumors that reservists in central Chinese provinces were called up for an unspecified mission from July 10-22.

In the Philippines, more than 100 left-wing activists marched to the Chinese Consulate in metropolitan Manila, yelling, "Philippine territory is ours, China get out." They called their campaign to push China out of the South China Sea, "CHexit" or "China exit now."

Vietnam, meanwhile, accused Chinese vessels of sinking a Vietnamese fishing boat in disputed waters. Nguyen Thanh Hung, a local fisheries executive in the central province of Quang Ngai, said two Chinese vessels chased and sank the Vietnamese boat around midday Saturday as it was fishing near the Paracel islands. The five fishermen were rescued by another trawler around seven hours later.

China has argued that the tribunal has no jurisdiction and says it won't accept the ruling. It has insisted that bilateral talks between Beijing and other claimants is the only way to address the dispute.

Findings of the tribunal are binding on the parties, including China. But the court — without police or military forces or a system of sanctions at its disposal — can't enforce its ruling, so its potential impact remains unclear.