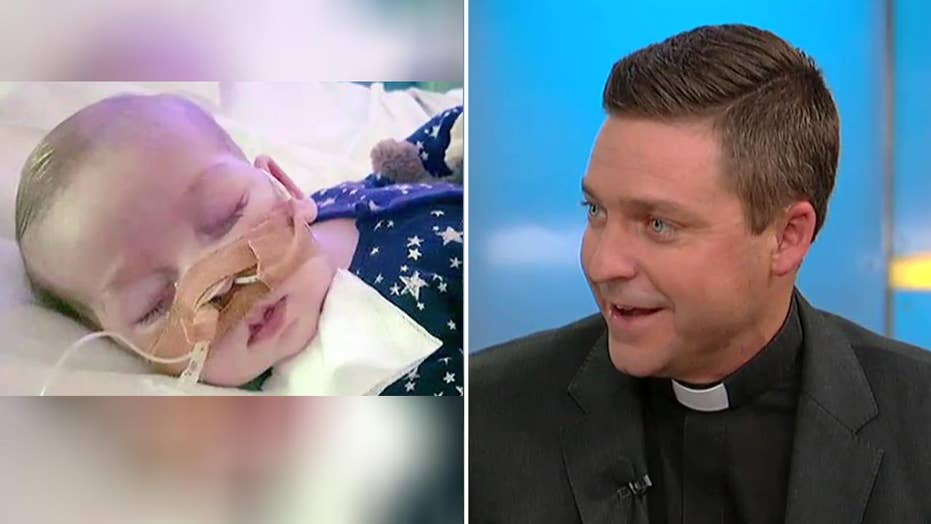 Father Jonathan Morris on the fight for Charlie Gard's life

LONDON – An American doctor will head to the UK next week to examine Charlie Gard, the 11-month old boy suffering from a rare genetic disorder.

High Court Judge Nicholas Francis said Friday that he was "open-minded about the evidence" to come after the visit of Dr. Michio Hirano of Columbia University Medical Center.

Hirano's research focuses on mitochondrial diseases and genetic myopathies and he has treated others with conditions similar to Charlies.

The New York doctor, who is also a professor of neurology at Columbia, testified on Thursday that Charlie has a 10 percent chance of improving with experimental treatment available in the U.S. The judge ruled he could meet with Charlie's doctors to discuss his case.

Charlie's parents, Chris Gard and Connie Yates, have been in a bitter legal battle with the hospital to keep him alive. On Thursday, they walked out of a courtroom after arguing with the judge, but returned later in the day.

The family believes the experimental treatment has a chance of improving the boy's quality of life and reducing the brain damage the illness has already inflicted on the boy.

Charlie Gard's parents are fighting to keep their baby alive.

Hirano, working with his doctors in the UK and consulting with US doctors, will determine whether Charlie would benefit from treatment.

"We'll have to wait and see the evidence," Judge Francis said. He promised to rule by July 25.

CHARLIE GARD: PARENTS OF ILL BABY SAY 'HE DESERVES A CHANCE' AT TREATMENT IN US

The London hospital, revered as one of the world’s best children’s hospitals, has argued Charlie, who can neither see, nor hear, move, swallow or even breathe without the help of life support, should be removed from his ventilator and allowed to die with his dignity.

The hospital has said that "a world where only parents speak and decide for children and where children have no separate identity or rights and no court to hear and protect them is far from the world in which [Great Ormond Street Hospital ] treats its child patients."

Charlie Gard has been cared for at Great Ormond Street Hospital, in London. (AP)

New York Presbyterian Hospital and Columbia University Irving Medical Center have both announced they would be willing to take in Charlie – though they said a few conditions need to be met. Charlie needs to be transferred safely, “legal hurdles” cleared and it needs to “receive emergency approval from the FDA for an experimental treatment as appropriate.”

President Donald Trump and Pope Francis have shined an international spotlight on the case.

Pope Francis issued a statement insisting on the need to respect the wishes of the parents to "accompany and treat" their son to the very end.

Americans United for Life and other groups have also take the parent’s side, arguing the infant needs a "chance at life." Petitions have circulated to offer support and others have arrived at Charlie's bedside to pray.

The case has been compared to the 2005 case of Terri Schiavo, who suffered severe brain and was in a vegetative state after she went into cardiac arrest in her Florida home. Her parents, who wanted her kept alive, and her husband, who wanted to remove her feeding tube, were in a high-profile legal battle that ended when the courts sided with her husband.