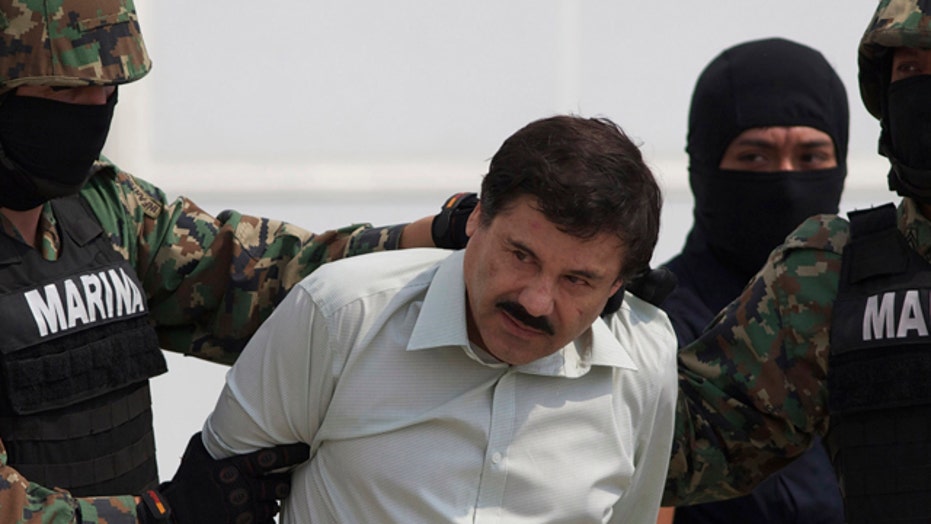 After narrow escapes from the military, law enforcement and rivals over 13 years on the run, Joaquin "El Chapo" Guzman is back in Mexican custody. Now, what is likely to be a lengthy and complicated legal process to decide which country gets to try him first will begin.

In Mexico, Guzman is likely to face a host of charges related to his role as the head of the Sinaloa Cartel, the country's most powerful drug organization and a key player in the yearslong violence that has claimed tens of thousands of lives since 2006.

Grand juries in at least seven U.S. federal district courts have handed up indictments for Guzman on a variety of charges, ranging from smuggling cocaine and heroin into the United States to participating in an ongoing criminal enterprise involving murder and racketeering.

Mexico convicted the man whose nickname translates to "Shorty" on drug trafficking and murder charges in 1993. Guzman had served less than half of his 20-year prison sentence when he escaped from jail in 2001. The Mexican government is almost certain to levy a host of new charges related not only to his escape but also to his role in running the global drug-empire that the Sinaloa Cartel has become.

Calls for his extradition to the United States started just hours after word spread of his arrest Saturday morning at a condominium in Mazatlan, a beach resort town on Mexico's Pacific Coast.

Jack Riley, head of the Drug Enforcement Administration's Chicago office, told the Chicago Sun-Times newspaper Saturday that he believes federal prosecutors there have the best case against Guzman in the United States.

"I fully intend for us to have him tried here," said Riley said.

Last year Chicago's crime commission named Guzman "Public Enemy No. 1" and said his gang supplied most of the city's illicit drugs. He was indicted in federal court in 2009 and faces heroin and cocaine trafficking charges. Several men whom prosecutors have described as Guzman's lieutenants already are awaiting trial in Chicago.

There are pending extradition requests for Guzman in the United States, but so far the Justice Department has not said whether or when it plans to ask the Mexican government to send Guzman north.

George Grayson, a government professor at the College of William and Mary who studies Mexico's cartels, said domestic politics in Mexico are likely to play a significant role in how Mexico decides Guzman's legal future.

Calderon routinely touted his administration's fight against the criminal gangs and sent thousands of police and military troops to various hot spots around the country to take on the gangs. But Pena Nieto, who took office in late 2012, has been somewhat mute on the cartel fight, instead championing other domestic concerns, including the economy and education.

Guzman's arrest by Mexican federal forces with the help of the DEA, the U.S. Marshal Service and Immigration and Customs Enforcement, is already seen as one of the biggest achievements for Pena Nieto's young administration. And he may not want to relinquish the win quickly.

"It's my personal opinion that they are going to say they want to hang on to him simply because of that fact that he is the crown jewel of the Pena Nieto administration, in terms of their counterdrug efforts," said Michael Vigil, a former senior DEA agent who has worked in Mexico and has been briefed on Guzman's arrest.

House Homeland Security Chairman Michael McCaul said it would be unusual for such a high profile suspect to be extradited before being tried in Mexico, but this is a case where such an exception might be warranted.

"I think the concern is the fact that he's already broken out of prison once," the Texas Republican said Sunday on ABC's "This Week."

McCaul said he worried that corruption and Guzman's status as one of the most powerful and feared men in Mexico could lead to a short-lived prison stay.

"I know there's a sense of pride in Mexico ... but given the risk of flight and corruption, it all weighs toward an extradition," McCaul said. "This is great victory for both Mexico and the United States, in terms of our level of cooperation. It signifies a new era in our cooperation. But I would argue the extradition would continue that cooperation."

Whatever the final decision, Vigil said it's not likely to be made quickly.

"It goes through a lot of legal reviews and then obviously Chapo Guzman is going to have some of the best attorneys in Mexico and will try to impede the effort," Vigil said. "It's not going to be overnight."