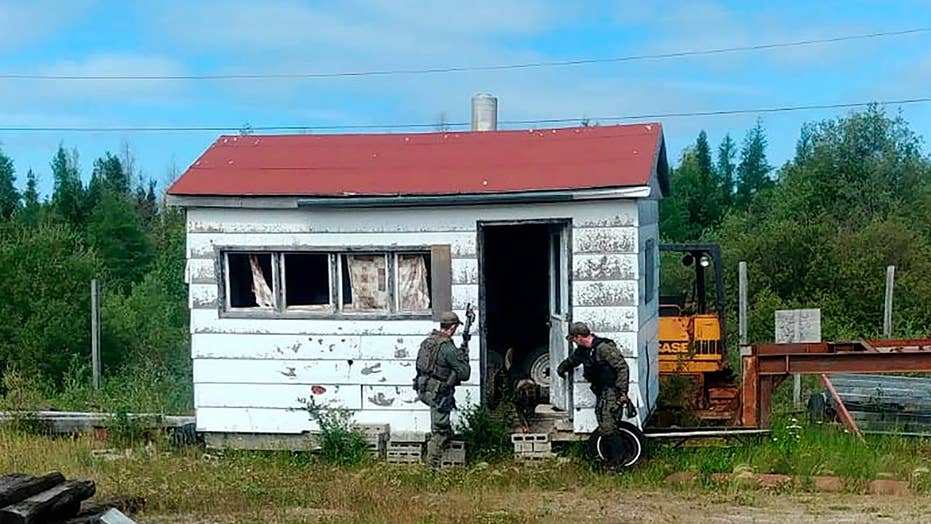 Investigators return their focus to Gilliam, Manitoba where two teenagers wanted in the murders of three people were last seen. Royal Canadian Mounted Police Cpl. Chris Manseau weighs in on the latest in the search.

As authorities continue to scour remote northern Manitoba for two young men suspected in the killings of three people in Canada – including the murders of an American woman and her Australian boyfriend -- an official revealed Monday that the pair had been stopped before police announced a nationwide manhunt for the two.

The Royal Canadian Mounted Police (RCMP) swarmed York Landing on Sunday after saying they received a "credible" tip that two people matching the description of Kam McLeod, 19, and Bryer Schmegelsky, 18, were in the area, which is about 56 miles from Gillam, where a vehicle that had been used by the suspects was found burned last week.

But by Monday afternoon, the RCMP said on Twitter they still have not been able to verify if the two young men were in the area.

"After a thorough & exhaustive search, #rcmpmb has not been able to substantiate the tip in York Landing. RCMP resources will continue to be in the York Landing & Gillam areas," the agency said. "We thank the community for their patience & understanding & ask them to continue to be vigilant."

In an interview Tuesday morning on "America's Newsroom" RCMP Corporal Chris Manseau said that authorities "had to go where the evidence leads us," and they have not pulled officers away from searches in the Gillam area after the possible sighting.

"We never want to put all our eggs in one basket," he said.

Manseau said authorities are reaching out to the public yet again in hopes of finding the two suspects in the remote area. He also disclosed that searching an area over 2,500 miles from the crime scenes presents a challenge for investigators.

"I think in a case like this you can't get too many," he told Fox News.

Before the two young men were the focus of manhunt that has spanned Canada, the pair were stopped during a routine check as they drove through the reserve of the Tataskweyak Cree Nation in Manitoba, Canada's Global News reported.

Councilor Nathan Neckoway from the Tataskweyak Cree Nation told the news outlet the pair were stopped during a routine check for alcohol in the dry community near Split Lake -- located about 150 miles from Gillam -- but were let go when authorities didn't find anything.

“We weren’t aware of their status, of them being wanted,” Neckoway told Global News. “Apparently after they came to our community, that’s when they sent out that wanted [status].”

The RCMP later tweeted that a Split Lake First Nations Safety Officer had made the stop.

Authorities announced on July 23 the two were considered suspects in the killings.

The safety officer, Albert Saunders, told The Daily Mail he felt "like I should have done something earlier."

"I didn't really know those guys were on the run, that's why I didn't think much about it at first, until after they posted the pictures of them the next day," he told the Daily Mail of the July 22 encounter.

He said the two appeared "scared" when he initially approached and that McLead kept apologizing, adding that the pair didn't disclose where they were going.

The RCMP said Monday that police were still unable to confirm the reported sightings of the young men.

Police earlier had been searching further east in the town of Gillam, aided by tracking dogs and drones. The tip about the possible sighting came from members of the Bear Clan Patrol, an indigenous-led neighborhood watch group that was invited by the Assembly of Manitoba Chiefs to help ease residents' fears.

While York Landing geographically isn't far from Gilliam, Courchaine said the community is "only accessible by air or via a two-hour ferry crossing in the summer." There also is a rail line around 15 miles south.

The area has "very challenging terrain, lots of forest, lots of muskeg, waterways," said Courchaine. In response, the RCMP “immediately deployed multiple resources to the community,” which included police dogs, aircraft and search and rescue teams.

“We are also partnering with the Canadian military who are using some of their specialized equipment,” Manseau said Monday on “Shepard Smith Reporting.”

Chief Leroy Constant with York Factory First Nation posted a picture of one of the aircraft that was used in the search in York Landing on his Facebook page Monday.

McLeod and Schmegelsky are wanted in connection with the deaths of American Chynna Deese, 24, her Australian boyfriend Lucas Fowler, 23, and Leonard Dyck, 64, of Vancouver, British Columbia.

In this undated photo provided by the Deese family of Chynna Deese, 23-year-old Australian Lucas Fowler, left, and 24-year-old American girlfriend Chynna Deese poses for a selfie. The couple were found murdered along the Alaska Highway near Liard Hot Springs, Canada, on Monday, July 15, 2019. (Deese Family via AP)

A source close to the investigation told Fox News on Saturday that McLeod and Schmegelsky may have escaped from the Manitoba town where they were last seen “with someone who is not police friendly.” The source added that the two may have altered their appearances and offered cash to a driver to leave the area of Gillam, a town of approximately 1,200 people in the north of the province.

Police said they spent much of Sunday scouring cottages, cabins, waterways and along the rail line in Gillam for any signs of the suspects, searching on the ground and in the air.

“All of our policing agencies across the country are aware of these suspects and they’ve passed along that type of information to all of our partners on the other side as well. So, there are posters up, there are fliers, they are watching the news as much as we are," Manseau told Fox News on Monday. "Their faces are plastered just about everywhere, so the odds of them getting across the border are going to be very slim.”