Brunei Sultan Hassanal Bolkiah says he’s putting a hold on condemning to death people who violate new Shariah laws that call for capital punishment for those found guilty of gay sex and adultery.

The sultan made his announcement Sunday in a speech for Ramadan. It is widely seen as a move prompted by intense international criticism over the new laws, which say those found guilty of gay sex can be stoned to death or whipped. Adulterers risk death by stoning too, while thieves face amputation of a right hand on their first offense and a left foot on their second. The new laws apply to children and foreigners, even if they are not Muslim.

After Brunei implemented the news laws early last month, celebrities, including Elton John and George Clooney, intensified the spotlight on them by boycotting hotels in the U.S. owned by the Dorchester Collection group, which a Brunei-owned investment agency runs.

Several international banks, including J.P. Morgan and Goldman Sachs, said they were banning employees from staying at the hotels as a protest against Brunei’s new laws.

The United Nations has called the laws implemented April 3 “draconian” while the U.S. and several other countries have urged Brunei to halt the plans.

In a statement shortly after the implementation, UN High Commissioner for Human Rights Michelle Bachelet said the new laws "stipulate the death penalty for offenses such as rape, adultery, sodomy, extramarital sexual relations for Muslims, robbery, and insult or defamation of the Prophet Mohammad, among others."

Bachelet added: "It introduces public flogging as a punishment for abortion, and amputation for theft. It also criminalizes exposing Muslim children to the beliefs and practices of any religion other than Islam." 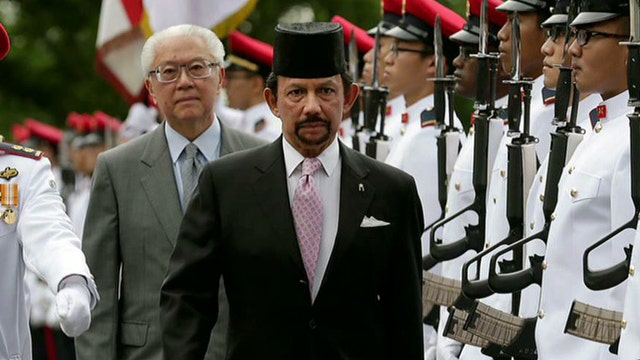 Even before 2014, homosexuality was already punishable in Brunei by a jail term of up to 10 years. Sultan Hassanal Bolkiah said Sunday he was aware of the “many questions and misperceptions” over the penalties provided for under new sections of Brunei’s Shariah Penal Code, but stressed that there should be no fear.

Brunei has had a “de facto moratorium” on capital punishment for more than two decades and “this will also be applied to cases under the [Shariah laws] which provides a wider scope for remission,” he said.

“We are conscious of the fact that misperceptions may cause apprehension. However, we believe that once these have been cleared, the merit of the law will be evident,” the sultan said. Sultan Hassanal said Brunei will also ratify the U.N. Convention Against Torture to show its commitment to human rights.

“Both the common law and the Shariah law aim to ensure peace and harmony of the country. They are also crucial in protecting the morality and decency of the public as well as respecting the privacy of individuals,” he added.

In an immediate reaction, Commonwealth Secretary-General Patricia Scotland on Monday hailed the moratorium on the death penalty but also urged Brunei to revoke other harsh punishments such as the amputations and floggings. Brunei is a member of the Commonwealth.

Sultan Hassanal instituted the Shariah Penal Code in 2014 to bolster the influence of Islam in the oil-rich monarchy of around 430,000 people, two-thirds of whom are Muslim. There has been no vocal opposition to the new penalties in Brunei, where the sultan rules as head of state with full executive authority. Public criticism of his policies is extremely rare in the country.