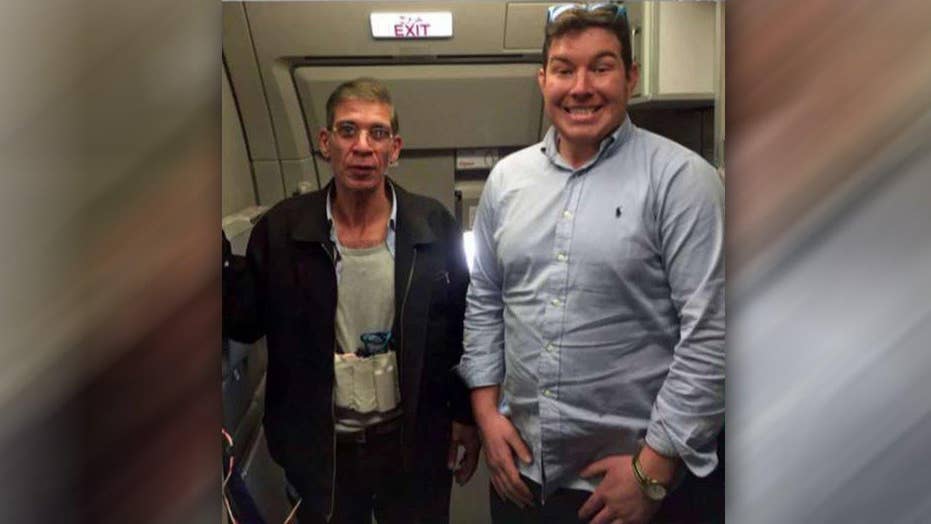 A British man who snapped a picture of him smiling alongside the passenger who hijacked an EgyptAir flight Tuesday said he was "not sure why" he asked for a photograph.

Ben Innes, a 26-year-old from the northern English city of Leeds, told The Sun that he was "trying to stay cheerful in the face of adversity" when he approached 59-year-old Seif Eddin Mustafa and took the photo, which later went viral.

Mustafa had claimed to have explosives in his belt and demanded that the aircraft – which was on a scheduled route from the Egyptian coastal city of Alexandria to Cairo -- be diverted to airports in either Greece, Turkey or Cyprus.

The aircraft eventually landed in Cyprus after the pilots warned of low fuel, and despite an initial refusal from Cypriot authorities on the landing request. The landing in Larnaca began a bizarre six-hour standoff with authorities, during which Mustafa made a series of demands described as "incoherent" by Cyprus's president, before being arrested. All 72 passengers and crew aboard the plane were released.

A Cyprus court on Wednesday ordered Mustafa’s detention for eight days because of fears that he might flee and the fact that he admitted to the hijacking in a voluntary statement to police.

Egyptian General Prosecutor Nabil Sadek's office said Wednesday that he has asked Cyprus to "take necessary measures to extradite Mustafa in order to start an investigation," according to a statement.

Innes was one of seven people, including three passengers, kept on board the plane by Mustafa for hours after he had released most of the passengers. Innes told The Sun he suspected that the hijacker's "suicide belt" might be a fake.

"I figured if his bomb was real, I’d nothing to lose anyway, so took a chance to get a closer look at it," he told the paper. "I got one of the cabin crew to translate for me and asked him if I could do a selfie with him. He just shrugged OK, so I stood by him and smiled for the camera while a stewardess did the snap."

“I could not believe it when he got up for that picture," she told The Sun. "He was smiling while standing next to the hijacker. As he walked back I said to him, 'Are you f---ing mad?'"

But the belt of explosives turned out to be "telephone cases" made to look like they were explosives.

Mustafa had threatened to detonate the belt if police attempted to "neutralize" him, Lambrianou said, but he eventually gave up.

Innes and the remaining hostages were later released before Mustafa was arrested by anti-terror police.

Friends of Innes weren't surprised by the stunt, with one telling the Daily Telegraph, "Ben is a wild man and this is totally in character for him. He... didn't have much respect for authority."

The haphazard hijacking spawned derision from Cypriot and Egyptian officials as it became clear Mustafa was not connected to any terrorist organization.

Lambrianou said Cypriot authorities will ask the help of Interpol to determine how the suspect managed to pass the fake explosives belt through airport security in Egypt.

Cypriot officials had described Mustafa as "psychologically unstable" following a strange set of demands he made to police negotiators, including what Lambrianou said was a letter he wanted delivered to his Cypriot ex-wife in which he demanded the release of 63 dissident women imprisoned in Egypt.

Lambrianou said that Mustafa told police after his arrest: "What's someone supposed to do when he hasn't seen his wife and children in 24 years and the Egyptian government won't let him?"

Cyprus President Nicos Anastasiades, when asked by reporters whether he could confirm that the incident was about a woman, replied, "Always, there is a woman", drawing laughter.

An Egyptian Foreign Ministry official was more blunt, saying Mustafa was "not a terrorist, he’s an idiot. Terrorists are crazy but they aren’t stupid. This guy is."

A handcuffed Mustafa flashed the "V'' for victory sign with his hand out of a police vehicle as he was driven away from the Larnaca court house Wednesday after the hearing.