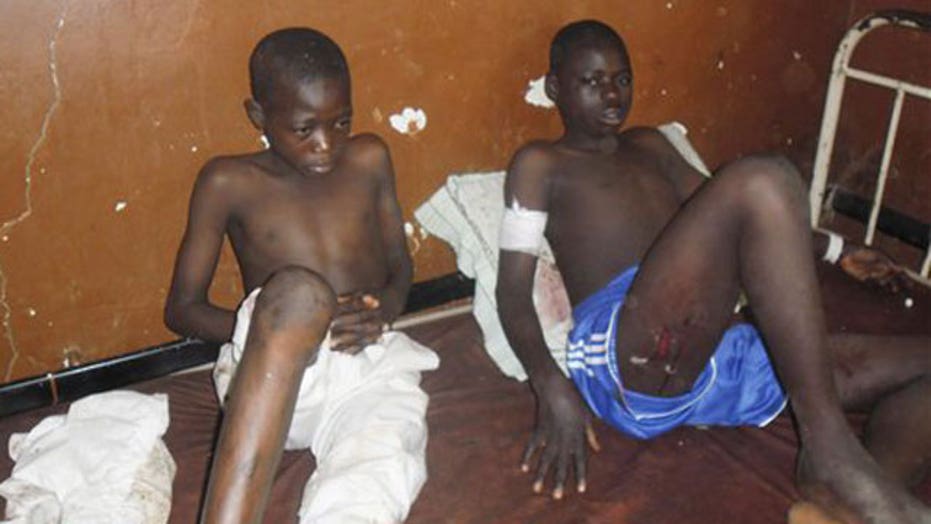 A suicide bomber-- dressed in a school uniform and apparently carrying explosives in a student rusksack-- killed at least 48 people at a boys high school in northeastern Nigeria Monday.

The militant group Boko Haram is believed to have carried out the attack, police told the BBC.  The terror group—whose name roughly translates to "Western education is forbidden"-- has regularly targeted schools during a deadly five-year insurgency aimed at establishing an Islamic state. The extremists have initiated violent attacks to prevent children from going to school, believing girls should not attend school and boys should only receive an Islamic education.

Survivors of Monday’s bombing said the explosives detonated during the weekly assembly at the Government Technical Science College in Potiskum, capital of the Yobe state. An estimated 2,000 students had gathered in the school's hall at the time of the blast.

"We were waiting for the principal to address us, around 7:30 a.m., when we heard a deafening sound and I was blown off my feet, people started screaming and running, I saw blood all over my body," 17-year-old student Musa Ibrahim Yahaya said from the general hospital, where he was being treated for head wounds.

Hospital workers say at least 79 victims are being treated and amputations are likely. A morgue worker told the Associated Press at least 48 people—ranging in age from 11 to 20 years old-- had died. The hospital was so overcrowded that some patients were squashed two to a bed. A resident told the BBC there were parents wailing at the sight of their children's bodies at the hospital.

Soldiers rushed to the grisly scene, but were chased away by people throwing stones, angry at the military's inability to halt a 5-year-old Islamic insurgency that has killed thousands and driven hundreds of thousands from their homes. The region has been in the grip of fighting between government forces and Boko Haram.

Garba Alhaji, father of one of the wounded students, said the school did not have proper security. "I strongly blame the Yobe state government for not fencing the college," he said, adding that just three months ago a bomb was discovered in the school and removed by an anti-bomb squad.

The federal government of President Goodluck Jonathan, who is running for re-election in February, also had promised more security for schools in the northeast.

"My brother, a student in the school, died in the blast. He was about 16 years old... We buried him today," an unidentified grieving relative told the BBC. "The government needs to be more serious about the fight against Boko Haram because it is getting out of control," he added.

The group made international headlines earlier this year when it kidnapped 276 girls from a school in the same region in April. Several of the girls later escaped, but the Nigerian government says 219 are still behind held by the group. Boko Haram leader Abubakar Shekau says the children have converted to Islam, are learning to memorize the Koran, and have been married off.

There have been many other horrific attacks on schools which have received less attention - including last February's raid on Buni Yadi, in Yobe State.

Dozens of boys were burnt to death, shot or killed with knives in the dormitory. Female students were spared but told to never attend school again, go off and get married. Boko Haram wants the education of boys to be limited to strict Koranic studies only.

A suicide bomb attack in Potiskum killed 30 people a week ago, when suspected Boko Haram fighters attacked a religious procession of moderate Muslims. Yobe state is one of three in Nigeria that have been placed under a state of emergency as a result of the group's activities.

Many Nigerians are angry that Boko Haram has increased attacks and bombings since Oct. 17, when the government claimed to have brokered a cease-fire. Boko Haram leader Shekau has denied negotiating a truce.