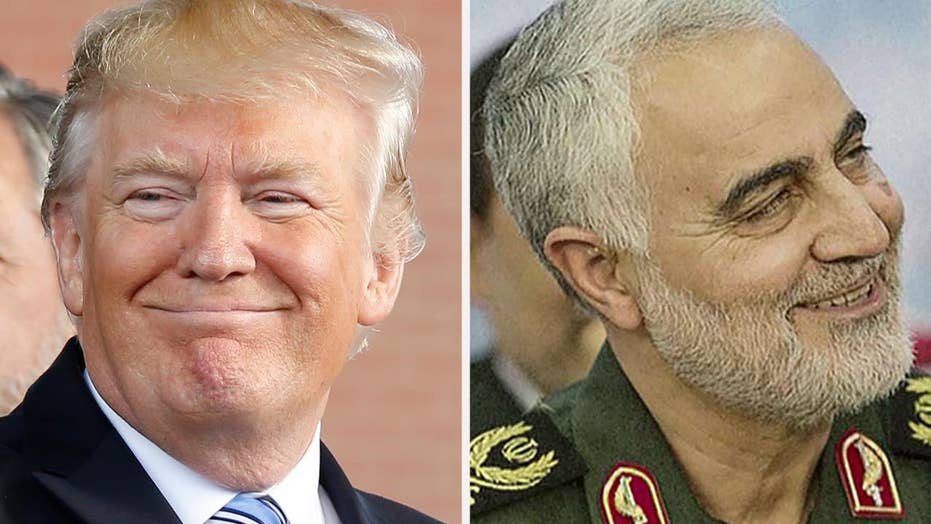 After ordering an airstrike that killed Iranian Gen. Qassem Soleimani in Iraq, President Trump says the general should have been taken out many years ago; Kevin Corke reports from West Palm Beach, Florida.

Israeli Prime Minister Benjamin Netanyahu ordered its military on high alert as he expressed strong support for President Trump on Friday, less than a day after the U.S. killed top Iranian military general Qassem Soleimani in an airstrike at Baghdad International Airport.

Netanyahu called the U.S.’s recent attacks on Iran a “just struggle,” adding that President Trump should be praised for his actions, which likely thwarted future attacks on American citizens.

“Just as Israel has the right of self-defense, the United States has exactly the same right,” he told reporters after returning from a recent trip to Greece.

“Qassem Soleimani is responsible for the death of American citizens and many other innocent people. He was planning more such attacks," he said.

"President Trump deserves all the credit for acting swiftly, forcefully and decisively. Isreal stands with the United States in its just struggle for peace, security and self-defense.”

In addition to backing the U.S., Israel placed its military on heightened alert while top leaders and intelligence chiefs gathered for a “situational assessment,” according to Reuters.

Cabinet leaders have been instructed not to comment but a spokesperson for the Israeli military told Reuters that the Mount Hermon ski resort, which sits close to the Syrian border, had been shut down “following an assessment of the situation.”

While the longtime U.S. ally reacted positively to Soleimani’s killing, the global reaction has been less than optimistic.

ESMAIL QAANI, THE NEW LEADER OF IRAN’S QUDS FORCE, IS A FAMILIAR FOE TO THE US WHO HAS REPEATEDLY SLAMMED TRUMP

Some country leaders are saying that stability in the Middle East has become more questionable in the wake of the killing, with France's deputy minister for foreign affairs, Amelie de Montchalin, calling it a “more dangerous world.”

“Military escalation is always dangerous,” she told RTL radio. "When such actions, such operations, take place, we see that escalation is underway.”

“We are waking up in a more dangerous world.”

Secretary of State Mike Pompeo dismissed her comments though, telling CNN: "Well, the French are just wrong about that. The world's a much safer place today, and I can assure you Americans in the region are much safer today, after the demise of Qassem Soleimani."

Russia echoed this sentiment, warning in a statement from the Foreign Ministry Office that “such actions don’t help resolve complicated problems in the Middle East, but instead lead to a new round of escalating tensions.”

Beijing also chimed in, expressing that it was “highly concerned” over Soleimani’s death.

"Peace in the Middle East and the Gulf region should be preserved,” Chinese Foreign Ministry spokesman Geng Shuang said. "We urge all parties concerned, especially the United States, to maintain calm and restraint and avoid further escalation of tensions.”

Germany and Britain spoke just shy of voicing support for the U.S., instead expressing an understanding of what triggered the killing.

The Pentagon confirmed Thursday evening that Trump had ordered the attack that killed Soleimani and other military officials. Iran’s top “shadow commander” was responsible for the deaths of hundreds of American and coalition service members and the wounding of thousands more, the State Department said.

Is it worth the risk taking out Soleimani?

Brad Wenstrup, House Intelligence Committee, discusses the influence General Soleimani had with past presidents and how the U.S. will respond to Iran's future plans of attack

“General Soleimani was actively developing plans to attack American diplomats and service members in Iraq and throughout the region," the department said in a statement. "The United States will continue to take all necessary action to protect our people and our interests wherever they are around the world.”