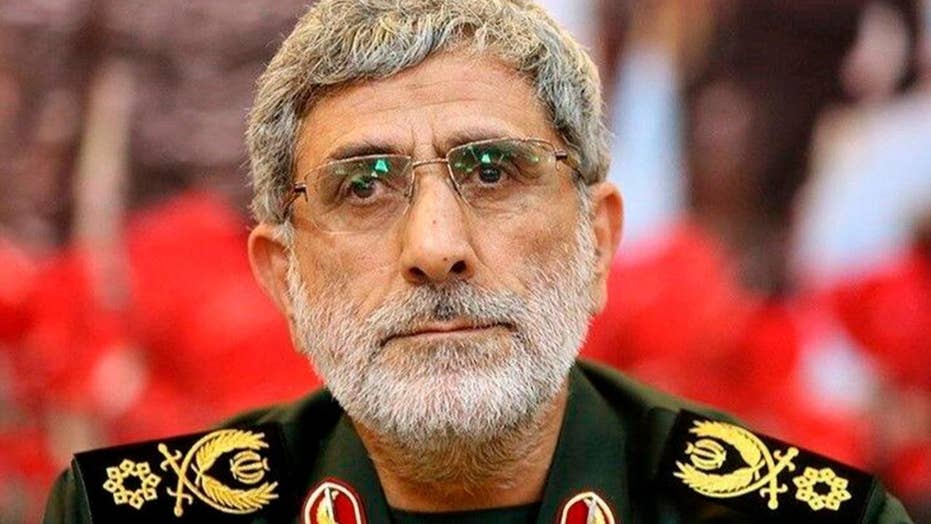 The new leader of Iran's Quds Force: Who is Esmail Qaani?

Brigadier Gen. Esmail Qaani, the new leader of Iran's elite Quds Force, is a familiar foe to the U.S. who has repeatedly slammed President Trump. He now spearheads the special military unit following the death of Gen. Qassem Soleimani, who was killed Thursday in a U.S. airstrike at Baghdad International Airport in Iraq.

The new leader of Iran’s Islamic Revolutionary Guard Corps' elite Quds Force once boasted that U.S. troops have “suffered more losses from us than we have suffered losses from them” and has repeatedly ripped President Trump and America’s allies.

Brigadier Gen. Esmail Qaani, 62, now spearheads the special military unit following the death of Gen. Qassem Soleimani, who was killed Thursday in a U.S. airstrike at Baghdad International Airport in Iraq. He had served as Soleimani’s deputy commander since 1997 – and the Treasury Department says he has used his power to direct funding toward terrorist groups like Hezbollah.

Qaani, like many other Iranian government and military officials, also has a history of making hostile and inflammatory statements against the U.S.

“America has suffered more losses from us than we have suffered losses from them,” the Middle East Institute quoted him as saying during a 2017 ceremony in commemoration of Iranian forces and Iranian-backed militias battling in Syria and Iraq.

Brigadier. Gen. Esmail Qaani is now the new commander of the Revolutionary Guard's Quds Force -- and he is no stranger to the U.S. (AP/Office of the Iranian Supreme Leader)

He has taken swipes at Trump, warning in 2017 that “threats against Iran will damage America,” Reuters reported, citing Iranian media.

“We have buried many... like Trump and know how to fight against America,” Qaani added.

In October 2017, Qaani, while speaking in Iran, “slammed recent comments made by U.S. President Donald Trump and other U.S. officials against the Islamic Republic and said, ‘Any nonsense they say will be to their detriment’” according to the Tasnim News Agency.

“Since the victory of the Islamic Revolution (in 1979), we have never intended to wage a war against any country, but the global arrogance (the US) and its stooges have always sought for a battle,” he reportedly added. “We do not welcome wars but if anyone invades our country, he will learn a lesson that would no longer even think of aggression (against Iran).”

LINDSEY GRAHAM: SOLEIMANI IS DEAD BECAUSE HE 'MISCALCULATED' PRESIDENT TRUMP

In 2018, while speaking at a conference about the Israeli-Palestinian conflict, Qaani “hailed the growing power of the anti-Israeli resistance front” and said that the “reason behind the U.S. decision to relocate its embassy [to Jerusalem] is the weakness of the country’s president and leaders of some Muslim countries,” the Tasnim News Agency reported.

When Qaani served as Soleimani’s deputy commander, he used his authority to cover “financial disbursements to IRGC-QF elements, including elements in Africa, as well as to various terrorist groups, including Hezbollah,” the U.S. Treasury Department has said.

In 2012, Qaani was added to the Treasury Department’s Specially Designated Nationals list, which froze his assets under U.S. jurisdiction, according to Iran Watch.

“As the Iranian regime exports its lethal aid and expertise to foment violence in Syria and Africa, Treasury will continue to expose the officials and companies involved and work to hold them accountable for the suffering they cause,” Under Secretary for Terrorism and Financial Intelligence David S. Cohen said at the time.

Qaani “had financial oversight” of a weapons shipment intended for Gambia that was intercepted in Nigeria, the Treasury Department said in 2010.

“This IRGC-QF weapons shipment – hidden among construction materials – contained grenades, rockets, mortars, and ammunition,” it said. “While Iran publicly downplays Iranian government involvement in the lethal aid shipment, the highest levels of the IRGC-QF were involved.”

As of now, Qaani’s role appears to remain unchanged with his promotion to the head of the Quds Forces, which is tasked with carrying on Iran’s influence via proxies.

Iran’s Supreme Leader Ayatollah Ali Khamenei said in a statement Friday that the program “will be unchanged from the time of his predecessor.”