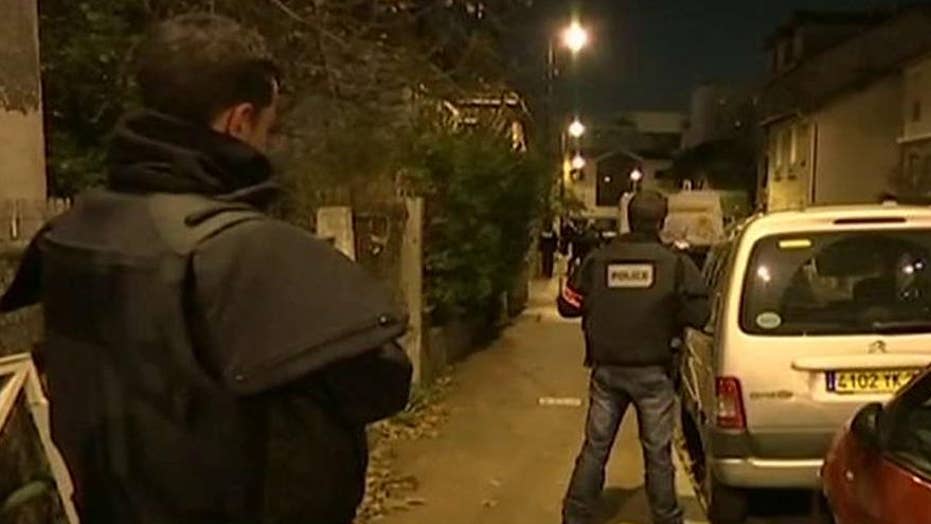 Abandoned suicide vest may be linked to attack suspect

Belgian and French authorities stepped up their manhunt Wednesday for two suspects sought in the deadly Paris terror attacks after officials revealed the identity of a man wanted for allegedly transporting one of the bombers to the city.

The Belgian federal prosecutor's office Tuesday issued an international arrest warrant for Mohamed Abrini, who is being tracked by both Belgian and French police.

Abrini, who has been described as "armed and dangerous," was seen on surveillance video with Salah Abdeslam — another top fugitive suspect in the attacks who crossed into Belgium the day after the killings — at a gasoline station in Ressons on the highway to Paris two days before the attacks.

The video showed Abrini driving Abdeslam down to Paris.

Abdeslam, who has been on the loose for 12 days, is being sought in Belgium, France and Germany, while other authorities are wondering if he was somehow able to get back to Syria and his Islamic State colleagues.

His brother, Mohamed, pleaded again Wednesday for Salah to turn himself in to police.

The attacks in Paris, claimed by the ISIS terror group, have been traced to a network of people with ties to both France and Belgium,

Belgian authorities charged five people Tuesday with acting as accomplices in the attacks, including those who provided logistical and other support for the terrorists.

The terror concerns are at their highest in Belgium’s capital of Brussels, where the risk of a coordinated attack remains, authorities told Fox News. However, most of those detained in a series of raids over the weekend have been released and the city’s schools and subways re-opened Wednesday.

Belgian Interior Minister Jan Jambon said raids carried out Sunday night had been designed to foil an imminent attack in Brussels. Authorities had detained 16 people during the raid, but no explosives or firearms were seized.

In Paris, where French President Francois Hollande is set to meet German Chancellor Angela Merkel on Wednesday, dozens of victims of the attack – which left 130 dead and more than 350 injured -- still remain in hospitals.

Hollande is scheduled to give a keynote speech during a memorial service at the Les Invalides monument Friday, which will be attended by survivors of the attack and the victims’ families.

Cazeneuve said 120,000 police, gendarmes and soldiers are currently deployed across France to ensure the country's security.

French authorities revealed Tuesday that the alleged mastermind behind the attacks took an active part in the carnage and even returned to the scenes of the assaults to examine his handiwork.

Paris prosecutor Francois Molins said that investigators believe Abdelhamid Abaaoud doubled back to the sites of the bloodshed Nov. 13, including the Bataclan concert hall, even while special police forces were still there.

"The geolocalization of Abdelhamid Abaaoud's alleged phone between [10:28 p.m.] and [12:28 a.m.] confirms a presence in the 12th, 11th, and 10th districts, and notably near the Bataclan concert hall," Molins said. "This allows us to think that Abdelhamid Abaaoud returns to the crime scenes following the attacks on terraces of the cafes and restaurants of the 10th and 11th districts while (special police) were still taking action at the Bataclan." Three attackers killed 89 people at the music venue after opening fire during a concert by the American rock group Eagles of Death Metal.

Molins also said that Abaaoud had been in Paris for at least two days prior to the attacks, contrary to the belief by France's security services that he was in Syria.

Authorities also believe that Abaaoud and at least one accomplice planned to carry out another suicide bombing in La Defense, the business district of Paris located on the western edge of the city. Molins said investigators think the attack was planned for Nov. 18 or 19.

However, Abaaoud was killed during a police raid on an apartment in a northern Paris suburb in the early hours of Nov. 18. His female cousin, Hasna Ait Boulahcen, died of asphyxia apparently from the explosive vest detonated by a third person, who hasn't been identified, the prosecutor said. Molins said the third person was likely Abaaoud's co-conspirator in the planned La Defense attack.

Fox News' Greg Palkot and the Associated Press contributed to this report.