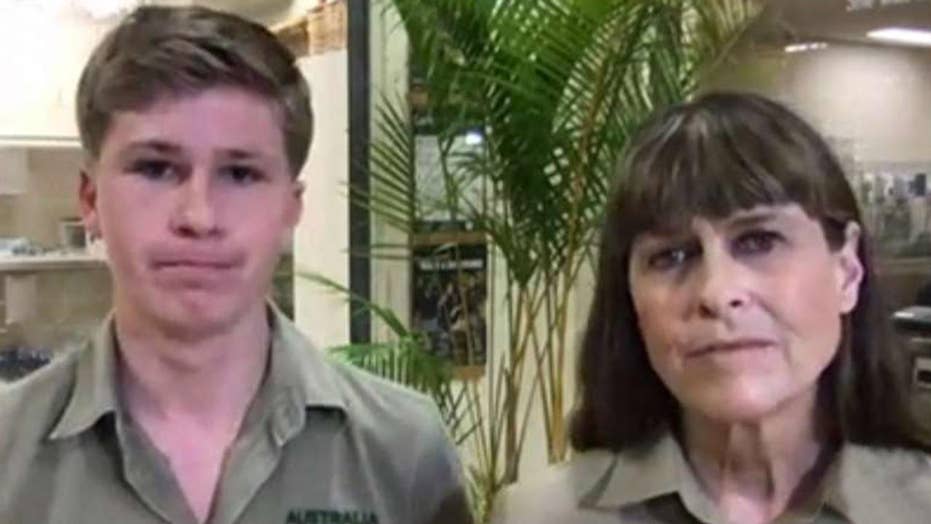 The wife and son of the late Australian zookeeper and popular television personality Steve Irwin -- also known as "The Crocodile Hunter" -- said  Monday that they are helping the animals affected by the devastating wildfires ravaging parts of Australia.

She added, “Koalas make the headlines, but everything is getting injured, birds, reptiles, you name it. And the people on the front lines are doing a great job, but their facilities are getting evacuated.”

Australia's capital, Canberra, had the worst air quality of any major city in the world for much of Monday. The devastating fires have killed at least 25 people in Australia and destroyed 2,000 homes, so far scorching an area twice the size of Maryland.

More than 135 fires were still burning across New South Wales, including almost 70 that were not contained. Officials have warned that Monday’s rain won't put out the largest and most dangerous blazes before conditions deteriorate again.

Officials also warned that Australia's wildfire season -- which generally lasts through March -- was nowhere near its end.

On Kangaroo Island, a refuge off the coast of South Australia state for some of the country's most endangered creatures, teams had arrived to help euthanize livestock and wild animals injured in the blazes. Hundreds of millions of animals are believed to have died already in the fires across the country.

He added, “Of course, it’s the injuries you would expect, smoke inhalation and burns, but more than that, as these animals are trying to flee these areas, they’re coming in contact with places animals shouldn’t be. So they’re crossing roads, getting hit by cars, coming into contact with domestic animals, so there’s a lot of different injuries that we’re getting.”

“We’re really just overrun at the moment,” He continued. “Our fruit bat intake has gone up by about 750 percent, so even though we’ve helped 90,000 animals over the years, it’s really grown exponentially over the last few days.”

His mother Terri said volunteers are transporting the injured animals to them by air and “we’re seeing hundreds of animals being transported.”

She said for those interested in helping, donations can be made to Wildlifewarriors.org.au.

“The funds are going directly to medical supplies that we’re sending south and adding facilities and helping these animals that need it so much,” she said.

Robert added that helping the injured animals is honoring his father’s legacy. He was 2 when his father was killed in 2006 by a stingray while filming off the Great Barrier Reef.

“For us, as a family, it is such an honor for me and my sister and my mom to really get to follow in his footsteps and make sure that his message lives on,” Robert said on Monday. “I think in this day and age, our wildlife all over the world, are having a really tough time and it’s important for everyone to step up and do their part, but we are really excited to get to honor him in times like this, with the wildfires. I know he would have been in a lot of distress with what’s going on.”