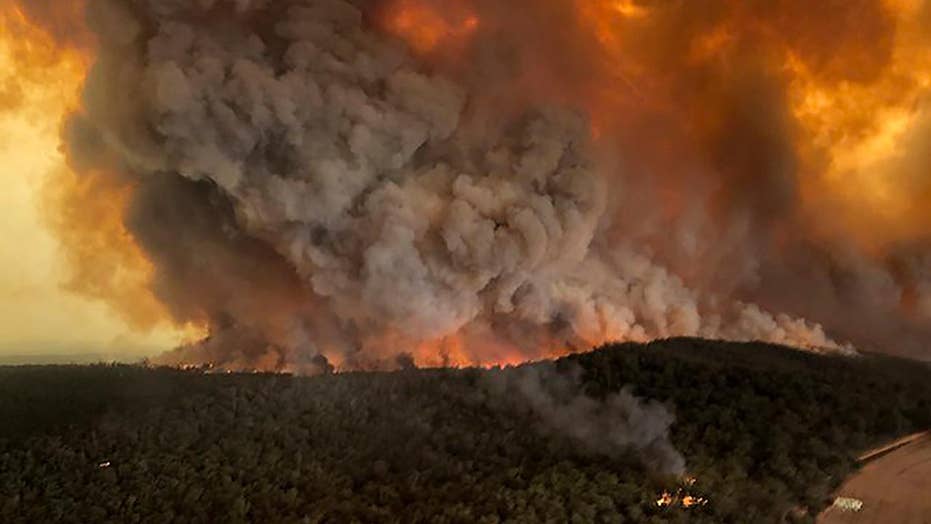 At least 18 people have died, another 17 are missing and 1,200 homes have been destroyed.

Australia’s navy rescued hundreds of people stranded on a Victoria beach Friday as more than 200 wildfires continue to rip through the nation’s eastern states, prompting the largest peacetime evacuation in the country's history.

At least 19 people are dead and 28 more are missing after hundreds of fires scorched more than 12.35 million acres of land, destroying at least 1,400 homes in three states.

Victoria Premier Daniel Andrews declared a disaster across much of the coastal part of the state, allowing the government to order evacuations in an area with as many as 140,000 permanent residents and tens of thousands more vacationers.

“If you can leave, you must leave,” he warned

In the coastal town of Mallacoota, more than 4,000 residents and tourists took to the beaches to seek shelter as the wildfires drove them out. The navy evacuated hundreds using a landing craft to ferry residents to the HMAS Choules vessel located offshore.

Evacuees walk down to the beach to board vessels and be ferried out to the navy's HMAS Choules, Friday, Jan. 3, 2020, in Mallacoota, Victoria, Australia. (Australia Department of Defense via AP)

Choules Commander Scott Houlihan said 963 people had signed up for evacuation by sea and more had been airlifted to safety.

In New South Wales, a state of emergency and a total fire ban were in place. State Rural Fire Service deputy commissioner Rob Rogers urged people to not wait to leave, noting four people in the state died in their cars as they made late attempts to flee.

"We know people have got a little bit of fire fatigue. They've been dealing with this now for months," he said. “But we need people to stay focused. Tomorrow is not the day to drop your guard. Take it seriously. If you're in those areas where we put those maps out, do not be there.”

Evacuees are transported in a lighter, amphibious, resupply, cargo (LARC) amphibious vehicle, from Mallacoota, Victoria, on Jan. 2, 2020. Navy ships plucked hundreds of people from beaches and tens of thousands were urged to flee before hot weather and strong winds in the forecast worsen Australia's already devastating wildfires. (Australia Department of Defense via AP)

An early and extremely warm start to Australia’s summer has led to one of the worst wildfires on record.

The worst of the fires have been in New South Wales where 9.8 million acres of land have been burned here alone, the BBC reported. Flames of up to 230 feet high have been reported in some areas.

Strong winds, extremely dry weather and record-breaking temperatures of around 104 degrees Fahrenheit have created the perfect storm to allow the fires to spread at a rapid speed since late November.

"The ignition sources are already there," Country Fire Service chief officer Mark Jones said. "There are millions of sparks out there ready to go if they break containment lines."