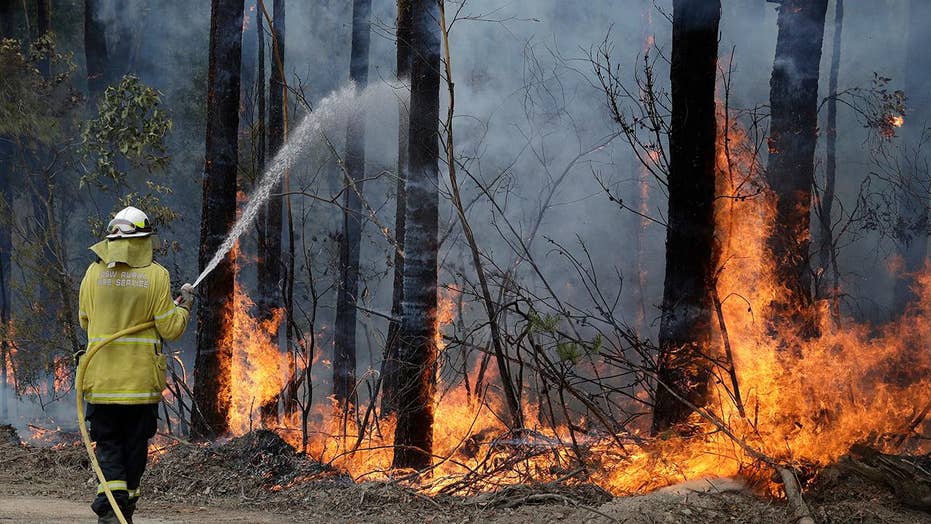 A new set of evacuations was ordered Thursday in parts of Australia as hot and windy temperatures are forecast to bring "dangerous, dynamic" conditions that may further fuel fast-spreading wildfires as the country's leader had yet another embarrassing moment when visiting a community impacted by the blazes.

The New South Wales Rural Fire Service urged the communities of Nowra, Narooma and Batemans Bay, located south of Sydney, to evacuate over fears that northwesterly winds were likely to once again drive blazes toward the coast. In neighboring Victoria state, fire-threatened populations were urged to act quickly on evacuation warnings.

“If you can get out, you should get out,” Andrew Crisp, Victoria's emergency management commissioner, told reporters. “Because tomorrow is going to be a dangerous and dynamic day.”

AUSTRALIA'S SEVERE DROUGHT LEAVES UP TO 10,000 FERAL CAMELS AT RISK OF BEING SHOT

Temperatures in the area that may be threatened by wind change are expected to reach more than 110 degrees Fahrenheit on Friday, and conditions remained tinder dry.

The fires, fueled by drought and the country’s hottest and driest year on record, have been raging since September, months earlier than is typical for Australia’s annual wildfire season. So far, the blazes have killed 26 people, destroyed 2,000 homes and scorched an area of about 25.5 million acres, roughly the size of South Korea.

In the New South Wales state, 132 fires were still burning as of early Friday, around 55 of which were uncontrolled.

“We can't guarantee your safety and we don't want to be putting emergency services — whether it be volunteers or paid staff — we do not want to put them in harm's way because people didn't follow advice that was given,” Victoria Premier Daniel Andrews told reporters.

As the blazes have raged across parts of the country, vacationers in places such as the coastal town of Mallacoota have been forced to retreat to beaches and into the ocean in recent weeks as destructive fires and choking smoke have encroached on the tourist towns.

Prime Minister Scott Morrison, who has come under withering criticism both at home and abroad for what many perceive as his slow response to the crisis by downplaying the need for his government to address climate change, found himself again on defense Thursday after visiting a community ravaged by the flames.

During a visit to the fire-ravaged Kangaroo Island on Thursday, Morrison had an awkward exchange with locals. In a video of his visit to the island, where an outback safari operator and his son were killed in the blazes, Morrison was seen telling locals: “Thankfully, we’ve had no loss of life.”

This is a Terra satellite image of Kangaroo Island on Jan. 7, 2020. (NASA Worldview)

After he was corrected, he continued: “Yes, two, that’s quite right. I was thinking about firefighters, firstly.”

It was the latest in a string of gaffes for Morrison, who created a public uproar when he took a family vacation to Hawaii in the middle of the disaster. He has tried to strike a more compassionate image since, and earlier this week promised the government would commit an extra 2 billion Australian dollars ($1.4 billion) toward the fire recovery effort.

“Tomorrow’s going to be a very difficult day in the eastern states,” Morrison said during a news conference on Thursday. “Once again, I express my sincere condolences and sympathies to the families of all of those who have lost loved ones during the course of this terrible disaster. We will continue to remember them, but also their families in particular in what they need, in supporting them.”

On Tuesday, the National Interagency Fire Center in Boise, Idaho said at least 100 firefighters from the U.S. will join 159 already in the Australia battling wildfires. It's the largest ever deployment of U.S. firefighters abroad.

A sign is displayed beside a burned-out house near Mogo, Australia, Thursday, Jan. 9, 2020, thanking "firies" a colloquial term for firefighters. (AP Photo/Rick Rycroft)

Officials are working to send the additional firefighters to Australia quickly so they can assume wildfire management and aviation management roles. The most recent contingent of firefighters dispatched to Australia included crews that fight fires on the ground, based in the U.S. Forest Service's Angeles National Forest in California.

Center spokeswoman Carrie Bilbao told the Associated Press the next group will also include more ground crews and that they are receiving training about poisonous snakes and insects they might encounter while fighting wildfires in Australia.

Warmer temperatures are in the forecast again as devastating wildfires continue to rage in Australia; Jeff Paul reports from Bewong.