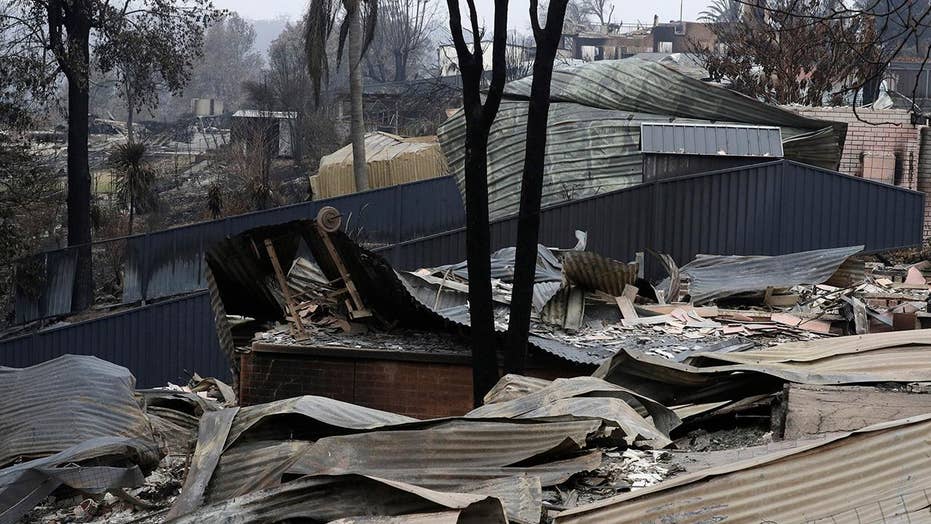 2,000 homes may have been lost in Australia wildfires

Insurance claims in Australia are estimated to be $500 million as fires still burn; Jeff Paul reports from New South Wales.

Firefighters battling out-of-control wildfires that have killed at least 25 people, hundreds of thousands of animals and scorched millions of acres across Australia are getting well-needed reinforcements from the U.S., including a team of veteran fire crews from California.

The National Interagency Fire Center in Boise, Idaho, which is mobilizing U.S. resources in response to Australia's requests for international firefighting aid, said a new batch of 20 veteran firefighters based in the Angeles National Forest north of Los Angeles departed on Monday for the region.

"As the extreme fire danger continues across Australia, the Department of the Interior will continue to do all that we can to support requests for assistance," Craig Leff, director of the Department of the Interior's Office of Wildland Fire, said in a statement. "Our focus remains on helping the people of Australia and keeping people safe in these unprecedented conditions."

Federal agencies such as the U.S. Forest Service and the Bureau of Land Management already have provided a few dozen people, most of them with experience managing fires, a forest service spokesperson said Saturday.

A crew of firefighters from the U.S. that have arrived in Australia to help combat the deadly blazes. (National Interagency Fire Center)

The crew that left on Monday who left on Monday from Los Angeles International Airport will replace a group of personnel sent to Australia in early December. They include hot-shot and helicopter crew members with experience attacking fires early before they grow into large infernos, according to Angeles National Forest Fire Chief Robert Garcia.

The firefighters, 18 men and two women, said they were anticipating "strong fire behavior" and were preparing on what to expect based on their own experience battling wildfires in Southern California.

"We're in an area where we are getting fires all the time, we're kinda known for it, for getting fires, so I think we can translate that over [and] just see what the lay of the land would be out there," Forest Service Firefighter Jorge Perez told FOX11.

The Pacific Northwest Region of the Forest Service said that over 100 fire personnel from the U.S. have been working with counterparts in Australia as they struggle to combat the devasting blazes.

"We send well-wishes of rain, lower temperatures & decreased winds," the agency recently tweeted. "Thank you for your efforts!"

Australia and New Zealand have been sending firefighters to the United States for more than 15 years, most recently in August 2018, when 138 came to help battle fires in Northern California and the Northwest. The last time U.S. firefighters worked in Australia was 2010.

“Our thoughts and prayers, with our deepest condolences, are with the Australia firefighters and public who have lost their lives and homes," U.S. Forest Service Fire Director Shawna Legarza said in a statement. “We are proud to provide personnel from the United States and will continue to support Australia with the resources needed during this unprecedented fire situation.”

In the New South Wales state, 130 fires were still burning on Tuesday, around 50 of which were uncontrolled. Among those killed in the blazes are volunteer firefighter Andrew O'Dwyer, who perished on Dec. 19 after a tree fell into the path of the fire engine he was traveling in with colleague Geoffrey Keaton, 32, who was also killed.

During his funeral in Sydney on Tuesday, his young daughter Charlotte was presented with a service medal and was pictured wearing her father's hat.

Nineteen-month-old Charlotte received the medal from rural fire service commissioner Shane Fitzsimmons, who wept as he read out a tribute to her 36-year-old father during the service, according to Sky News.

"Charlotte should know her father was a selfless and special man, who only left because he was a hero," Fitzsimmons said.

On Tuesday, cooler and rainier weather was providing thousands of weary firefighters a “psychological and emotional” reprieve as they scrambled to strengthen containment lines around the blazes before temperatures rise again, according to Fitzsimmons.

“It really is about shoring up protection to limit the damage potential and the outbreak of these fires over the coming days,” he told the Australian Broadcasting Corp.

The rain was also complicating firefighters’ attempts to strategically backburn certain areas and was making the ground slippery for fire trucks.

Victoria state Emergency Services Minister Lisa Neville said on Monday at least 8 inches of rain would need to fall in a short time to snuff out the fires — around 20 times what has fallen across the region in the past day. And officials warned that Australia's wildfire season, which generally lasts through March, is nowhere near its end.