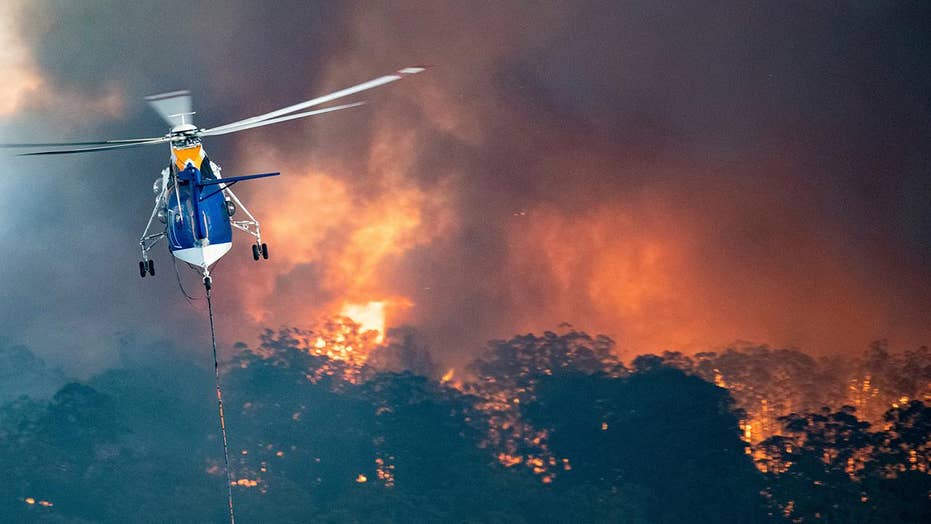 Tens of thousands of people have been ordered to leave parts of Australia's wildfire-ravaged eastern coast ahead of worsening conditions as the heat also appeared to be turning up on the country's prime minister for his handling of the crisis.

Authorities in the New South Wales state on Thursday morning ordered tourists to leave a 155-mile zone along the country's south coast that's popular during the summer holiday season, warning people "do not be in this area on Saturday."

State Transport Minister Andrew Constance said it is the “largest mass relocation of people out of the region that we've ever seen.”

This week alone, 381 homes have been destroyed on the New South Wales southern coast and at least eight people have died in the state and in neighboring Victoria, Australia's two most-populous states, where more than 200 fires are currently burning.

In this Monday, Dec. 30, 2019, aerial photo, wildfires rage under plumes of smoke in Bairnsdale, Australia. (Glen Morey via AP)

The early and devastating start to Australia’s summer wildfires has led authorities to rate this season the worst on record. About 12.35 million acres of land have burned, at least 17 people have been killed and more than 1,400 homes have been destroyed. The total number of acres burned in Australia this season reportedly approach an area larger than the countries of Belgium and Haiti combined.

Prime Minister Scott Morrison said the crisis was likely to last for months.

In this Monday, Dec. 30, 2019, aerial photo, acres of scorched land are seen in Bairnsdale, Australia. (Glen Morey via AP)

“It will continue to go on until we can get some decent rain that can deal with some of the fires that have been burning for many, many months,” he told reporters on Thursday.

While weather conditions were forecast to worsen by the weekend with the return of high winds and high temperatures, Morrison already faced a different kind of scorching heat during a visit to a wildfire-ravaged town in the region. The prime minister was touring Cobargo to get an update on the devastation as a result of the fires on Thursday when locals told him he was not welcome in their town.

At least 18 people have died, another 17 are missing and 1,200 homes have been destroyed.

"How about the money for our forgotten corner of New South Wales, Mr. Prime Minister?" one woman could be heard shouting. "How come we only had four trucks to defend our town. Because our town doesn't have a lot of money, but we have hearts of gold, Mr. Prime Minister."

Another person shouted: "You're an idiot mate, you really are."

Other locals claimed that the response could have been different if the most severe fires were happening in Sydney or luxury areas north of the city.

"Go home to Kirribilli. Why won't that burn down?" another local yelled, referring to the government residence in Kirribilli where Morrison watched fireworks on New Year's Eve, according to Australia's Nine News.

Others made offensive hand gestures as the confrontation grew tenser.

"You won't be getting any votes around here buddy. You're an idiot. What about the people 'round here? Nobody. No liberal votes. You're out, son. You are out," one man shouted, according to Sky News. "Goodnight Vienna. Bye. Go on, p*** off."

Morrison told the Australian Broadcasting Corporation after the confrontation that he understood people had "strong feelings" after losing everything.

"I'm not surprised people are feeling very raw at the moment," he said. "That's why I came today, to be here, to see it for myself [and] offer what comfort I could."

It's the third state of emergency for New South Wales in the past two months, after previously not being implemented since 2013.

Thousands of tourists fled Australia's wildfire-ravaged eastern coast Thursday ahead of worsening conditions as the military started to evacuate people trapped on the shore further south. (Glen Morey via AP)

“We don’t take these decisions lightly but we also want to make sure we’re taking every single precaution to be prepared for what could be a horrible day on Saturday,” Berejiklian said.

In Victoria, where 83 homes have burned this week, the military was helping thousands of people who fled to the shore as a wildfire threatened their homes Tuesday in the coastal town of Mallacoota. Food, water, fuel, and medical expertise were being delivered and about 500 people were going to be evacuated from the town by a naval ship.

“We think around 3,000 tourists and 1,000 locals are there. Not all of those will want to leave, not all can get on the vessel at one time,” Victoria Premier Daniel Andrews told the Australian Broadcasting Corporation.

A contingent of 39 firefighters from the United States and Canada landed in Melbourne on Thursday to help with the catastrophe.