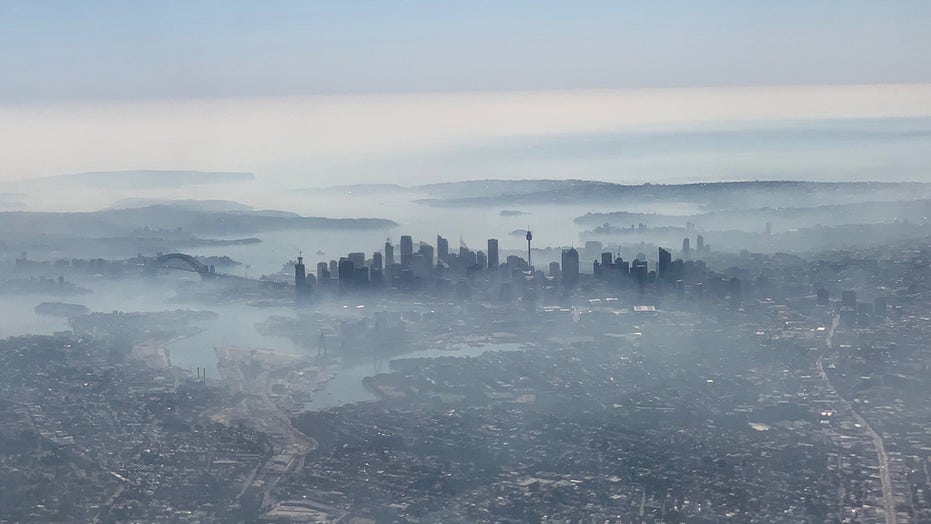 The largest city in Australia was shrouded in smoke on Tuesday, causing dozens to seek medical treatment after wildfires pushed the air quality to beyond "hazardous" levels across the region.

Residents of Sydney woke to the city skyline obstructed with a think haze that made it difficult to see the city's high-rise buildings.

Most of the coastal areas of New South Wales, where Syndey is located, are under very high fire danger with 48 fires burning across the state

An image taken from a plane shows the extent of the haze throughout the entire metropolitan area.

The thick layer of smoke caused dozens of area residents to require medical assistance as the city's air quality ended up in the top 25 worst rankings on the World Air Quality Index.

Health officials had warned people with asthma and other breathing issues to stay indoors and avoid outdoor exercise.

"Western Sydney has been particularly heavily affected as a result of the proximity to the bushfire burning just north of Sydney," NSW Ambulance Superintendent Jordan Emery told the Australian Broadcasting Corporation.

Smoke haze covers Sydney on Tuesday as wildfires have caused the air quality in the city to reach hazardous conditions. (AP Photo/Rick Rycroft)

At least 60 people have been treated so far by paramedics due to health complications from the smoky conditions, according to the agency.

Shane Fitzsimmons, the state’s rural fire commissioner, said that firefighters would be challenged in the next few days by high temperatures and wind conditions.

The high temperatures and bad air quality are causing an additional health risk to residents in the Sydney area, according to health officials.

"If you are somewhere where it's smoky it continues to be really important to avoid outdoor physical activity if you can," said Dr. Richard Broome, NSW Health's Director of Environmental Health. "Especially if you're someone who has a chronic respiratory or heart condition and are more sensitive to smoke."

The annual Australian fire season, which peaks during the Southern Hemisphere summer, has started early after an unusually warm and dry winter. Fires have destroyed 577 homes in New South Wales so far this season, and the danger is expected to continue for the foreseeable future.

NSW Rural Fire Service said that there are 55 bush and grass fires that continue to burn across the region, with 25 yet to be contained.

The fire risk is expected to continue across South Australia, with evacuations ordered and school districts located in the region near Adelaide, Nine News reported.