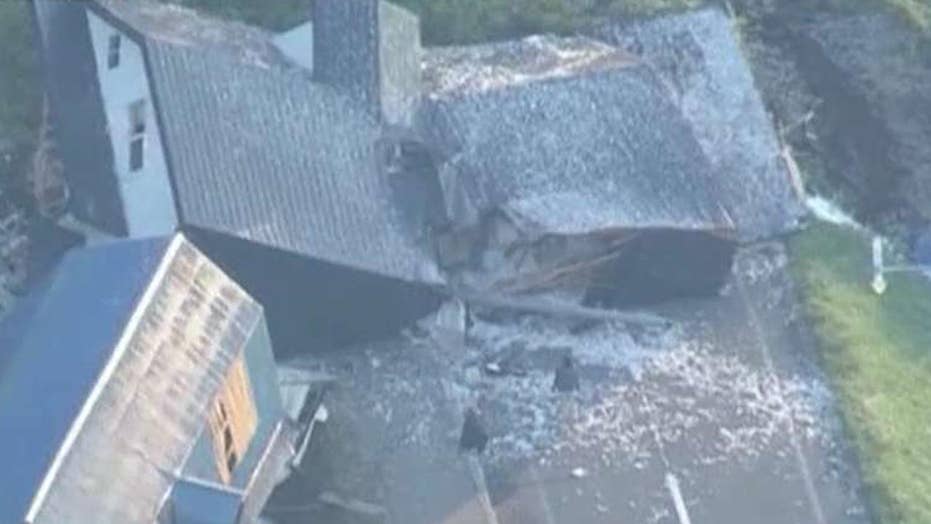 Rescuers scramble to save people trapped under rubble.

At least seven people have been confirmed dead and more than 30 people were unaccounted for after a magnitude 6.7 earthquake struck Japan's northernmost main island early Thursday.

The quake rocked southern Hokkaido at 3:08 a.m. local time, Japan's Meteorological Agency said. The tremor triggered landslides that crushed homes and forced a nuclear power plant onto a backup generator after it was damaged.

The agency said the quake did not pose a tsunami risk.

The epicenter was east of the city of Tomakomai. The powerful shaking damaged homes and cleaved apart roads in the prefectural capital of Sapporo, with a population of 1.9 million.

In the nearby town of Atsuma, dozens of residents were reported missing after a massive landslide consumed homes beneath a sea of soil, rocks and timber.

Reconstruction Minister Jiro Akama told reporters that five people were believed to be buried in the town's Yoshino district. Some of the 40 people stranded there were airlifted to safer grounds, NHK said.

The site of a landslide after an earthquake in Atsuma town, Hokkaido, northern Japan, Thursday. (Kyodo News via AP)

More than 290 citizens were reported injured. As rescuers desperately searched for survivors beneath the landslides, the death toll was expected to rise.

Reuters reported that the latest natural disaster to strike Japan knocked out power to all 5.3 million of Hokkaido’s residents.

Economy, Trade and Industry Minister Hiroshige Seko told reporters that the extensive power outage was caused by an emergency shutdown of the main thermal power plant at Tomato Atsuma that supplies half of Hokkaido's electricity.

Seko said utilities were planning to start up several other thermal and hydroelectric plants to provide at least some power. However, full power could take more than a week to be restored, he said.

In the meantime, authorities sent power-generator vehicles to hospitals so enable them to treat emergency patients, he said.

People line up outside a supermarket due to rush to buy supplies after an earthquake, in Biei town, Hokkaido, northern Japan, Thursday. (Mika Takeda via AP)

The BBC reported that residents wrote on social media of long lines at food stores as they prepare for aftershocks.

"Only a few cartons of instant ramen were left," said Mika Takeda, who lives in the town of Bei. The one local gas station was limiting customers to only 20 liters (5 gallons) of gas, she said.