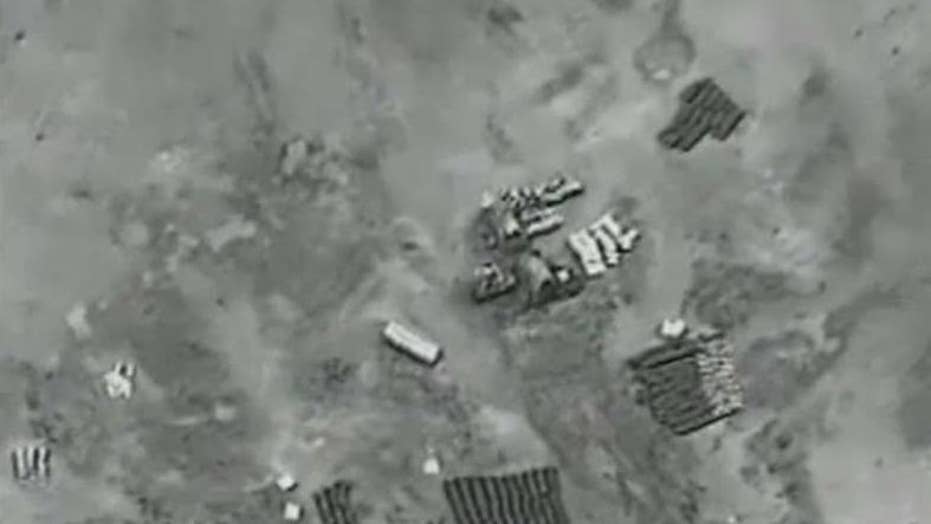 US drops record number of bombs on Taliban in Afghanistan

Lucas Tomlinson reports on the escalating military campaign in the region.

As the war against the Islamic State terror group winds down in Iraq and Syria, the U.S. military is increasingly turning its attention to Afghanistan.

In April 2017, American and allied jets dropped over 3,000 bombs on ISIS in Iraq and Syria.

But a year later, aircrafts dropped just 254 bombs, a sign of how much the war against ISIS has changed, according to a new strike report released over the weekend from the U.S. Air Force.

Throughout April, the U.S. military dropped the second-highest amount of bombs in Afghanistan in six-and-a-half years, the Air Force report said. The 562 bombs dropped in Afghanistan last month were more than the combined March and April totals in Iraq and Syria.

The 12 A-10s were originally headed for an airbase in Turkey to fight ISIS, but with the air war largely over in Iraq and Syria, military brass decided the jets and more drones were needed at Kandahar Airfield in Afghanistan to ramp up the fight against the Taliban.

As of early May, ISIS holds only two small pockets of territory in eastern Syria, and none in Iraq.

U.S.-backed fighters from the Syrian Democratic Forces (SDF) have since returned to eastern Syria following Turkey’s incursion into northwest Syria, drawing Kurdish fighters from the fight against ISIS. The SDF recently announced it is once again fully committed to defeating ISIS.

Air Force A-10 jets and drones were recently called to thwart a battle against the Taliban in western Afghanistan, when the city of Farah was threatened.

U.S. airstrikes on May 15 in Afghanistan killed 28 Taliban fighters, according to the military. (Department of Defense)

US SERVICE MEMBER KILLED IN AFGHANISTAN JUST WEEKS BEFORE DEPLOYMENT WAS TO END, OFFICIALS SAY

According to the latest numbers, the U.S. Air Force dropped two-times more bombs in Afghanistan than Iraq and Syria last month, as the Afghan spring offensive against the Taliban ramps up.

The U.S. Air Force said that Afghan jets recently helped destroy 29 Taliban narcotics labs as a way of cutting off a key revenue source for the Taliban.

Overall in 2018, the U.S. military has dropped more bombs in Iraq and Syria than Afghanistan, despite the recent uptick in strikes against the Taliban last month.

Defense secretary arrives in Kabul for an unannounced trip, says elements of the Taliban are clearly interested in talking to the Afghan government.

The Air Force says it marked the first time the AGM-158 Joint Air to Surface Standoff Munition (JASSM) was used in combat.

Last year, U.S. and allied jets and drones fired more than 40,000 bombs and other munitions against ISIS in Iraq and Syria, compared to over 4,000 in Afghanistan against the Taliban and an ISIS off-shoot.

U.S. commanders recently called Afghanistan the “main effort” for American forces in the Central Command, which is responsible for American military operations in the Middle East and South Asia, including Afghanistan.