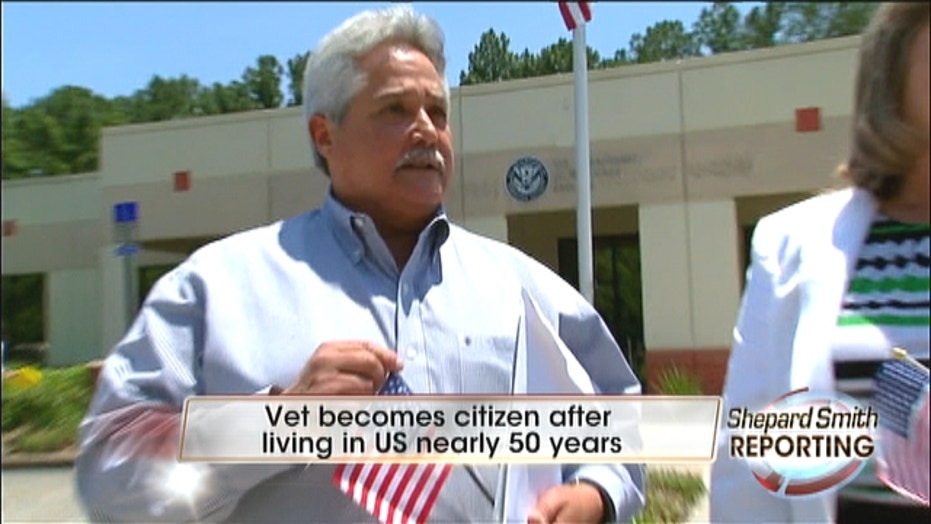 Jacksonville, Florida – Today goes down as one of the most rewarding days of Mario Hernandez’s decades-long, USA-dedicated life. Finally, after nearly half a century, he’s official.

After his family fled Cuba in the 1960s, he arrived in Miami, got his special immigration parole status and moved to California.

He later joined the U.S. Army during the Vietnam era, serving proudly. He then worked for two state and two federal agencies, with more than 20 years at the Justice Department’s Bureau of Prisons.

There, he performed national security, watching over terrorists like Tim McVeigh and Terry Nichols. He has a Social Security card, proudly voted in every election since 1976 and always paid his taxes on time.

But it turns out, he has never been what he thought he was. He was not a U.S. Citizen. And perhaps the most stunning thing about it: no one in the government ever noticed.

“I feel like a man … without a country,” says Hernandez.  “It has literally been — it’s like I’ve said — been punched in the stomach and everything that I always thought I stood for, has been for naught.”

Hernandez and his wife of 30 years, Bonita, only discovered this when they were booking a Caribbean Cruise to celebrate retirement. He needed a passport. And that’s when U.S. Customs and Immigration Services told him that, not only was he not a citizen, he wasn’t even a U.S. permanent resident. USCIS concedes that Hernandez got lost in the cracks in what is one of the most unique bureaucratic oversights anyone there can recall.

Hernandez’s attorney is less reserved about explaining how this happened after all these years, especially in light of the fact that being a U.S. citizen is a requirement to work for the Bureau of Prisons.

“I’m embarrassed for our government,” says Elizabeth Ricci, they made an “error, over and over, constantly slipping through the cracks, left hand doesn’t know what the right is doing, over and over and over again, to his expense, to his detriment.”

"That is offensive. That’s not correct. It’s almost hurtful," she added.

But Wednesday morning in Jacksonville, Florida, legitimacy finally landed in Hernandez’s hands. He received his naturalization papers and was sworn in as the U.S. citizen he’s always been proud to be, albeit mistakenly.

Ricci says the law is specifically clear: anyone who served in the U.S. military during a “period of hostility,” as the Vietnam Era was, almost automatically is fast-tracked to citizenship. USCIS agrees it messed up.

But how, exactly, the Bureau of Prisons, which puts all employees through background checks every five years — including verifying citizenship — overlooked Hernandez’s status, remains unknown. A BOP spokeswoman issued Fox News this short statement:

“We are not able to comment on personal information regarding a former employee in light of the rules under the Privacy Act. BOP believes that, at the time he was hired, BOP complied with all existing laws, regulations and policies regarding citizenship.”

For a couple of hours on Wednesday, Hernandez’s experience continued to be bureaucracy run amok. USCIS told him because he lives in Tallahassee, only a federal judge can swear him in as a U.S. citizen and the next naturalization ceremony is July 4th.  For Hernandez, it was yet another disappointment.

But then, the call came in from the Tallahassee Court: swear Hernandez in today, on site in Jacksonville. And after a 10-minute ceremony and pledge recitation, Hernandez’s bizarre citizenship journey came to a happy ending.

Hernandez is no longer a man without a country. After decades of exemplary service, he’s a citizen of the United States of America.

“It’s not so much that it’s over, I feel like jumping and touching the sky. This is a great honor. It is the greatest feeling in the world.”