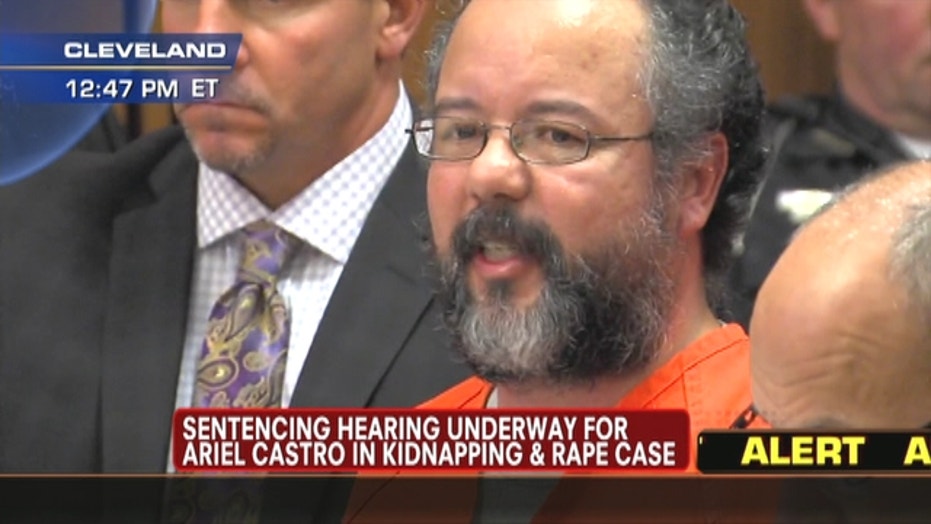 He was sentenced to life in prison after apologizing to his kidnapping victims then claiming they asked for sex.

First of all, I'm a very emotional person, so I'm going to try to get it out. I've stated before that I was a victim of sex acts when I was a child. This led me into viewing pornography throughout my whole life. Eventually after I held jobs because I always worked - what I'm trying to get at is these people are trying to paint me as a monster, and I'm not a monster. I'm sick.  My sexual problems have been so bad on my mind, I'm impulsive. But eventually I married, had four children, lived a normal life, but I still practiced the art of touching myself and viewing pornography. I believe I am addicted to porn to the point that it really makes me impulsive and I just don't realize that what I'm doing is wrong. I know it's not an excuse. I'm not trying to make excuses here, because I know, and I told Dave at Sex Crimes [FBI's Dave Jacobs] that I will be put away forever. I'm not contesting that.  I've been a musician for a long time - maybe 25, 30 years. You know, to be a musician, and to be a monster like they're trying to say that I am, I don't think I can handle that. I'm a happy person inside. I drove a school bus for 21 years, I did a very good job.

Towards the end I started slacking off, trying to get fired because I knew -- it was just too much. This job was too stressful, and coming home to my situation, you know, I just couldn't juggle both of them.  I never had a record until I met my children's mother. My son was on there the other day saying how abusive I was, but I was never abusive until I met her. But he failed to say that at the end, before she passed away, that them two weren't even talking, so what I'm trying to say is that what she's saying -- that I was a wife beater - that is wrong, because this happened because I couldn't get her to quiet down. I would continuous (sic) tell her "the children are right there, would you please" -- and she responded I don't care if the children are there, and she would keep going and the situation would escalate until the point where she would put her hands on me and that's how I reacted - by putting my hands on her, and it would escalate.

After living with her for 12 years, we separated, and I was single for about five years. In that time, I continued to practice the art of masturbation and pornography and it got so bad that I used to do it like maybe two or three hours a day, non-stop, and when I would finish I would just collapse right there. When I picked up the first victim, I didn't even plan it that day. It wasn't something that they're trying to make it look like I did, and I planned it and I was thinking about it, I didn't do that. That day I went to Family Dollar and I heard her oversay (sic) something about she needed to get somewhere, and I reacted on that. But when I got up that day, I did not say, "oh, I'm going to get up and try to find some women" because it wasn't my character. But I know it's wrong, and I'm not trying to make excuses here, I know I'm 100% wrong for doing that, but I'm just saying, they're trying to say that I'm a violent person. I'm not a violent person. Like I said, I drove a school bus, and was a musician. I had a family. I do have value for human life, because every time I came home, I would be so glad to -- of the situation, as crazy as it may sound. And my daughter- she just made every day for me, after she was born. She never saw any violence going on at that house, your Honor. If anyone will question her, she'll say the opposite. She'll probably say, "My dad is the best dad in the world", because that's how I tried to raise her in those six years. So she won't be traumatized or anything like that. She had a normal life in those six years. I tried to take her out into public to give her a normal life: "look, this is how it works". I would take her to church. I would come home and just be normal, like a normal family. These accusations that I would come home and beat her - beat them  - those are totally wrong, your Honor, because I, like I said before, I am not a violent person. I know what I did was wrong, but I am not a violent person. I simply kept them there without them being able to leave.

I know, when I picked up the second victim, which was Gina, I don't understand how I passed up my own daughter to pick her up, because I was driven by sex. And no, I did not know who she was. I saw her walking with my daughter, but I did not know that she was related to de Jesus' family. Because I know her dad. We went to school together. We didn't see much of each other in school, but I know him from school. Amanda, she got into my vehicle without even knowing who I was. I don't blame - I'm not putting fault at her, but I'm just saying - I'm trying to make up a point across that I am not a violent predator that they're trying to make me look, a monster, I'm not a monster, I'm a normal person. I am just sick. I have an addiction, just like an alcoholic has an addiction. Alcoholics cannot control their addiction. That's why I couldn't control my addiction, your Honor. But, most of the sex that went on in the house and practically all of it, was consensual. These allegations about me being forceful on them, that is totally wrong. Because there was times that they would even ask me for sex, many times. And I learned that these girls were not virgins from their testimony to me. They had multiple partners before me. All three of them. But, that's basically it. I just want to clear the record that I am not a monster. I did not prey on these women, I just acted on my sexual instincts because of my sexual addiction, and God is my witness, I never beat these women like they're trying to say that I did. I never tortured them. Finally, I would like to apologize to the victims, to Amanda Berry and Gina de Jesus and Michelle Knight: I am truly sorry for what happened.

To this day, I'm trying to answer my own questions, I don't know why, a man that had everything going on for himself, I had a job, I had a home, I had vehicles, I had my musical talent - I had everything going on for me, your Honor. I have a good history of working, providing. I just hope they can find in their hearts to forgive me. Because we had a lot of harmony going on in that home. And if you've seen the Youtube video of Amanda this weekend, that right there itself proves that that girl did not go through no torture, that woman - did not go through no torture. Because if that was true, do you think she would be out there partying already or having fun? I don't think so. I seen Gina, in the media. She looks normal. She acts normal. A person that's been tortured does not act normal, they would act withdrawn and everything. On the contrary, I heard the opposite. She's happy. The victims are happy. I haven't seen much of Michelle, because Michelle, since Day 1, no one missed her. I never saw no flyers out there about her.  But.. I feel that the FBI let these girls down, because when they, when they questioned, when they questioned my daughter, that's OK, but they failed to question me. I'm her father. If they would have questioned me, you know, too, whenever it happened, then, when Gina was missing, it's possible that it would have ended right there - so.  And also Dave forgot to mention that I did mention to him that I was addicted to porn. I am truly sorry to the deJesus family, Michelle and Amanda.

You guys know all the harmony that went on in that home. I ask God to forgive me. I ask my family, and I apologize to my family also for putting them through all this. I want to apologize to the State of Ohio, the City of Cleveland, for putting a dark cloud over the city. I just want to apologize to everybody who was touched by these events, but I do also want to let you know that there was harmony in that home. There was harmony in that home. I was a good person. Being brought up - I never had a record. I just hope that they find it in their hearts to forgive me and to maybe do some research on the people who have addictions, so they can see how their addiction takes over their lives. So again I'm sorry to all the victims, I'm sorry to my daughter because I know that, God bless her, she's a miracle cihld, and god bless the women too, but there was times. When she was born I know that I could have taken her, that's why she's a victim also. I could have taken her to the ER, and I chose not to.

Thank God that nothing happened, nothing bad happened, because just last year she started getting toothaches and I said to myself, "Im not going to let her die", because I know the infection could possibly take her life. I was just - the situation, your Honor, was I know, I'm lacking words, but that's part of the problem that I have also. I'll start talking and I'll just go blank. So I apologize to you, your Honor, for bringing this case even into your court. Again, thank you everyone and I'm sorry for everything. I know the two judgment days when God comes and judges me, but I've been reading the Bible,  I've been praying, and I've been asking for forgiveness due to the fact that I do have a sexual addiction, I don't know how he's going to judge me. I don't know the comment that the lady made from the deJesus family at the end, that was uncalled for. So again, thank you everyone, thank you victims, please find it in your hearts to forgive me. Thank you.