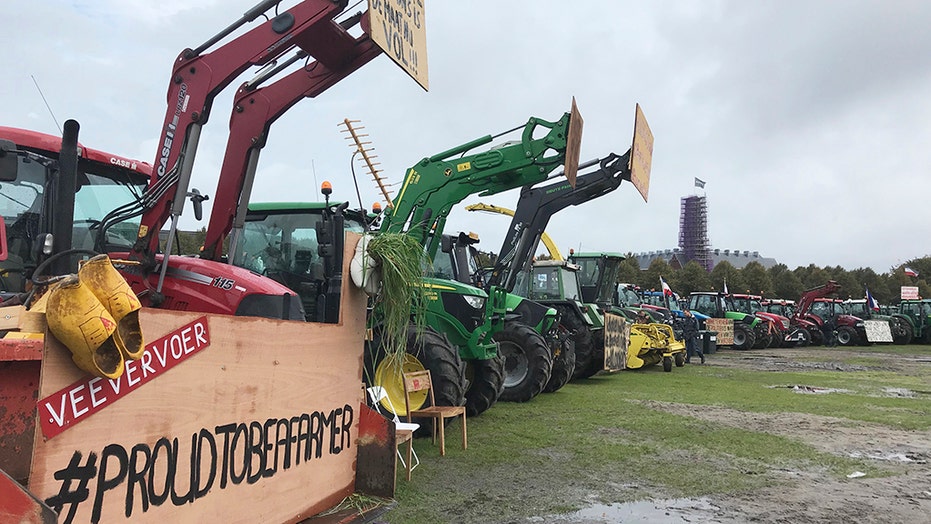 Slow-moving convoys of tractors clogged up nearly 700 miles of major highways in the Netherlands on Tuesday, as farmers inched toward The Hague to protest what they claim is an attempt to blame them over nitrogen pollution.

About 10,000 farmers planned the protest to argue they are unfairly being blamed after a court ruling found that the Netherlands is violating European emission rules.

EU GETS HEAVY-DUTY ON POLLUTION: 1ST STANDARDS FOR TRUCKS

"Farmers and growers are sick of being painted as a 'problem' that needs a 'solution,'" Dick Bruins of LTO, an agricultural industry group, said in a statement.

Tractors are lined up during a protest in The Hague, Netherlands, Tuesday, Oct. 1, 2019. (AP Photo/Mike Corder)

As the slow roll to The Hague continued, some farmers carried posters and signs that read: "No farmers, no food," according to the BBC.

"Some of the farmers in the Hague are driving over barriers, which causes damage and unsafe situations," her office said in a statement.

So far, police have arrested two demonstrators — one who plowed down a fence with his tractor and another who attempted to interfere with his arrest.

A worker walks past a truck with a banner saying: "The Hague: Cherish our farmers!", refrying to the government, as tractors driven by protesting farmers line up in the background during a protest in The Hague, Netherlands, Tuesday, Oct. 1, 2019. (AP Photo/Mike Corder)

"The police respect that farmers are standing up for their interest and we're trying to facilitate this demonstration with hundreds of tractors as well as possible," the police said in a statement where they pleaded with drivers to abide by traffic guides.

The idea that farmers are behind the bump in nitrogen pollution has prompted at least one political party official to suggest the country reduce the number of live animals it produces to cut down on the emission.

The Associated Press reported that a broad package of measures to tackle the increase in pollution includes a plan to grant financial aid to farmers who want to stop operations or adopt more eco-friendly agricultural practices.

Tuesday's protest showed there's a lot at stake for the farmers. According to LTO, exports from the Netherlands' nearly 54,000 farms and agriculture businesses were worth $98.3 billion last year.

"This is about our families, our future, the future of our children. It's about our way of life."

"This is about our families, our future, the future of our children," sheep farmer Bart Kemp, one of the protest's organizers, said during an emotional speech. "It's about our way of life."

Kemp said lawmakers "miss the common sense - farmer's sense- that nature and animals teach us." He also pleaded for a "new era in which the food producers of the Netherlands are listened to" by lawmakers.

Many building projects across the country have also been halted as the role of the construction industry as the possible culprit of the pollution problem has also been floated.