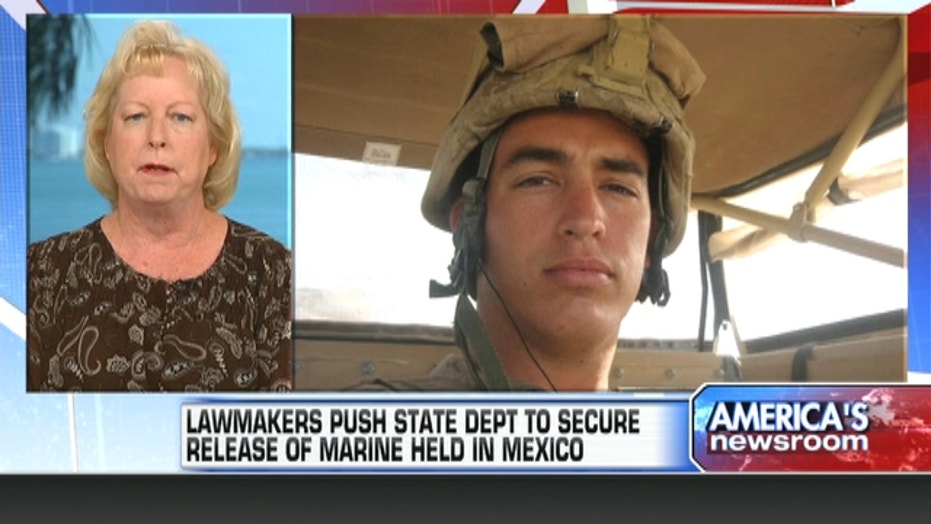 US marine's mom says he is feeling hopeful

The mother of the US marine held in a Mexican prison says his son feels much more hopeful after hearing of the efforts to bring him back.

In a small victory for a decorated U.S. Marine held on gun charges in a Mexican prison, authorities in the country have removed the four chains binding him to his cot amid growing pressure from American lawmakers, the Marine’s mother said.

Jill Tahmooressi’s son, Andrew, has been held inside La Mesa Prison in Tijuana since April 1, when he was arrested after unintentionally going into Mexico from California’s San Ysidro border crossing while carrying three, registered firearms. After an escape attempt and having his wounds treated at Tijuana General Hospital following a self-inflicted stabbing, he was placed in the jail infirmary with his arms and legs restrained.

Tahmooressi called his mother Friday to let her know that the shackles had been removed, but phoned her again on Monday to inform her that Mexican prison officials had once again restrained him by clamping a chain on one of his legs.

“Honestly, that’s a lot better than having all four of his limbs chained up,” an emotional Jill Tahmooressi told Fox News Latino. “He can at least stand up and exercise to get his muscle strength back.”

An active U.S. Marine reservist who served two combat tours in Afghanistan, including a 2010 stint in the violent Marjah district, Tahmooressi was moving to San Diego area with a Marine friend to be close to his treatment center for his post-traumatic stress disorder when he made a wrong turn into Mexico and ended up under arrest.

While on tour in Afghanistan, Tahmooressi suffered a severe concussion when an improvised explosive device (IED) upended his combat vehicle. He now suffers from what his mother, a nurse, calls directional dysfunctionality – frequently getting lost even in areas that he has driven in for years. The Marine reservist was also diagnosed with post-traumatic stress disorder (PTSD) on March 20, with his mother saying he suffered from bouts of depression and hyper-vigilance among other symptoms.

His mother, who lives in South Florida, and others close to Tahmooressi’s case say that his history of getting easily lost, paired with a lack of clear signage at the San Ysidro border crossing, led Tahmooressi to unwittingly enter Mexico.

U.S. legislators from both California and Florida have weighed in on Tahmooressi’s plight, pressuring both the U.S. State Department and Mexican officials to expedite the jailed marine’s release. U.S. Sen. Bill Nelson of Florida has sent letters to Secretary of State John Kerry imploring him to lobby for Tahmooressi’s release and U.S. Congressman Duncan Hunter of California has put pressure on Mexico.

“Mexico has its own laws and processes, and we have a responsibility as neighbors to acknowledge and respect each other’s systems,” Hunter said in a press release.  “But Andrew’s actions were not deliberate: it was not his intention to enter Mexico.  He simply got lost at the border on his way to meet a friend.  Andrew is not a weapons trafficker and he’s not a criminal.”

The first chance for any legal proceeding to begin in Tahmooressi’s case is May 28, when Mexican officials will hear the testimony from the Mexican border guards who arrested the marine in April. The long delay from arrest to the testimony – almost two months – have both Tahmooressi’s mother and lawmakers upset with the sluggish legal process in Mexico.

“Mexican authorities have set a hearing for the end of the month,” Hunter said. “That’s too long, knowing that Andrew’s safety and well-being are at risk. This entire situation can be resolved quickly, with Mexico expediting his proceedings and releasing him as soon as possible.”

Tahmooressi’s case is similar to that of Jon Hammar, a former Marine jailed in Mexico in December 2012 near the Mexican border with Texas after he declared an antique firearm while trying to cross the border.

“There’s no accountability process that goes on in Mexico,” Hammar’s mother, Olivia, told FNL on Tuesday. “It’s just not there.”