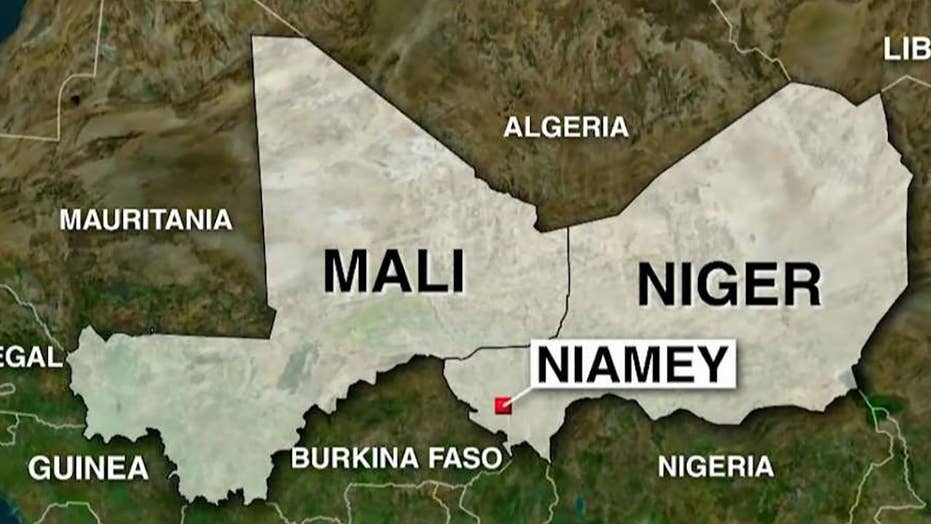 Terrorists suspected in deaths of 3 US Green Berets

Two other Special Forces soldiers were also wounded in the Niger ambush; Lucas Tomlinson has the story for 'Special Report.'

There was no U.S. surveillance drone overhead at the time of the ambush in Niger which killed three U.S. Army Green Berets and wounded two others Wednesday, multiple officials familiar with the matter tell Fox News.

In addition, Fox News has learned the dead and injured soldiers were taken from the firefight by French Puma helicopters. Only one U.S. helicopter was available to pick up the Green Berets. It is not clear why it wasn't used.

A senior Marine Corps general declined to comment on the lack of air cover at a Pentagon news conference Thursday.

"We are not prepared to go into details right now," said Lt. Gen. Kenneth F. McKenzie Jr., director of the Joint Staff.

The Pentagon has built two drone bases inside Niger, but the local government doesn't allow armed drone flights to protect U.S. troops, despite repeated requests from the U.S. military.

The two wounded special forces soldiers were flown to a military hospital in Germany where they are expected to recover.

The terror group Al Qaeda in the Islamic Mahgreb, or AQIM is suspected of carrying out the deadly attack. The U.S. military has been training local forces to fight AQIM and other militants in West Africa for over a decade.

U.S. officials tell Fox that ISIS fighters are finding a safe haven in West Africa as they are squeezed out of Syria and Iraq.

“It is inevitable that people will try to go what people call the coldest corner of the room. They tried to go to Libya, it didn't work out real well,” Lt. Gen. McKenzie said Thursday.

There are up to 6,000 U.S. troops on the African continent, 800 of whom are now on the ground in Niger. Most of those forces are stationed at the drone bases.

The State Department has warned of repeated cross-border attacks and kidnappings by AQIM fighters based in Mali, despite the best efforts of the French military which has battled the terrorist group for years.

AQIM terrorists were also behind the deadly 2013 attack on a large gas plant in Algeria where they took hundreds of hostages, including seven Americans, three of whom were killed.

Months later, the U.S. military agreed to bring drones to Niger to gather more intelligence on the terror group.