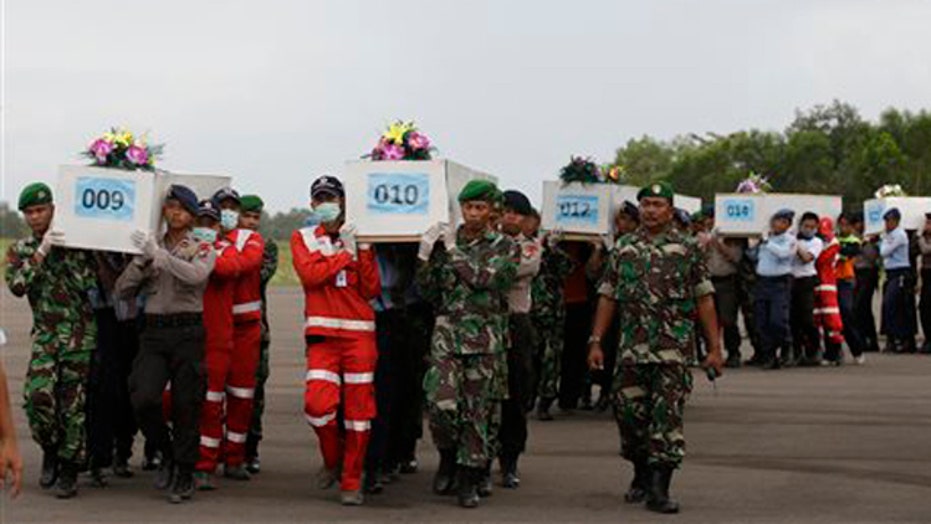 The pilot of AirAsia Flight 8501 may have landed the doomed plane on the ocean surface, only to have it sink in high seas, according to aviation experts, who cited the intact condition of several bodies as possible evidence for the theory.

"The emergency locator transmitter (ELT) would work on impact, be that land, sea or the sides of a mountain, and my analysis is it didn't work because there was no major impact during landing," Dudi Sudibyo, a senior editor of aviation magazine Angkasa, told the AFP. "The pilot managed to land it on the sea's surface."

The theory that passengers were alive at some point after impact appeared to be supported by Jusman Syafii Djamal, the former transport minister, who said that the fact that the emergency door was found intact may be evidence that the door was opened.

The Airbus A320 crashed into the Java Sea on Sunday with 162 people on board. Sixteen bodies have been recovered so far. Seven were announced Friday morning, six of which were found by a U.S. Navy ship, said Suryadi B. Supriyadi, operation coordinator for the National Search and Rescue Agency.

Jimmy Sponder, the CEO of Aviation Consultant Expert Solutions, was skeptical of the theory. Sponder, who told FoxNews.com that he worked for years on the same model plane that crashed, said there would have likely been survivors if the plane did land successfully.

More ships arrived Friday with sensitive equipment to hunt for the fuselage of AirAsia Flight 8501 and the more than 145 people still missing since it crashed into the sea five days ago.

Aviation expert Geoffrey Thomas in Australia said there's a chance the plane hit the water largely intact, and that many passengers remain inside it.

He added that bodies recovered so far would have come out with a breach in the fuselage. "But most passengers still should have had their seat belts on, particularly as the plane was going into weather. The captain would have still had the seat belt sign on."

Much of the crash remains a mystery. It's unclear what brought the plane down about halfway into its two-hour flight to Singapore. The jet's last communication indicated the pilots were worried about bad weather. They sought permission to climb above threatening clouds but were denied because of heavy air traffic. Four minutes later, the airliner disappeared from the radar without issuing a distress signal.

The black boxes hold key data that will help investigators determine the cause of the crash, but they have yet to be recovered. Items found so far include a life jacket, an emergency exit door, an inflatable slide, children's shoes and luggage.

Indonesia's Search and Rescue Agency chief Henry Bambang Soelistyo said efforts would be stepped up as long as the weather allowed.

"We will focus on underwater detection," he said, adding ships from Indonesia, Malaysia, Singapore and the U.S. had been on the scene since before dawn Friday to try to pinpoint wreckage and the all-important black boxes— the flight data and cockpit voice recorders.

But he said bad weather, which has hindered the search the last several days, was a worry. A drizzle and light clouds covered the area Friday morning, but rain, strong winds and high waves up to 13 feet were forecast until Sunday.

Soelistyo estimated the fuselage was at a depth of 80 feet to 100 feet, and vowed to recover the bodies of "our brothers and sisters ... whatever conditions we face."

The longer the search takes, the more corpses will decompose and the farther debris will scatter.