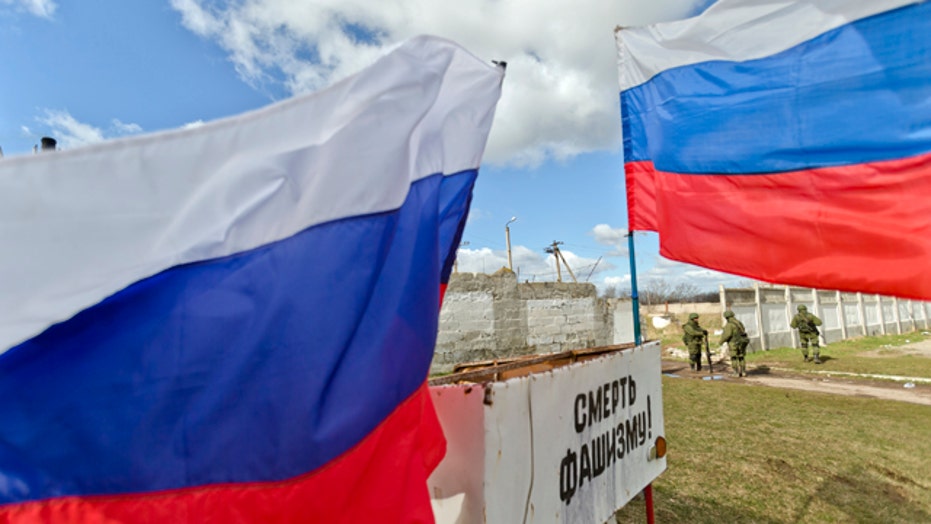 US announces sanctions against Russians after Crimean vote

Following an overwhelming vote to secede, the disputed Ukrainian peninsula of Crimea formally applied to join Russia Monday, and moved quickly to nationalize state property and two major energy companies, and set up a new central bank with millions of Russian dollars.

A statement on Crimea’s parliament website Monday said it proposed “to the Russian Federation to admit the Republic of Crimea as a new subject with the status of a republic,'' Reuters reported.

The proposal came after Crimea’s election chief Mikhail Malyshev said in a televised news conference Monday that the final tally of voters in favor of joining Russia was 96.77 percent. The announcement was merely confirmation of what had been expected once the referendum was announced by the region's parliament earlier this month.

When the Crimean parliament voted to formally declare its independence from Ukraine, it also voted on a resolution that all Ukrainian state property on the territory of the Black Sea peninsula be nationalized and become the property of the Crimean Republic. A delegation of Crimean lawmakers is set to travel to Moscow Monday for negotiations on how to proceed further.

Russian lawmakers have suggested that formally annexing Crimea is just a matter of time. Crimean lawmakers have also asked the United Nations and other nations to recognize it. Russia is also pushing for Russian to become Ukraine's state language.

Crimea’s parliament also voted to nationalize energy companies Chornomornaftohaz and Ukrtransgaz, it said on its website. Last week, a Crimean official had suggested the local authorities may sell the energy firm Chornomornaftohaz to a Russian company ``such as Gazprom'' once the region takes control of it, Reuters reported.

The deputy prime minister of Crimea says the region has set up a new central bank and is expecting to get $30 million in support from Russia. Rustam Temirgaliyev was quoted by the Interfax news agency as saying Russia will send to Crimea 1 billion rubles "in the coming days" to help it stabilize its financial situation. Temirgaliyev said the new central bank will later function as a regional branch of the Russian central bank.

Ukraine's new government did not immediately respond to the vote, but a foreign ministry spokesman rejected a Russian proposal Monday to dispatch an international ``support group'' to mediate the crisis and seek changes to the Ukrainian constitution.

``The statement of the Russian Foreign Ministry looks like an ultimatum,'' spokesman Yevhen Perebynis told the Interfax Ukraine news agency. ``The position as set out is absolutely unacceptable for the Ukrainian side.''

Ukraine is operating under a new government, which emerged after the pro-Russian President Viktor Yanukovych fled to Russia after three months of protests that culminated in deadly clashes. Russian lawmaker Vladimir Zhirinovsky said the annexation could take "from three days to three months," according to the Interfax news agency.

Valery Ryazantsev, head of Russia's observer mission in Crimea and a lawmaker from the upper house of the Russian parliament, said Monday that the results are beyond dispute. He told the Interfax news agency that there are "absolutely no reasons to consider the vote results illegitimate."

Opponents of secession appeared to largely stay away Sunday, denouncing the vote as a cynical power play/land grab by Russia. Officials said the turnout was 83 percent, well above the 50 percent that would make the referendum binding. Ethnic Ukrainian and Muslim Tatar minorities had said they would boycott the poll. Many Tatars -- who make up 12 percent of Crimea's 2 million people -- are fearful of a revival of the persecution they suffered for centuries under Moscow's rule.

``This is my land. This is the land of my ancestors. Who asked me if I want it or not?'' Shevkaye Assanova, a Tatar, told Reuters. ``I don't recognize this at all.''

Ukraine's new government in Kiev called the referendum a "circus" directed at gunpoint by Moscow, referring to the thousands of troops that now occupy the peninsula, which has traded hands repeatedly since ancient times.

But other locals were celebrating the vote. "Today is a holiday!" said 66-year-old Vera Sverkunova, breaking into a patriotic war song:

"I want to go home to Russia. It's been so long since I've seen my mama." Ethnic Ukrainians interviewed outside the Ukrainian Orthodox cathedral of Vladimir and Olga said they refused to take part in the referendum, calling it an illegal charade stage-managed by Moscow. Some said they were scared of the potential for widespread discrimination and harassment in the coming weeks, similar to what happened in parts of nearby Georgia, another former Soviet republic, after its 2008 war with Russia.

"We're just not going to play these separatist games," said Yevgen Sukhodolsky, a 41-year-old prosecutor from Saki, a town outside Simferopol. "Putin is the fascist. The Russian government is fascist."

The fate of Ukrainian soldiers trapped in their Crimean bases by pro-Russian forces was still uncertain. Many are surrounded by and under control of Russian forces, even though Moscow denies it has troops in the territory beyond facilities it leases for its important Black Sea Fleet. Crimea's pro-Russian authorities have said if those soldiers don't surrender after Sunday's vote, they will be considered "illegal."

Large numbers of Russian troops are also massed near the border with Russian-speaking eastern Ukraine, which has sharp political differences with the country's new government in Kiev. "This is our land and we're not going anywhere from this land," Ukraine's acting defense minister, Igor Tenyuk, was quoted as saying Sunday by the Interfax news agency.

But Tenyuk later said an agreement had been reached with Russia that its forces would not block Ukrainian soldiers in Crimea through Friday. It was not clear exactly what that meant.

The Ukrainian parliament endorsed a presidential decree for a partial military mobilization to call up 40,000 reservists to counter Russia's military actions Monday. In Donetsk, one of the main cities in eastern Ukraine, pro-Russia demonstrators called Sunday for a referendum similar to the one in Crimea and some of them stormed the prosecutor-general's office.

Vasyl Ovcharuk, a retired gaspipe layer who worked at Ukraine's Chernobyl nuclear disaster in 1986, predicted dark days ahead for Crimea. "This will end up in military action, in which peaceful people will suffer. And that means everybody. Shells and bullets are blind," he said.