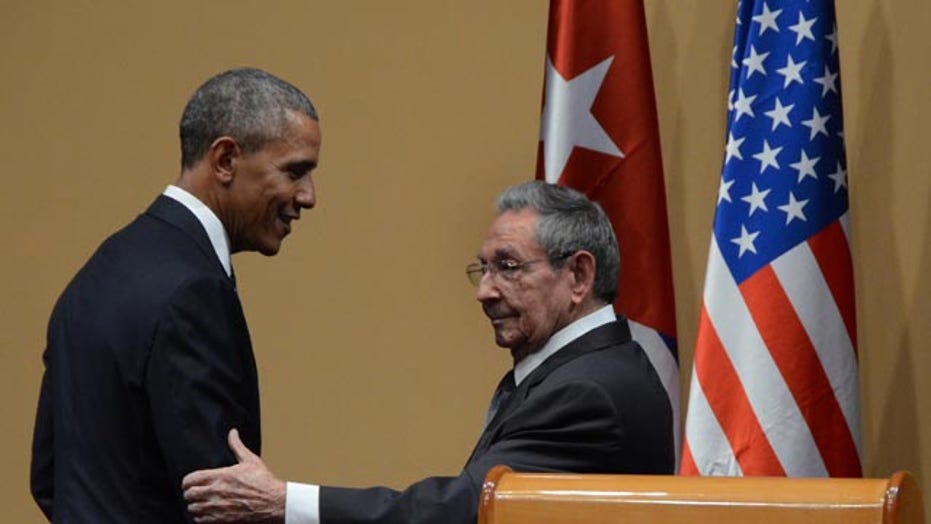 To talk about the president’s visit and the changes in Cuba is attorney Scott Gilbert, an expert on U.S.-Cuba relations.

According to 7SkyforceHD, 16 men including one young boy and eight women were seen in high spirits and in relatively good health after their exhausting journey, Tuesday.

Officials from Homeland Security and Florida Fish and Wildlife Conservation Commission arrived on the key soon after. Officials said the migrants made a fire to alert authorities that they had landed on the key and were then asked to extinguish the flames. They were given buckets of water to do so.

Nearly 30 minutes later, a small group of these migrants, including one child, were seen walking away from the shoreline and deep into the sandbar, towards a docked Homeland Security vessel.

The migrants were seen communicating back and forth with officials from both FWC and Homeland Security.

Officials said Miami Fire Rescue and Florida Fish and Wildlife were unable to dock the vessel at the shore due to the shallow waters, so the migrants had to make the short trek through the waters to get to the vessel.

Video captured two migrants propping up an exhausted fellow traveler by the arms as they walked together through the water.

The boat that brought them to Sands Key could not be found, said officials. “We believe that this was an organized maritime smuggling event by a smuggling organization,” said Lazaro Guzman of the U.S. Border Patrol.

One migrant was injured in the journey. “We diagnosed one subject as being in bad shape, and he was taken to a local area hospital, “Guzman said. “The other 23 seemed to be in good health.”

The mother of one of the migrants, Yeleni, was overcome with tears after finding out her daughter was among the group. “Yes, that’s my girl,” she said in Spanish.

Ironically, Yeleni’s mother is in Florida visiting from the Island and never expected to see her daughter here.

Another man spotted his son, Angel, among the group. “I never expected this. I saw it on the news, I didn’t expect none of this,” said Pedro Quintana through a translator.

Under the Wet Foot, Dry Foot policy, the group of migrants is allowed to stay in the United States.