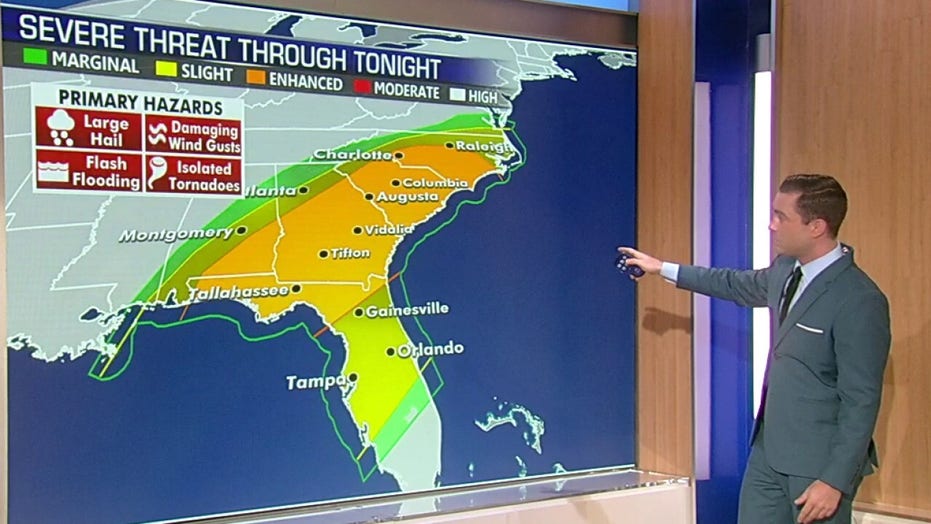 A powerful winter storm reaching from the Gulf Coast to the Northeast is packing heavy rain, frozen precipitation and high winds, and is blamed for at least one death.

The National Weather Service said the storm is bringing "widespread hazardous weather" across the eastern U.S., including the potential for tornados on Thursday. Several tornado warnings were reported in the Carolinas, with damage observed in Spartanburg, S.C.

WHERE'S THE SNOW? WHY PARTS OF THE NORTHEAST, MIDWEST SHOULD NOT 'WRITE OFF WINTER' JUST YET

Lines of severe thunderstorms moved early Thursday through Alabama, where one person was killed and another was injured. High winds destroyed two mobile homes near the town of Demopolis, the Storm Prediction Center reported.

It wasn’t immediately clear whether a tornado was to blame, but the Marengo County emergency manager said the deadly storm hit after 2 a.m., according to WBRC-TV.

A section of scaffolding at the Four Seasons Hotel construction site in New Orleans collapsed onto at least a dozen cars Wednesday, leaving at least one person injured, as thunderstorms and high winds moved through the area. (Sophia Germer/The Advocate via AP)

The line of storms brought several inches of rain and high winds to New Orleans, where scaffolding collapsed at the Four Seasons Hotel construction site downtown.

A portion of scaffolding is on top of cars at the former World Trade Center construction site after severe weather in New Orleans, La., Wednesday, Feb. 5, 2020. (Sophia Germer/The Advocate via AP)

One person was sent to the hospital and debris hit five vehicles, FOX8 reported. Hail pounded downtown streets and high winds shattered the glass of two revolving doors as the storms moved through.

More than 113,000 homes and businesses were without power across the South, according to poweroutage.us, and the rain was forecast to continue into Friday across much of the region. High winds in the Atlanta area caused a tree to fall onto a highway during the morning rush hour. Video from Dunwoody Police shows the tree striking a car.

"Please be careful! We are very thankful there were no serious injuries," police tweeted.

In this photo released by Adam Fowler, vehicles sit parked in on the side of a main road in floodwater, Wednesday, Feb. 6, 2020, in Tuscaloosa, Alabama.  (Adam Fowler via AP)

Tornado and flood watches stretched from Mississippi and the Florida Panhandle eastward to Virginia. Many school districts cited the flooding and severe weather in canceling classes.

The airport in Charlotte, N.C. evacuated a control tower and advised people to shelter in place because of a tornado warning, which the NWS said was in effect until noon on Thursday. Charlotte-Douglas International Airport said in a tweet that the Federal Aviation Administration evacuated the tower for about an hour until the storm passed.

Ominous clouds hang over downtown. Charlotte, North Carolina, on Thursday, Feb. 6, 2020. The city and surrounding areas were under the threat of severe weather during the morning and into the afternoon as a powerful storm rumbled through the Deep South. (AP Photo/Skip Foreman)

The NWS said there were reports of extensive damage from a possible tornado touchdown in Spartanburg, S.C. Video from the city showed high winds blowing through the area.

The city of Kannapolis said that a tornado touched down near Interstate 85, but only minor property damage was reported.

Klotz said Thursday that while the South sees the threat of severe weather, areas with colder temperatures are seeing "big winter" snow.

Winter storm watches and warnings stretch from Missouri through to New England. Forecasters said while a few inches were expected on the coast of Maine, up to 16 inches could fall in the New Hampshire mountains before sunny skies over the weekend.

The storm system on Wednesday dropped snow along the Mexican border in El Paso, Texas, and freezing temperatures were expected to preserve accumulations from the Red River Valley of Texas through Oklahoma, prompting school systems to remain closed Thursday in those areas.

Snow obscures writing on the side of the mountains above Ciudad Juarez, Mexico, as seen from El Paso, Texas, on Wednesday, Feb. 5, 2020. (AP Photo/Cedar Attanasio)

Snowfall was heavier to the east, where several tractor-trailers and passenger vehicles collided on a bridge over the Missouri River near Rocheport. Missouri State Highway Patrol Sgt. Scott White told The Associated Press at least one person was taken from the scene in an ambulance.

The Missouri Department of Transportation warned in a tweet that road conditions are worsening as the snowfall picks up. The tweet said, “If you can avoid it, DO NOT TRAVEL in this storm today!”