Rolando Reyes, the grandfather of the now-deceased Texas mass shooting suspect Salvador Romas, spoke to reporters as he left his Uvalde home on Wednesday afternoon.

UVALDE, Texas - Rolando Reyes, the grandfather of Texas school shooting suspect Salvador Ramos, told reporters on Wednesday that he feels for the victims of Tuesday's mass shooting at Robb Elementary School that left at least 19 students and two teachers dead.

"I feel for the victims and the families," Reyes told reporters as he got in his vehicle Wednesday, adding that he's "not happy about" his now-deceased grandson's alleged actions on Tuesday.

"I'm not going to say nothing anymore, OK?" he says when asked if he could share any kind of message with Ramos.

The 18-year-old suspected shooter had been living with his grandparents in Uvalde, where he attended a local high school, according to authorities. Multiple FBI agents walked in and out of Ramos' grandparent's home on Wednesday afternoon.

Later on Wednesday, Reyes implied that he did not know Ramos had guns in their house. 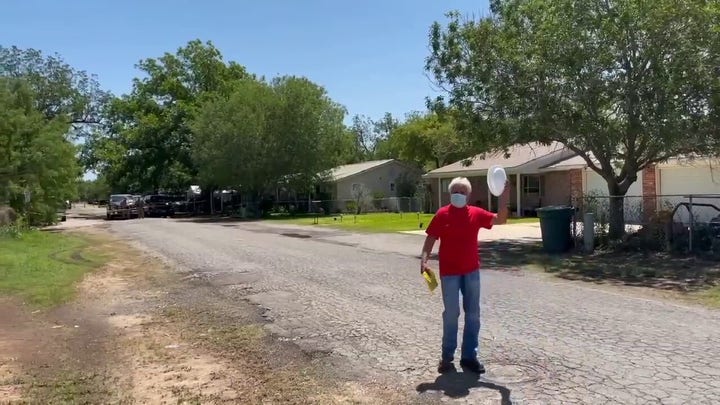 Uvalde Mayor Don McLaughlin told Fox News that during the shooting, Ramos became barricaded inside the elementary school. An agent with the Border Patrol Tactical Unit (BORTAC), is believed to have shot and killed the suspected gunman. Two officers were shot and wounded on scene but were expected to survive.

"I shot my grandmother," he posted few minutes later.

"I'm going to shoot an elementary shool," the third post read, according to Abbott.

He also allegedly posted disturbing images online before the shooting, and apparently messaged a woman about his plans before he carried out the deadly attack.

Tuesday's shooting marked the deadliest shooting at an elementary school since Sandy Hook in 2012, where then 20-year-old Adam Lanza shot and killed 26 people at the Newtown, Connecticut school. 20 of the victims were children aged 6 and 7.  It also occurred 10 days after a mass shooting at a Tops supermarket in Buffalo, New York, claimed 10 lives.