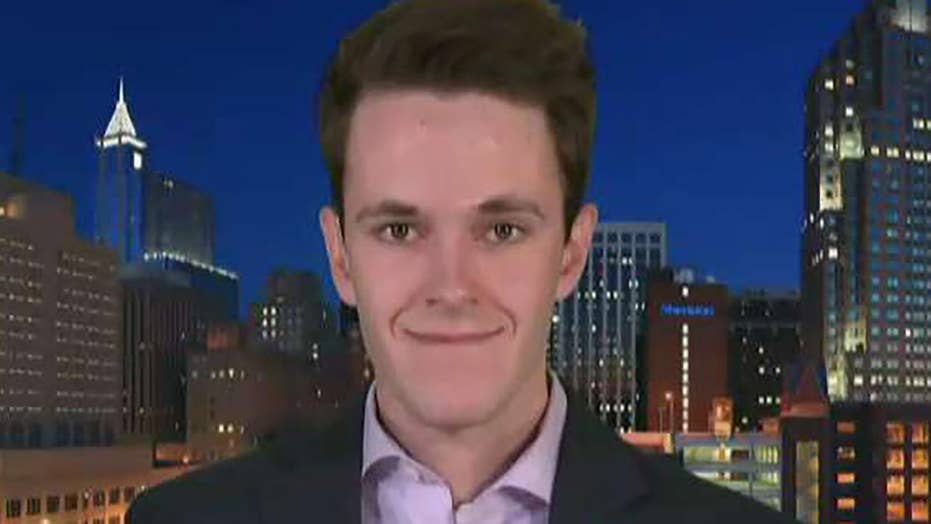 A Republican congressman's son says he was spray-painted in the face by a group of socialists on a university campus in North Carolina.

N.C. State student Jack Bishop, the son of Rep. Dan Bishop, R-N.C., told "Fox & Friends First" he was assaulted by socialist “thugs” Monday night while he was hanging flyers for a Turning Point USA event with Lara Trump and Charlie Kirk in the Free Expression Tunnel.

"We had about 24 people from YDSA, the Young Democratic Socialists of America, roll up unprovoked, uninvited with more spray paint than you can find in a Walmart, frankly, and they began to paint over everything we had just done," Bishop said. "One of their members completely ruined a piece of property of mine and another member sprayed me in the eye. Another gentleman actually battered about two or three women who actually had the audacity to stand in the way of them as they tried to tear down our flyers."

Jack Bishop, North Carolina State University student and member of the Turning Point USA chapter on campus, was assaulted Monday night by a member of the Young Democratic Socialists of America while he was advertising for the TPUSA event. ("Fox & Friends First")

He added: "It was just very concerning for the state of the campus and of free speech."

Bishop's father, who recently won a special election crediting President Trump, said he was "proud of Jack" for not giving in to intimidation, as he called the incident a "hallmark of the left today, unfortunately, this tendency to want to intimidate, to want to tear down opposing speech as opposed to offer speech in competition."

Rep. Dan Bishop, R-N.C., says he is proud of his son, Jack, for not being intimidated after a group of socialists on campus confronted him, spray painting his face and destroying property. ("Fox & Friends First")

Prior to the event, NC State spokesman Mick Kulikowski said it would go on.

"University policy permits student groups to invite speakers to campus," Kulikowski said. "NC State cannot take away that right ... and will act reasonably to ensure that the event proceeds free from disruption or violence."

"It was a fun experience and I'm glad that it happened," Bishop said of the TPUSA event on campus, adding that "nothing escalated" further than protesters shouting and disrupting the speeches.

TPUSA organizers said they "expect much more from our 'tolerant' counterparts on the left" in a statement before Wednesday night.