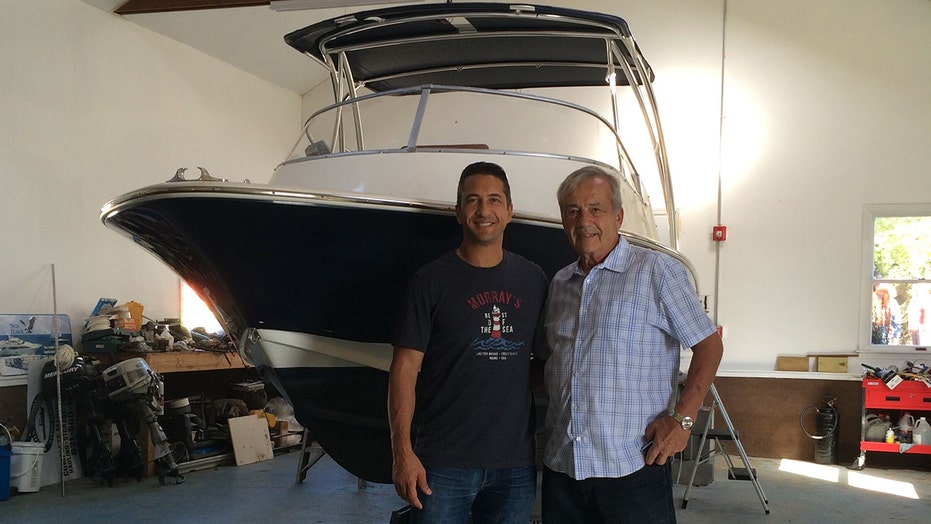 Captain Kyle Rosenblatt was fishing 20 miles off the coast of Florida when he spotted a great white shark circling his boat.

A 22-foot powerboat took his dad more than 1,000 miles from New York to Florida two decades ago, and it was time to try again, Rob Conzo thought.

And that’s exactly what the 52-year-old financial adviser from Islip Terrace, N.Y., did.

But even with modern upgrades like cellphone chargers, a new custom radar tower and a GPS unit, the journey was rough, Conzo told Fox News.

Rob and Nick Conzo in front of the Spudzy II after its post-Superstorm Sandy restoration. (Courtesy: Rob Conzo)

“We had very, very hard weather,” he said, giving his first interview about the 2018 adventure -- completed almost 21 years to the day after his father's in 1997. “Dad’s trip was smooth.”

Conzo covered about 1,650 miles, 250 of them on the Atlantic Ocean, with close friends Andy Turano and Bill Franey. It took two weeks aboard the Spudzy II, a modified 1972 HiLiner.

Rough surf pounded the hull and winds whipped them in the face, and they almost gave up at least four times.

From left to right: Rob Conzo, Bill Franey and Andrew Turano at a stop in Georgetown along the way. (Courtesy: Rob Conzo)

He said they also got trapped in a major squall off the coast of North Carolina, with 8-foot chop, overwhelming winds and heavy rain that knocked out their radio, cracked the radar tower and deck, and destroyed a brand-new Garmin GPS unit.

"The Coast Guard said we were on our own," Conzo said. “We had to tie ourselves together, hold our ditch bag, almost out of gas, almost capsized multiple times. Four hours of hell.”

But the Spudzy II, though small, has a deep-V hull that made it sturdy under rough conditions, according to Nick Gregorio, whose Stony Brook Marine Service rebuilt the boat after Superstorm Sandy nearly destroyed it in 2012.

When Superstorm Sandy tore through Long Island in 2012, it knocked the Spudzy II off its cinderblocks at a boatyard, causing damage that took years to repair. (Courtesy: Rob Conzo)

Conzo and his friends went ashore in North Carolina for repairs after the storm. They also broke a propeller in shallow, muddy water in the Intracoastal Waterway and got pummeled in more rough seas off the coast of Georgia.

But at every marina, Conzo said they encountered kind locals.

A machinist fixed their propeller for free, he said. A West Marine store let him exchange the broken GPS for a brand-new one. And a marine service that specialized in far larger watercraft "took pity" and helped fix up the Spudzy II after the storm.

“We were continually meeting people that would help us, give us places to stay, tell us where to go,” Conzo said. “These were unique people that you don’t find everywhere in life. They’re just good people. So, we encountered a lot of those people along the way.”

Conzo and Turano perform some work on the Spudzy II during their trip. (Courtesy: Rob Conzo)

In South Carolina, Conzo said he’d lost an envelope holding an emergency stash of $2,000 in cash. At the marina, they asked if anyone had seen it.

A boy had picked it up near the gas dock, turned it in to the office, and not a dollar was missing. “The woman handed it back to me and said, ‘In South Carolina, we’re honest people,’” Conzo said. “I will never forget it.”

The family’s boating legacy began sometime in the late 1960s or early 1970s when Al Sirico, Conzo’s grandfather, dumped a 15-foot Sears boat in the front yard, along with a broken trailer and a 40-horsepower Elgin outboard.

Conzo’s father, Nick Conzo, was not amused, his son said, and he swore not to touch the boat. But a year later, he cleaned it up, got it running and took a quick ride to Fire Island, on the other side of Long Island’s Great South Bay.

It changed his father’s life. From then on, he treated the boat like a person, Conzo said.

The elder Conzo named that first boat the Spudzy I, the childhood nickname of the father-in-law who dropped it on his doorstep.

The boat underwent a custom modernization and overhaul before Rob Conzo's voyage from New York to Florida. (Courtesy: Rob Conzo)

Nick Conzo eventually found what would later become the Spudzy II at a salvage yard.

It needed work, but he had a position at a vocational school, and Spudzy II’s initial restoration came in part as a hands-on lesson for students there, Rob Conzo said.

Over time, Nick Conzo and two close friends took the Spudzy II on longer trips. They went around Long Island, 118 miles from east to west. Then they went to Block Island, off Rhode Island. Eventually, they went to Martha’s Vineyard in Massachusetts.

On the final big trip down to Florida, they stopped in Baltimore Harbor and paid to have their names engraved on a brick.

Twenty-one years after his father's trip, Rob Conzo followed in his wake and found the brick in honor of his dad's crew in Baltimore Harbor. (Courtesy: Rob Conzo)

“The boat just kept going,” the younger Conzo said. “They had problems. The outdrive was making a weird noise, but it kept going.”

Thirteen days after leaving Islip, N.Y., they cruised into Halifax Harbor Marina in Daytona Beach, Fla., and gave Al “Spudzy” Sirico, who by then lived nearby, a call.

“They got to a place and called him up, and they were like, ‘Guess where we are?’” Conzo recounted. “He was shocked.”

More than 20 years later, Conzo wanted to go a little bit farther to the Bahamas, but ultimately settled on Miami due to the weather, he said.

The Spudzy II at a dock on the north shore of Long Island. (Michael Ruiz/Fox News)

“It’s just a beautiful commemoration to a life of family boating,” Conzo said. “And accomplishing things twice that most people -- I never heard of a person with a 22-foot boat going down to Florida.”

Except, of course, his dad. And himself. And their friends.

Who’s next? Conzo said his 11-year-old daughter, Isabella, will own the Spudzy II someday.