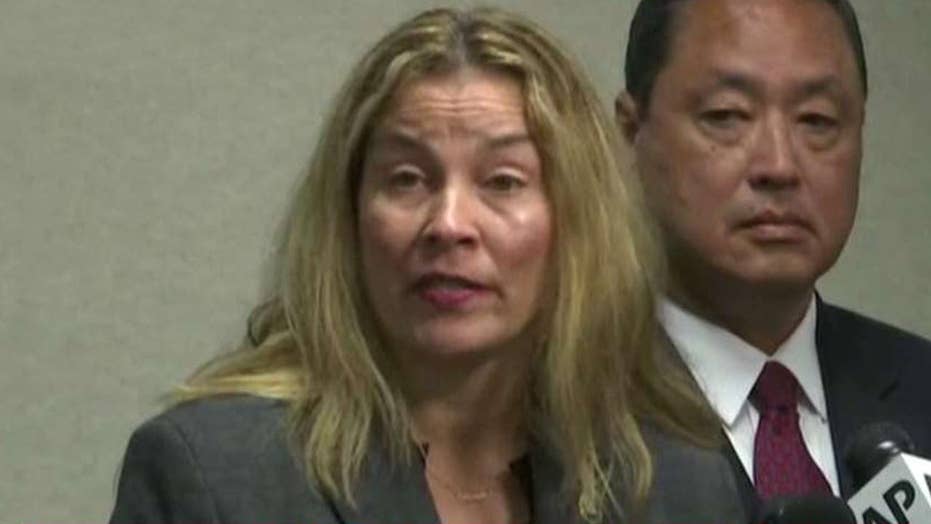 FBI on Pensacola Naval Air Station shooting: There was one gunman involved in this attack

Investigators looking into the deadly attack at a U.S. naval base in Florida said Sunday they're working under the presumption it was an act of terrorism involving a lone gunman, and that no arrests have been made in connection to the incident -- as officials revealed that a Saudi student recorded at least part of the attack on video.

In remarks delivered at a news conference, FBI Special Agent-In-Charge Rachel Rojas said all international students at that base have been accounted for and that all the Saudi students close to the shooter were continuing to cooperate in the investigation.

"We are, as we do in most active-shooter investigations, work with the presumption that this was an act of terrorism," Rojas told reporters.

Federal officials were asked about reports that gunman Mohammed Alshamrani, 21, hosted a dinner party earlier in the week where he and three others watched videos of mass shootings. The official who spoke Saturday to The Associated Press said one of the three students who attended the dinner party hosted by the attacker recorded video outside the classroom building while the shooting was taking place on Friday. Two other Saudi students watched from a car, the official said.

Rojas declined to comment on those reports. In an exclusive interview on "Fox News Sunday," Defense Secretary Mark Esper said it's unclear if they were filming it before it began or if it was something where they picked up their phones filmed it when they saw it unfolding.

"You know, today, people pull out their phones and film everything and anything that happens," Esper told Fox News' Chris Wallace.

Alshamrani, a 2nd Lt. in the Royal Saudi Air Force and student naval flight officer of Naval Aviation Schools Command, opened fire at Naval Air Station Pensacola in Florida before being shot dead. Alshamrani killed three people Friday and wounded eight others, who are all expected to recover.

A U.S. official who spoke on condition of anonymity after being briefed by federal authorities previously told The Associated Press that a total of 10 Saudi students were being held on the base as of Saturday while several others were unaccounted for. On Sunday, Rojas said that several students that were close to Alshamrani were cooperating and conducting interviews with investigators and that a Saudi commanding officer has ordered all students from the country to remain at one location at the base.

"This is a large investigation," Rojas said. "We have not yet completed every interview. We will continue to set up many more interviews over the next couple of days."

In regards to earlier reports that the FBI was searching for, or unable to find, certain individuals, Rojas said that the FBI is working "side by side" with the U.S. Navy.

"They have confirmed to us that they have 100 percent accountability of all international students from NAS Pensacola," she told reporters.

Rojas also disclosed that Alshamrani had legally purchased a Glock 9-mm. handgun that was used in the attack, but did not go into specifics, citing the ongoing investigation. Investigators have currently assessed that there was a lone gunman behind the attack and are "working tirelessly" to figure out any ideology that may have been an influence in shooting or if the 21-year-old was working with a larger network, according to Rojas.

“I can tell you that we are looking very hard at uncovering his motive and I would ask for patience so we can get this right,” she said.

In the weeks leading up to the shooting, Alshamrani and the same three other Saudi military trainees made a visit to New York City, where they went to several museums and Rockefeller Center, a person briefed on the investigation told the New York Times and The Associated Press.

Federal investigators are now focused on whether the trip was an extended tourist trip during the Thanksgiving holiday week or if the group of Saudi trainees had other motives or were meeting with anyone else in New York, according to The Times. Saudi officials told the Wall Street Journal on Sunday that authorities are investigating if the 21-year-old was radicalized during a trip back to the kingdom that began late last year.

Officials are working to determine if Mohammed Alshamrani, 21, of the Royal Saudi Air Force, acted alone in the shooting. (AP Photo/Melissa Nelson)

"Our investigation has not led us to any information to indicate that there is any credible threat to our community, however, as always, we urge you to keep an eye out for each other especially for a tragedy like this one," Rojas said. "If you see something, please say something. If you saw something, anything, please provide that information about the shooter that you think that might be relevant in this case. There is absolutely nothing too small."

In the wake of the deadly shooting, President Trump said Saturday that he would review policies governing foreign military training in the U.S but declined to say whether the shooting was terrorism-related.

Sen. Rick Scott discusses heroism in the Naval Air Base shooting on ‘Fox and Friends’.

The U.S. has long had a robust training program for Saudis, providing assistance in the U.S. and in the kingdom. Currently, more than 850 Saudis are in the United States for various training activities. They are among more than 5,000 foreign students from 153 countries in the U.S. going through military training.

“This has been done for many decades,” Trump said. “I guess we're going to have to look into the whole procedure. We'll start that immediately."

"We have got to make sure that American sailors, American soldiers are safe. We have to have a full review of what happened here," he said on "Fox & Friends." "We cannot be taking risks for our sailors."

The FBI's Jacksonville office has said it's not aware of any credible threat toward the Pensacola community at this time, but anyone with information regarding Alshamrani and his activities before the shooting is encouraged to call 1-800-CALL-FBI.