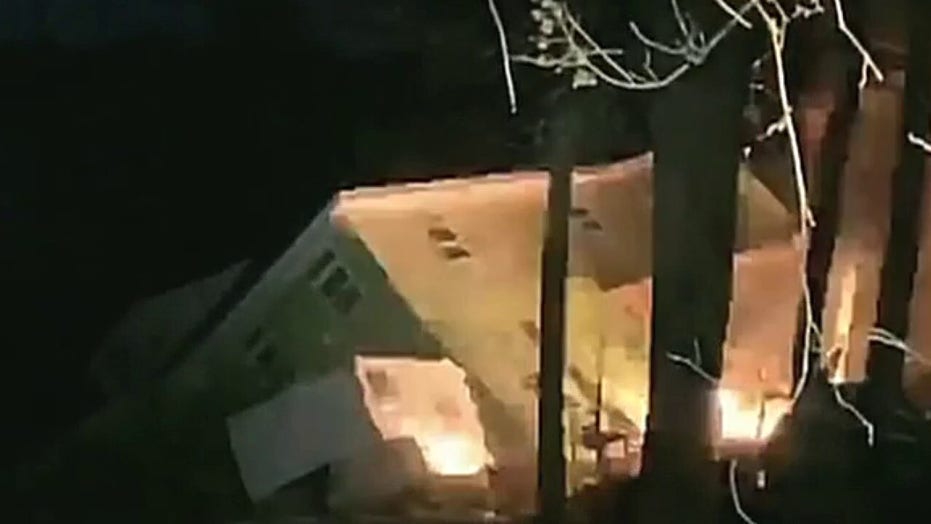 Homes plunge into river in Tennessee amid historic flooding

Major flooding sends two homes plunging into a river in Tennessee and prompts evacuations in Mississippi.

A landslide sent two large homes plummeting into the rain-swollen Tennessee River over the weekend, video posted on Facebook by a local fire department showed, but fortunately, nobody was reported hurt.

One of the homes in Savannah, Tenn., a two-hour drive east of Memphis, made cracking and snapping sounds and showed sparks of electricity as it slid into the river.

Only one of the two homes was occupied when the threat of a landslide became imminent -- and rescuers said the homeowners evacuated ahead of time.

TENNESSEE MAYOR ACCUSED OF STEALING OVER $300G FROM HIS GRANDMOTHER, HER ESTATE

Within an hour of the evacuation, the first of the two homes collapsed Saturday night, Fox 13 reported.

“Oh my God,” someone was heard saying in the background.

Drone photos shared by the department showed a large section of the riverfront known as Chalk Bluff had dropped off into the water, leaving a mess of debris. Contents of the homes were spread up and down the hillside.

The names of the homeowners had not been released Sunday, reports said.

The collapse came as the fire department reported the river was at flood stage, following days of heavy rain across much of the southeastern U.S.

The rain has been blamed for multiple landslides involving rocks and mud over the past week across North Carolina, West Virginia and Tennessee, McClatchy reported.