Memphis shooting: Surveillance footage of Ezekiel Kelly allegedly running in and out of an AutoZone store

At the top left of the screen, suspected gunman Ezekiel Kelly can allegedly be seen pulling up and running in and out of the AutoZone store, where police say he shot and critical wounded an innocent man.

He allegedly shot two people and almost hit a third.

Kelly ultimately took a plea deal, admitting only to a felony aggravated assault charge, and was sentenced to three years in prison. However, he served only 11 months and walked free in March.

Court documents obtained by Fox News Digital reveal he was initially indicted for attempted first-degree murder in the shooting of Lamarcus Grandberry, a gang-related assault of Edward Rogers, involving a firearm, and the reckless endangerment of Rutrundra Gaston, allegedly putting the latter "in imminent danger of death or serious bodily injury."

The assault was later upgraded to another count of attempted first-degree murder, court records show.

But Kelly ultimately took a pleaded guilty to the reduced charge of aggravated assault.

He was released in March and, according to his aunt, worked as an aide in a home for the elderly before Wednesday's chaos.

The first victim Wednesday was identified by Memphis police as Dewayne Tunstall, whom neighbors said was a childhood friend of the suspect.

Kelly allegedly asked Tunstall to speak with him in private in a mutual friend’s driveway around 1 AM Wednesday morning.

Bloodstains are still visible on the driveway where Ezekiel Kelly is alleged to have shot and killed Dewayne Tunstall hours before police accuse him of going on a rampage that killed another three people and injured three more. (Matt Symons for Fox News Digital)

After pulling Tunstall aside, Kelly allegedly opened fire in the middle of their conversation, striking him at least once in the head, according to a police affidavit.

Photos taken by Fox News Digital show bullet holes in the side of the house and a bloodstain on the asphalt.

At least one shot went through what appears to be a child’s bedroom window, with toys on the sill.

A bullet hole in the window is visible here at the home where Ezikiel Kelly is alleged to have shot, Dewayne Tunstall last night in Memphis, Tennessee. Photo taken, September 8, 2022.  (Matt Symons for Fox News Digital)

Kelly's rampage then picked up several hours later, with another six people shot, three of them fatally, and two alleged carjackings. The chaos came to a close around 9 p.m., after Kelly allegedly crashed a stolen car at the intersection of Ivan and Hodge Roads. Police arrested him at the scene. He smiled in his mugshot.

Kelly allegedly live-streamed portions of the attacks on Facebook, including the shooting of an unsuspecting shopper at an AutoZone store on Jackson Ave.

In 2020, he was represented by the high-priced Memphis lawyer Juni Ganguli. Judge Karen Massey asked him if he could afford an attorney at his arraignment Friday morning, and he said no, so she appointed a public defender.

Ganguli did not immediately respond to a request for comment. The public defender, Jennifer Case, told the judge she intended to move for a gag order  on the case. 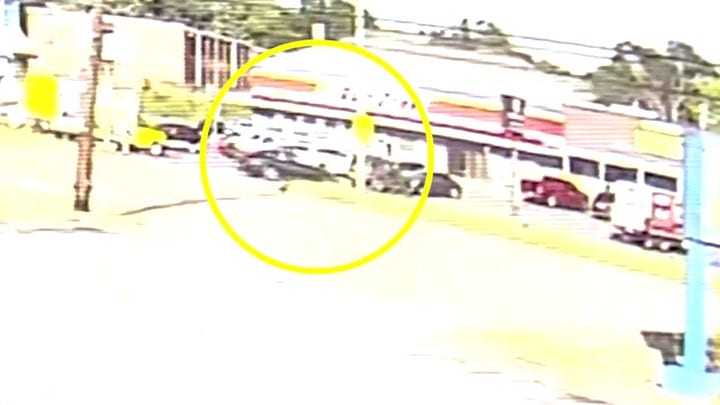 Kelly did not enter a plea and no bond was set during the hearing. Shelby County District Attorney General Steve Mulroy said additional charges against the defendant were likely to come.

Mulroy acknowledged that the public was "concerned" and said the defendant would be held without bail due to the nature of the alleged crimes.

Shelby County District Attorney, Steve Mulroy addresses the media after Ezekiel Kelly's appearance in Shelby County court in Memphis, Tennessee on September 9, 2022. Kelly is alleged to have killed four people and injured more as he drove around Memphis firing at will and carjacking numerous people too. (Matt Symons for Fox News Digital)

"They're concerned about a horrible week we've had here in Memphis," the newly elected top prosecutor said. "We understand how the public feels, and we want to reassure the public that we and law enforcement are working around the clock on these cases to prevent things like this from happening in the future."

He added that public safety is his and law enforcements' "absolute number one priority."

"I've said this before, and I think it bears repetition. This office takes repeat violent offenders very seriously," he told reporters. "It merits a strong response."