The city has been gripped by violence after police officers shot and killed a 27-year-old Black man a day earlier who they said refused to drop his knife as he “advanced towards” them. The man was identified as Walter Wallace Jr. and a part of the incident was caught on video.

Police and city officials issued swift statements following the incident and promised an investigation. But their assurances did little to assuage many in the city who see the shooting as another example of a Black man being killed by police when they say the situation could have been diffused.

Protesters, including two carrying part of a barricade, walk during a demonstration Tuesday night, Oct. 27, 2020, in Philadelphia. (AP Photo/Michael Perez)

Journalists covering some of the lootings described chaotic scenes they said appeared to be void of any police coverage. Police took to Twitter late Tuesday to announce there were about 1,000 looters in the area of Castor and Aramingo streets alone.

Videos showed stores with items strewn in aisles and looters carrying out kitchen appliances and other items. Many stores were boarded up, but crowds still managed to break through windows.

Elijah Schaffer, a reporter for the Blaze who was covering the looting at a store called Five Below, was reportedly seen on video getting pummeled inside a store by a group of protesters. Schaffer, who had a swollen and bloody lip, said he was jumped by Black Lives Matter protesters inside the establishment.

“I’m going to go to the hospital, I think, to get stitches because it is just absolutely painful,” he said in a video posted on Twitter. “But this is what’s happening in the current state over the killing of Walter Wallace.”

The Philadelphia Office of Emergency Management asked residents from certain neighborhoods to remain indoors due to the “widespread demonstrations that have turned violent with looting.”

Videos posted to social media showed people running out of a Walmart with clothes, electronics and other merchandise. Some showed stores in disarray as looters grabbed various items from shelves and left. One person was seen hauling away what appeared to be a washing machine.

The White House issued a statement early Wednesday that called the riots in the city the “most recent consequence of the Liberal Democrats’ war against the police.”

The statement called for a full investigation into the shooting, but said “we can never allow mob rule. The Trump administration stands proudly with law enforcement, and stands ready, upon request, to deploy all Federal resources to end these riots.”

Democratic nominee Joe Biden and his running mate, Sen. Kamala D. Harris, D-Callif, issued a statement on Tuesday afternoon, “We cannot accept that in this country a mental health crisis ends in death,” the statement read, the Washington Post reported. They also condemned the riots on Monday night as a “crime” not a “protest.”

The city’s police union defended the officers in a statement and said they are being unfairly vilified for “doing their job and keeping the community safe, after being confronted by a man with a knife.” 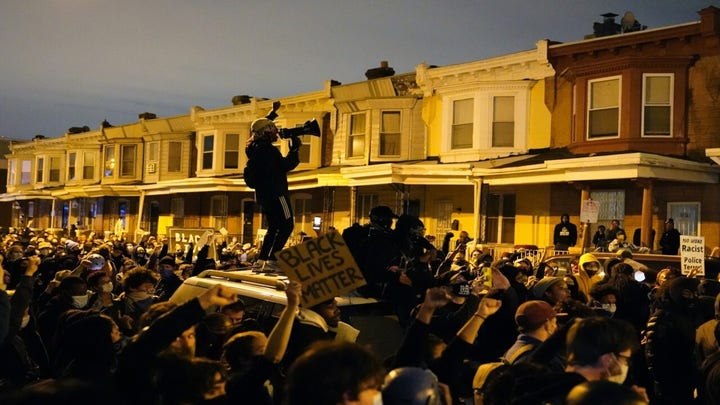 The Philadelphia Inquirer reported that the evening began peacefully and there was a march to a local precinct. The paper said officers were prepared with riot shields and were pelted with debris.

Three of Wallace's sons remembered their father during an earlier news conference surrounded by family and community members.

"We always go places," said one child, whose name was not revealed. "He always teach [sic] me how to be a man. And these White racist cops got my own dad. And Black Lives still matter."

Officers had responded to Wallace's home twice before earlier in the day. A third call was meant for an ambulance, a family attorney said Tuesday.

"I was telling the police to stop 'Don't shoot my son,'" Wallace's mother told reporters. "They paid me no mind."