The Black man fatally shot by Philadelphia police officers on Monday was an aspiring rapper who sometimes rhymed about shooting people, including police officers, and was awaiting trial for allegedly threatening to shoot a woman, according to media reports.

Court records obtained by the news outlet also show Wallace had a criminal history. In 2017, he pleaded guilty to robbery, assault and possessing an instrument of crime, according to documents obtained by Fox News.

Authorities said he kicked down the door of another woman and put a gun to her head. 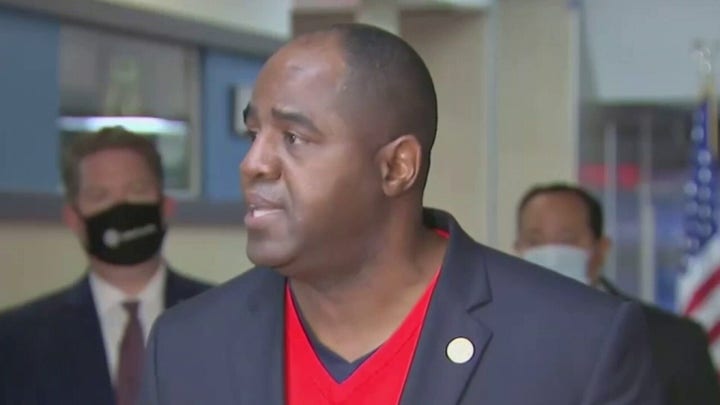 He was sentenced to 11 months to 23 months in jail. In 2013, he pleaded guilty to resisting arrest and punching an officer in the face. It was not clear if the two officers who shot Wallace knew him, his mental health struggles or his past, Police Commissioner Danielle Outlaw said Tuesday.

"There are several questions that need to be answered... including what the officers knew when they responded, what was put out by radio and how any previous contact with Mr. Wallace factored into yesterday," she said during a virtual news conference.

Authorities said Wallace was armed with a knife and ignored commands to drop it when he was shot Monday afternoon. The two officers fired at least seven rounds apiece. It was not clear how many times Wallace was hit.

Neither officer had a Taser.

A relative previously told Fox News that Wallace had struggled with mental health issues and was bipolar. He was previously ordered by a judge to undergo psychiatric evaluation treatment, the news station reported.

Officers had been to Wallace's home twice before on the day he was killed for domestic disturbances, the Philadelphia Inquirer reported. The family told the newspaper the third call was for an ambulance to help him deal with his mental health crisis, not for police, Wallace family attorney Shaka Johnson told reporters.

Calls and messages to Johnson were not immediately returned.

“They were advised that he had mental health issues,” Anthony Fitzhugh, Wallace's cousin, told the Inquirer. “I understand he had a knife, and their job is to protect and serve,” Fitzhugh said. “By all means do so, but do not let lethal force be the means by which you de-escalate the situation. You could have still kept your gun drawn while another officer tased him.

People clean up debris Tuesday after a protest in Philadelphia over the death of Walter Wallace, a Black man who was killed by police in Philadelphia. (AP Photo/Michael Perez)

The names of the two officers involved in the shooting have not been released, Outlaw said Tuesday. That information will be made public when the department determines it won't jeopardize their safety.

Wallace's death prompted violent protests Monday night in which dozens were arrested and 30 police officers were injured. The Pennsylvania National Guard was mobilized Tuesday in anticipation of a second night of unrest.

Outlaw theorized that some of the demonstrators were not from the west Philadelphia neighborhood where Wallace was killed.

"Speaking anecdotally - we tend not to like to speak anecdotally - but I will tell you the crowd that was out there on the scene, the residents from that neighborhood those, who witnessed the incident, those were the folks that I interacted with while there," she said. Those were not the same people that we later interacted with once I left that scene."