Learn about 6 of the biggest fentanyl busts in the U.S., whose combined doses are deadly enough to kill 229 Americans.

A drug bust last year was hailed as the largest fentanyl bust in U.S. history—254 pounds seized at an Arizona border crossing.

The seizure came as the scourge of fentanyl continues to fuel the opioid epidemic, ravaging communities across the U.S. while killing tens of thousands of people.

"Fentanyl also continues to be a tremendous problem, contributing to 68,000 overdose deaths in the United States in 2018," Mark Morgan, acting commissioner of U.S. Customs and Border Protection told Congress in November. He said CBP's seizures of fentanyl rose by 30 percent in fiscal year 2019, totaling 2,770 pounds.

Fentanyl comes from China. Often it is smuggled into the U.S. from Mexico by drug cartels involved in a violent war with Mexican police and military forces.

The historic 254-pound bust was just one of a half-dozen big fentanyl busts recorded by law enforcement in recent years, a tally shows.

These six busts have led to the seizure of some 818 pounds of fentanyl--enough to kill 229 million people, according to authorities.

A Border Patrol K-9 at the Nogales border crossing sniffed narcotics when an 18-wheeler transporting cucumbers from Mexico came through for inspection on Jan. 31, 2019.

Photo from news conference announcing the seizure of 254 pounds of fentanyl at the Port of Nogales border crossing in Arizona. (U.S. Customs and Border Patrol)

It was the largest fentanyl seizure ever at a U.S. border crossing.

MISSOURI FENTANYL DEALER LEFT CLIENT DYING OF OVERDOSE IN CASINO BEFORE ODING IN ANOTHER: PROSECUTORS

“This past weekend our CBP officers were able to stop an enormous amount of these deadly narcotics from hitting our streets,” Nogales Area Port Director Michael Humphries said.

The truck was also carrying 395 pounds of methamphetamine.

He has since pleaded guilty.

At the time, it was the nation’s largest seizure of pure fentanyl, officials said.

Another 48 pounds of fentanyl mixed with heroin was also seized.

A Nebraska State Trooper found 118 pounds of fentanyl in a hidden compartment in a tractor-trailer he stopped on I-80. (Nebraska State Patrol)

A Nebraska State Trooper stopped a tractor-trailer on I-80 on April 26, 2018, and, after conducting a search, seized 118 pounds of fentanyl worth $20 million, enough to kill 26 million people.

The seized opioid was hidden in a false compartment of the vehicle.

The trucks two occupants Felipe Genao-Minaya, 46, and Nelson Nunez, 52, both of Newark, N.J., were arrested on drug trafficking charges.

The trooper who pulled over the truck described Geano-Minaya as “nervous and shaking visibly in the truck” as he questioned him.

Charges against the two men are still pending.

The fentanyl was found in a shipment of iron oxide from China.

Photo shows fentanyl found in barrels of iron oxide during an inspection by Customs agents at the Port of Philadelphia (U.S. Customs and Border Patrol)

"Opioids, including fentanyl and its analogues, are a serious public health concern, and the importation of vast amounts of this deadly synthetic chemical compound is a national security threat,” Casey Durst, CBP Director of Field Operations in Baltimore said after the seizure.

Detectives swooped in as the fentanyl was being transferred from a tractor-trailer to the trunk of Mercedes-Benz.

The bust led to another seizure the next day of 11 more pounds of fentanyl at a home in Willingboro.

The fentanyl was enough to kill 18 million people, investigators said.

The seizure of the 99 pounds drove home “the scope of the problem we face in New Jersey with this highly lethal opioid,” Director Elie Honig of the Division of Criminal Justice said.

After stopping a rented vehicle in San Diego County on Nov. 30, 2016, DEA agents seized 33 pounds in the trunk. 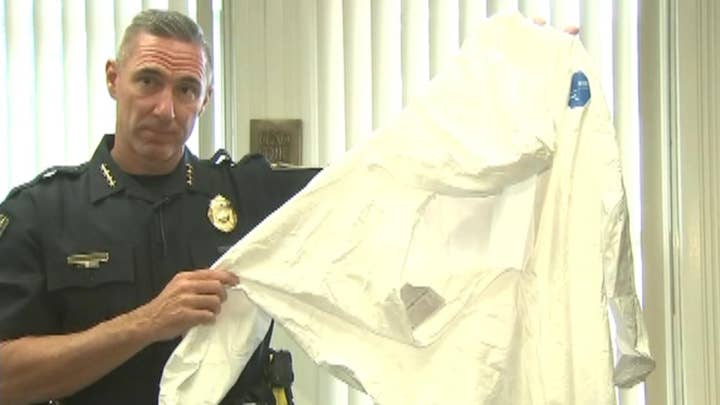 After arresting Anna Baker, the agents obtained a search warrant to search her home and seized another 64 pounds of fentanyl.

The 97 pounds of fentanyl was enough to kill 14 million people.

All three pleaded guilty and sentenced to prison.

Baker, the daughter of a former mayor of Lemon Grove in Southern California, was sentenced to four years in prison two years ago.

"I made a terrible, huge mistake," Baker said, the San Diego Union-Tribune reported. "I'm very ashamed about what I did."