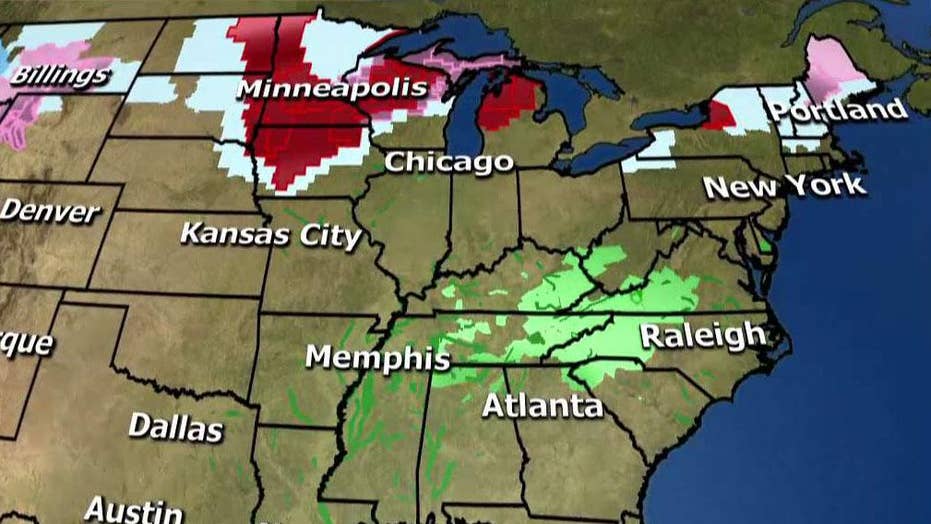 At least one person was killed and several were injured after a tornado ripped through a small Mississippi city on Saturday, as severe storms slammed the region with drenching rains and the threat of flooding.

The tornado leveled the commercial district of Columbus, Miss. and left the town scattered with debris, including downed power poles and damaged homes. The mayor's office in Columbus said in a Facebook post that Ashley Glynell Pounds, 41, of Tupelo was killed when the storm rolled through.

The statement, which cited information from Lowndes County Coroner Greg Merchant, said that Pounds died when she was with three other people in a building that collapsed. The 41-year-old was taken to the hospital where she died in surgery.

A large tree is down into one of several buildings housing antique cars at Lawrence Motors on Highway 50 in Columbus, Miss., after a tornado struck the area Saturday, Feb. 23, 2019. (AP Photo/Jim Lytle)

The Mississippi Emergency Management Agency said on Twitter it responded to the scene and is assisting with initial damage assessments and resource coordination in response to the tornado.

Several roads were also left impassable, and cars could be seen in photos covered by brick from collapsed walls and other debris.

Lee Lawrence, who said he has been selling used cars for decades in Columbus, told the Associated Press that four buildings on his car lot had been destroyed. Lawrence said he was at home getting ready to take a bath when the storm struck, toppling trees and blowing out the windows of cars.

"The wind all of a sudden just got so strong and it was raining so much you could hardly see out the door, and I could hear a roaring. Evidently it came close," he told the AP. He said someone called him soon after about the damage to his business and he rushed over.

"It will be a start-over deal," Lawrence said. "I can't say it will come back better or stronger, but we'll come back."

The tornado that shattered businesses in the east Mississippi city was confirmed on radar, meteorologist Anna Wolverton with the National Weather Service in Jackson said. She told the AP that experts would be headed Sunday to the city of about 23,000 people to gauge the tornado's intensity.

A metal pipe sticks through the exterior wall of Fast Dog Printing Co. on Conway Drive in Columbus, Miss., after a tornado struck the area Saturday, Feb. 23, 2019. (AP Photo/Jim Lytle)

Another tornado was reported in Burnsville, Miss., but additional details about possible damage were not immediately known.

Elsewhere around the South, homes, highways, parks and bridges have been flooded or put out of commission amid the heavy rains and severe storms.

Nashville broke a 139-year record on Saturday for the most rainfall in recorded history for the month of February, FOX17 reported. The continued rainfall and severe storms led to the Tennessee Emergency Management Agency declaring a State of Emergency.

Some area residents were forced from their homes due to rising floodwaters across the region.

“There’s no access to my house from here without a boat at this point. The center right now is about 5 feet deep,” Steve Didominzio of Murfreesboro, Tenn. told FOX17.

In Knox County, Tennessee, officials said a man has died after his vehicle became submerged in high water. The Sheriff's office says emergency crews got the man out of his vehicle and took him to a hospital, but he was later pronounced dead.

Interstate 40 near the Tennessee line with North Carolina was closed by a rockslide, one of the dozens of roads and highways shut down throughout the South region, transportation officials said. Officials said a mudslide destroyed a Subway restaurant in Signal Mountain, Tenn. No injuries were reported.

Weather officials said the vast storm system threatened areas from eastern Arkansas far across the South, to northern Georgia and beyond. Kentucky announced Friday that it was closing the U.S. 51 bridge over the Ohio River to Cairo, Ill., because of flooding on the southern approach. The bridge, which carries 4,700 vehicles a day, is likely to stay closed until Thursday, and possibly longer.

Workers pass by the scene of a mudslide on I-40 eastbound in Clyde, N.C., near the Tennessee and North Carolina border on Saturday, Feb. 23, 2019. (Calvin Mattheis/Knoxville News Sentinel via AP)

The Ohio River at Cairo is predicted to crest Sunday at its third-highest level ever recorded, and stay that high into next week. The Tennessee River near Savannah, Tenn., also is forecast to crest at near-record levels.