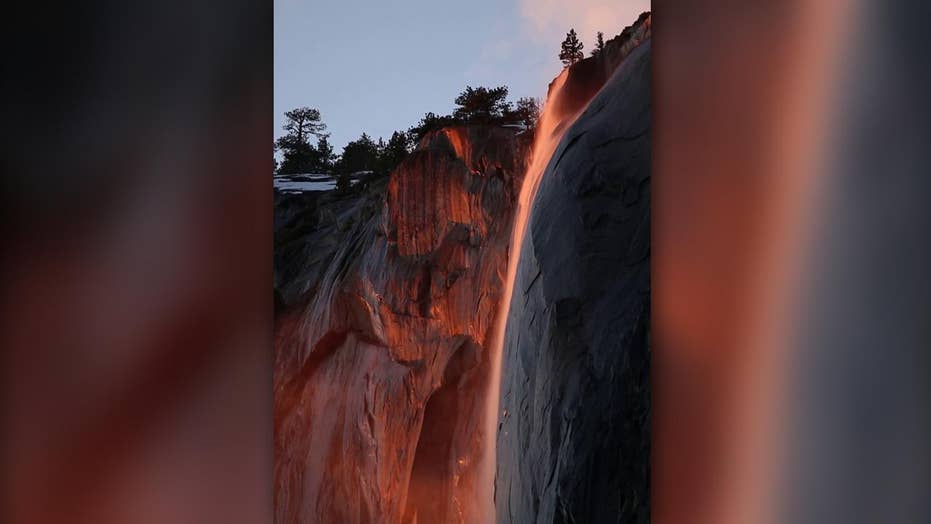 The spectacle of the setting sun that transforms a waterfall in Yosemite National Park into a glowing "firefall" returned this week -- but those looking to make the trek are being warned about current conditions after heavy snow this winter.

The "firefall" effect on Horsetail Fall in Yosemite Valley happens during the second half of February when there is a clear sky and enough snow for the waterfall to flow, according to the park.

"It's a small waterfall that many people don't notice, but it has gained popularity as word has spread of the orange glow it assumes during sunset in mid to late February," the park says on its website. "This unique lighting effect happens only on evenings with a clear sky when the waterfall is flowing."

This year, the Firefall is expected to last from Feb. 12 until Feb. 24, FOX26 reported. Friday is apparently the best day to see the spectacle, according to AccuWeather.

Recent photos posted to Instagram show what some users described as "magical sights."

But those looking to make the trek are being cautioned that, due to all the snow the region has seen this winter, the trek to see the falls may be trickier than in previous years.

Photographer Ryan Fitzsimons told the San Francisco Chronicle that he visited the park over the weekend and experienced "treacherous and unsafe" conditions.

"What would have been a 10-minute walk normally turned into a two-hour trek through waist-deep snow," he told the Chronicle. "People were falling in the river. Our clothes were soaked by the time we got to a viewing spot."

YOSEMITE NATIONAL PARK'S 'FIREFALL' MAY NOT APPEAR DUE TO DROUGHT

The spectacle has grown in popularity over the years, and park officials have had to issue permits for vehicles headed to the viewing area after major traffic jams in the area created significant safety problems. But this year, officials said there are no permit or reservations required.

Due to all of the accumulated snow, however, there are parking restrictions and vehicles may not stop on some roadways near the waterfall.

"Visitors should be prepared to walk at least a mile from their parking location to a viewpoint; remember to bring warm clothes, boots and a headlamp or flashlight," the park said on its website.