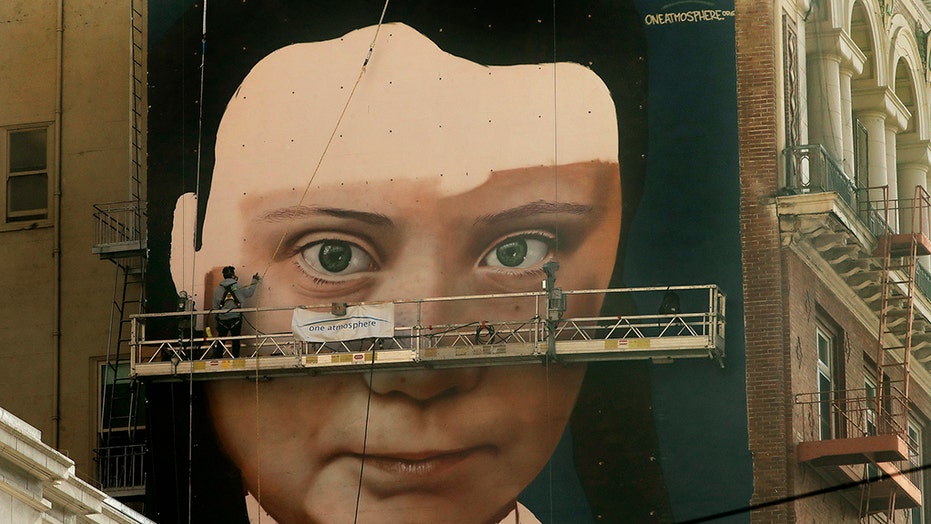 A massive mural of the face of teen climate activist Greta Thunberg in downtown San Francisco makes its debut Tuesday — even as it stirs controversy.

The artist behind the 60-foot-tall by 30-foot-wide creation is Argentine muralist Andres Iglesias, who goes by the name Cobre and is known for his “hyper-realistic” portraits. He agreed to work for free on the project, which is being sponsored by the environmental nonprofit One Atmosphere.

But Cobre was forced to go on the defensive after social media users began noting the irony of using spray paints – which they say harm the environment – to pay homage to the 16-year-old Thunberg, The Art Newspaper reported Sunday.

Cobre responded that the materials he was using were environmentally friendly, the paper reported.

“The thing is, the sprays I use are eco-friendly, and most of the paint is hand-painted with a roller,” he told the paper. “[It is] water-based so there is zero impact.”

One Atmosphere said Sunday in a post on city guide SF Station’s Instagram page that they were using spray cans that don’t contain environmentally damaging chlorofluorocarbons.

“We are using low-pressure cans with a minimal footprint,” the post said. “The cans and the boxes will also be recycled, although many of the cans will first have a second life as part of a separate art project.”

The nonprofit went on to say the cans have been picked up and delivered in an electric vehicle, and the artist and organizers have been traveling almost exclusively by way of electric car, electric scooter or on foot to the project site — the side of building on Mason Street, above the music venue August Hall.

“The lift being used is also electric, not diesel.” the post added.

When asked by The Art Newspaper if he thinks Thunberg will like the project, Cobre responded, “I think she won’t care.”

At the same time, the paper reported some budding art critics on Twitter claimed the mural looked more like Russian President Vladimir Putin.

“I can’t be the only person that thinks the mural of Greta Thunberg in San Francisco looks like Putin, right?” one person tweeted, according to the paper.

Time magazine reported that Cobre hopes the image of Thunberg will bring attention to the crisis of climate change.

He told the magazine that while most people have responded positively to the mural, some have messaged him negative comments on Instagram.

“If 95 percent [of] people are going to like it, then my job is well done,” Cobre said. “Haters gonna hate.”