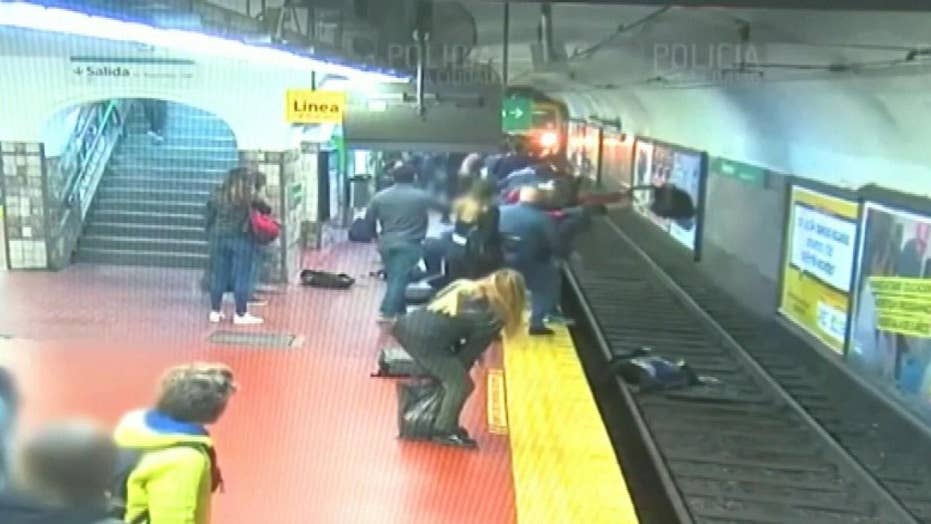 Raw video: Security camera footage shows a man fainting in the station and then inadvertently pushing a woman off the platform.

A crowd of commuters in Argentina frantically waved down an oncoming subway train after a woman was accidentally knocked onto the tracks in harrowing video footage captured last week.

The woman, identified only as Andrea, was walking on a subway platform in Buenos Aires when a man appeared to faint, falling forward and hitting her with his head. Security footage showed the woman tumble onto the tracks. She appeared to hit her head and fall unconscious.

Moments later, a train started to pull into the station. The commuters rushed up the platform, waving and signaling at the engineer to hit the brakes. The train came to a stop just feet short of where the woman lay across the tracks. Several men then jumped down to pull the woman to safety.

Train operator Roxana Elizabeth Flores, who has worked at the Metrovías for 25 years, called the rescue a “miracle” in an interview with the Telefe new channel, according to La Nacional.

"People signaled and I immediately saw the person on the tracks and applied the emergency brake, as the protocol says," she told the outlet.

RUSSIA DAM COLLAPSE AT GOLD MINE KILLS AT LEAST 15, SEVERAL UNACCOUNTED FOR

The woman’s husband, Marcelo, told La Nacional that she is lucid and able to feed herself, although still in shock from the ordeal.

"Today she asked to watch the video [of the incident] and she began to cry,” he said. “She can't believe it."

Police questioned the unidentified man who knocked Andrea onto the tracks, but later released him, La Nacional reported.

Marcelo told the paper that when he reached the platform the man had a cut on his forehead. He said they all rode together in an ambulance, where the man told him he had felt sick at work and was on his way home when he fainted.

There were no immediate updates on the condition of Andrea or the unidentified man.