Family Dollar is the last place Collier was seen alive. The 59-year-old office manager found stripped naked and burned in the woods off a rural highway earlier this month just down the road from here on Sept. 11, 2022.

ATHENS, Ga. – EXCLUSIVE: Georgia detectives on Tuesday collected an unfired round near where a K-9 discovered the nude and partially burned remains of Debbie Collier earlier this month.

Investigators told Fox News Digital it could be unrelated — the area is part of the Chattahoochee-Oconee National Forest where she was found, but there were no clear signs that Collier had been shot. However, authorities suggested it could still be a clue that leads them closer to solving Collier’s gruesome death.

Fox News Digital discovered the unfired round Tuesday about 20 to 30 yards uphill from the crime scene, in a public area, and immediately alerted investigators. Detectives from the Habersham County Sheriff's Office arrived around 15 minutes later and placed it into a small evidence bag.

"That’s an important piece of evidence, and that’s something [one or more suspects] could’ve dropped on the way out the door," Pat Diaz, a former Miami-Dade homicide detective with more than 30 years on the job, told Fox News Digital.

Debbie Collier captured on surveillance video at a Georgia Family Dollar store the day she went missing on Sept. 10, 2022. Inset: An unfired round on the trail leading to where police found her remains the following day (Habersham County Sheriff's Office; Inset: Kat Ramirez/MEGA for Fox News Digital)

He said investigators would likely be looking into the possibility that someone forced Collier downhill at gunpoint but used something else to kill her.

"It’s not a recreational hunting round that you would find normally in that area," he added. "That’s unusual. A hunter's not using a .223 round, plus…it’s bow season."

An unfired round discovered 20 to 30 yards from where police earlier this month spotted the remains of Georgia office manager Debbie Collier, who had been partially burned and stripped naked. (Kat Ramirez/MEGA for Fox News Digital)

Collier, 59, vanished on Sept. 10, according to authorities. Minutes after she was last seen alive at a Family Dollar store in Clayton, 90 minutes from her home in Athens, her daughter Amanda Bearden received a $2,385 Venmo payment and a cryptic message. It read: "They are not going to let me go love you there is a key to the house in the blue flowerpot by the door."

The following day, SiriusXM contacted the local sheriff's office to report a missing person's vehicle in the vicinity. They determined it was Collier's rented Chrysler Pacifica and after a search of the area discovered her naked body with "charring" on her abdomen and grasping at a tree at the bottom of an embankment, according to authorities.

Down the path, at the root of a burned out fallen tree, were remnants of a fire and items that Collier purchased before she went missing on Sept. 10.

Burned paper towels, melted bits of blue tarp and a small plastic buckle, possibly from her red tote bag, were scattered beneath the roots, which bore clear burn marks.

The charred root ball of a tree where investigators found evidence linked to the slaying of Debbie Collier on Sept. 11, 2022. (Kat Ramirez/MEGA for Fox News Digital)

Another branch across from the tree also had charred bark and dead leaves.

Also visible was what looked like a possible charred fragment of her Georgia Bulldogs jersey, which she wore on surveillance video taken at a Family Dollar store about 15 minutes away.

Burned remnants of what appears to be the Georgia Bulldogs jersey Debbie Collier was wearing when she was last seen on Sept. 10, 2022. (Kat Ramirez/MEGA for Fox News Digital)

Investigators quickly deemed the manner of her death a homicide but have not yet revealed what caused it. They said last week that they had no reason to believe it was a kidnapping or suicide.

The Habersham County Sheriff's Office said Collier's death happened between when she left the Family Dollar store at 3:09 p.m. on Sept. 10 and 12:45 p.m. the next day.

However, after more than two weeks, they have not publicly named a suspect or person of interest. 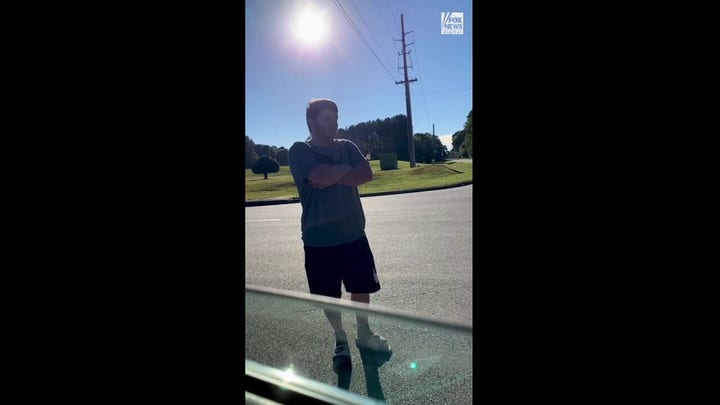 Also on Tuesday, Andrew Giegerich, the live-in boyfriend of Collier’s daughter Bearden, told Fox News Digital that the couple had no involvement in the slaying and was living in fear, sleeping behind barricaded doors.

"We sleep with stuff in front of our front door and our back door because we didn't have anything to do with this," he said. "We're a little scared ourselves."

Investigators quickly deemed the manner of Debbie Collier's death a homicide, but have not yet revealed what caused it. (Debbie Steve Collier/Facebook)

On Wednesday morning, the sheriff’s office announced it would be holding a public briefing on the investigation at 9 a.m. Friday.