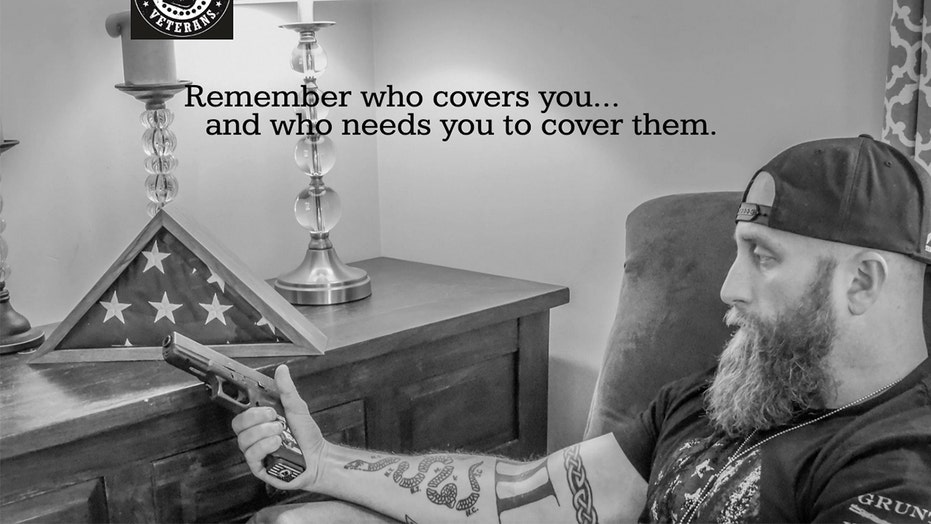 The Wisconsin-based psychologist has worked with military men and women for more than a decade and has seen the heartbreak that comes with the split-second decision to end a life.

“We are losing more vets to suicide than combat,” Sigmund, founder of the non-profit organization Cover Me Veterans, told Fox News.

Sigmund says while taking away firearms is one way to minimize the risk for someone experiencing chronic suicidal thoughts, it isn't always realistic. Many veterans she has worked with have a hard time giving up their guns because they see it as a part of their identity.

So instead, Sigmund started asking her patients to rubberband a picture of something that is important to them - their families, pets or even "battle buddies" - to their gun to serve as an instant reminder of the good things in life.

"Suicide attempts are incredibly impulsive," she said. "This is the last emotional safety - to get them to think twice."

Despite previous efforts and current recognition of the problem, there are still more than 20 veterans who take their own lives per day - twice the number of suicides of people who have not served in the military.

SETH LEDERMAN: OUR VETS FOUGHT TO PROTECT OUR FREEDOM. WE MUST FIGHT FOR THEIR FREEDOME FROM PTSD AND SUICIDE

"A lot of times people who are suicidal don't want to die," Sigmund said. "They want to escape the pain."

She says though it's sometimes difficult to embrace a suicide prevention effort using guns, it's worked for her patients.

Sigmund wanted to widen the cause and started the non-profit company Cover Me Veterans in her basement in December 2015. She still operates on an all-volunteer staff - up to 15 people now - and has teamed up with GunSkins, a company that provides do-it-yourself vinyl adhesive wraps that can be applied to pistol gun grips to make personalized skins for a firearm.

Cover Me Veterans offers any veteran a GunSkins kit free of charge.

The kits come with pre-cut pieces for the left and right sides of guns as well as three magazine skins for the bottom of the pistol. There's also an additional piece for the barrel of the gun. The pieces allow the user to trim along the edge of the firearm for a specialized fit. Some of the adhesives also have the number to the veterans crisis hotline on the side.

So far the kits have been well received.

MASSACHUSETTS VETERAN, 72, EMBARKS ON CROSS-COUNTRY WALK TO SUPPORT OTHER VETS

"This is a brilliant way to help vets who are suffering with PTSD and thinking of ending their lives," Louis Greenfield wrote on Facebook.

A third added: "I think it's awesome that you have come up with a unique way to help. So many brothers and sisters need a reminder at the right time."

Though the kits are free to veterans, they cost the nonprofit between $11 and $25 to make, depending on the personalization preference. And lately, Cover Me Veterans has been a little too successful for its own good, Sigmund says.

In the past two weeks, the company has received more than 5,000 orders after a video a veteran posted went viral. To put it in perspective, between 2015 and April 2019, Cover Me Veterans had a total of 2,500 orders.

"It's a great problem to have but we've exhausted our funding," Sigmund told Fox, adding that the company is looking for ways to fundraise so they can keep offering the kits at no cost to vets.

As of now, there is a backlog that delays veterans from getting their kits right away. And though Cover Me Veterans is working around the clock to fulfill orders, they, like the vets they serve, could use a little help.