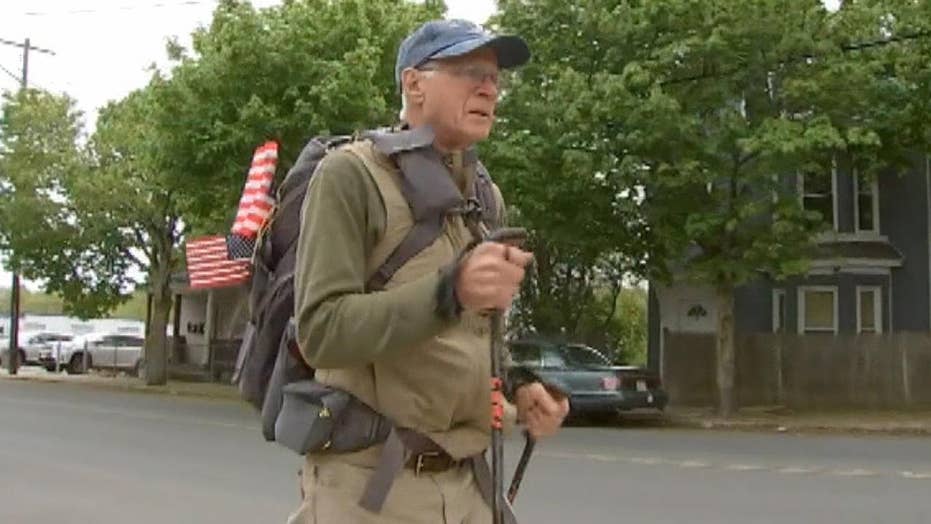 William Shuttleworth, who served in the Air Force from 1970 to 1976, takes his first steps in a 3,000 mile cross-country trek he as dubbed 'Vets Don't Forget Vets' to raise awareness for veterans' needs.

A 72-year-old U.S. Air Force veteran is on a one-man mission to make sure ordinary Americans don’t forget about the needs that returning combat veterans require.

William Shuttleworth, of Newburyport, Mass., embarked on a six-month walking trek across the country with just one message: “Vets Don’t Forget Vets.” He left Wednesday from Haverhill, Mass. and will end more than 3,000 miles away in California.

“I will average about 25-30 [miles] per day, which is like walking a marathon a day,” he told Boston 25. “I will probably average 500 miles a pair of shoes so I’ll probably go through six or seven pairs.”

Rodney Smith Jr. is showing his gratitude and inspiring kids to do the same, one lawn at a time.

WORLD WAR II VET, 91, GETS HIGH SCHOOL DIPLOMA 8 DECADES AFTER DROPPING OUT TO SUPPORT HIS FAMILY

Shuttleworth said he plans on stopping and visiting other veterans across the country to learn about their stories and journeys.

“I’m particularly concerned about the number of homeless, veterans that have mental health issues and the number of veterans that every day struggle with opioid and alcohol issues,” he said. “I consider it a privilege and an honor, lucky enough to be healthy to do this.”

The 72-year-old man plans to camp out throughout his journey. He plans to arrive at Vandenberg Air Force Base in Lompoc, Calif. by Halloween.