"We want to make sure every bodega owner in New York City that is law-abiding, that feels the necessity to carry a licensed gun, to go and apply for it. Why? Because you need to be able to defend yourself," Fernando Mateo, co-founder of United Bodegas of America, said at a press conference outside the Manhattan District Attorney’s Office.

NYC DA'S MURDER CHARGE AGAINST CLERK WHO WAS ATTACKED IS ‘INEXPLICABLE,’ EXPERTS SAY

He added that the group would patiently wait for Bragg to complete his investigation and "exonerate" Alba.

But a DA spokesman disagreed with Mateo's characterization of Bragg's comments.

United Bodegas of America co-founder Fernando Mateo at a press conference Tuesday outside the Manhattan District Attorney's Office. The woman on the left in pink sweater is Debbie Almontaser, a representative of the Yemeni American Merchants Association. (Screenshot of press conference)

While the DA acknowledged in the meeting that residents now have a constitutional right to apply for a license after the U.S. Supreme Court struck down a New York State law restricting who could obtain permits - he did not endorse this approach, spokesman Doug Cohen said in a statement.

The case against Alba has sparked national outrage – especially among bodega workers. The altercation began when Simon’s girlfriend tried to buy a bag of chips for her 10-year-old daughter using her electronic benefits card, but the transaction was declined, according to a criminal complaint against Alba. 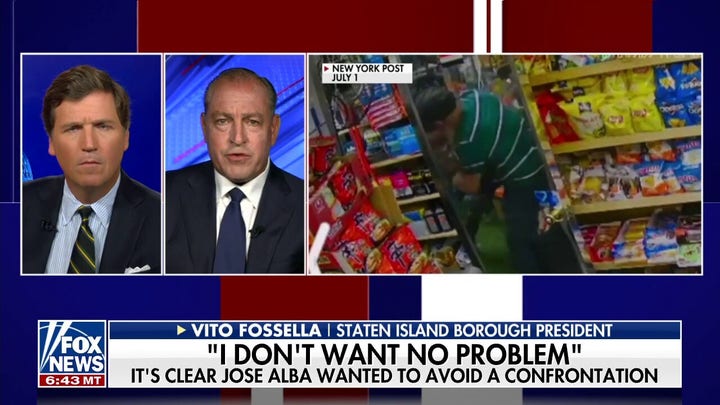 "My n— is going to come down here right now and f—k you up!" the irate mom threatened Alba, according to surveillance footage obtained by the New York Post.

Minutes later, she returned with Simon who stormed into Alba’s cubicle and violently shoved the older, smaller man into a chair. As the two tussled, Alba grabbed a kitchen knife and killed him, the complaint says.

Simon has 27 prior arrests and was on parole for assault at the time of the deadly confrontation, police sources told Fox New Digital.

A photo combination of Austin Simon's mugshot and the interior of the Bluemoon convenience store where he was stabbed to death after attacking clerk Jose Alba July 1. (Google)

Alba spent nearly a week locked up in Rikers Island on $500,000 cash bail.  He was released last week after a judge lowered his bail to a $50,000 bond, which his family posted.

Not all the bodega trade groups supported workers arming themselves. Almontaser said the Yemeni American Merchants Association did not endorse workers carrying firearms and urged them to have faith in the police and to call 911.

"When there’s a gun to your head, it’s very difficult to call 911 but if you survive that then call 911," added Mateo. "If you are being assaulted or beaten up, there’s really no time to call 911, but after that happens, call 911."

Several convenience store clerks near Bragg’s childhood home on W. 139th St. in Harlem blasted the prosecutor for his decision to charge Alba.

"[Jose Alba] did the right thing. His life was in danger even if the DA don’t believe that," said Ramón Betances, who called Bragg out of touch with the public. "Once someone goes behind the counter you are in danger."