Austin Williams, whose mother Connie Ridgeway was murdered in 2015 during a home invasion, speaks out.

The "extremely dangerous" Alabama prisoner and the corrections officer who helped him escape and then fled with him spoke regularly over the phone during the past two years while the convict was being housed in a different facility, the local sheriff announced Thursday.

Casey Cole White, 38, and Vicky White, 56 – who are not related, but are said to be in a "special relationship," – "were in contact via phone" between 2020 and 2022, while the inmate was in the custody of William E. Donaldson Correctional Facility in Bessemer, Alabama, Lauderdale County Sheriff Rick Singleton said in an emailed press statement Thursday.

Cole White was being housed in the Lauderdale County Detention Center – roughly 110 miles from Donaldson –  on Friday morning when he and Vicky White left together in her marked law enforcement vehicle. Vicky White was the assistant director of corrections for the detention center at the time.

The pair are suspected of then swapping out that ride for a 2007 copper Ford Edge SUV, with damage to the rear bumper, on Friday and then vanishing – kicking off a U.S. Marshals-led manhunt. Authorities say they might also be armed with a shotgun and an AR-15, and Vicky White likely had access to her service weapon.

Cole White was transferred from the Donaldson center to the Lauderdale facility in 2020, after confessing to the 2015 slaying of Connie Ridgeway, 58. The pair met there and maintained contact after he returned to Donaldson between 2020 and 2022.

According to the sheriff, Cole White had previously plotted an escape attempt from the county jail in late 2020.

His alleged plan was to take a hostage and break out of the facility on the day of his arraignment, before he was scheduled to transfer back to state prison. Officers caught him in possession of a "shank," or prison knife, and safely transferred him back to prison, authorities have said.

He again returned to the county jail in February of this year to await trial.

Vicky White had sold her home about a month prior to the April 29 escape, according to Singleton, and had talked about relocating to the beach for months.

On Friday morning, she allegedly told colleagues she was going to take the prisoner to the county courthouse for an evaluation and planned to stop at a doctor’s office afterward, saying she didn’t feel well. But there was no scheduled evaluation, according to the sheriff. 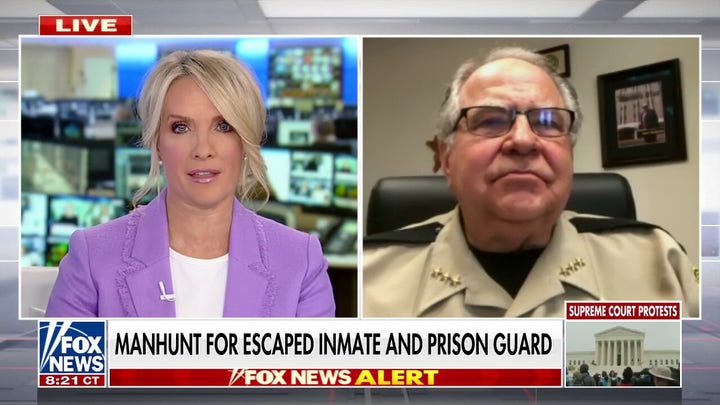 Authorities thought Vicky White went to work that day to serve her last shift before retiring, Singleton said. But she hadn’t yet cleared the bureaucratic hurdles.

"I think from the sale of the house, she possibly had access to some cash," he said. "The retirement papers were never sent into the state retirement system. She had to have a conference with the personnel director before that could happen."

Casey White was serving an unrelated, 75-year prison sentence when he allegedly confessed to killing Ridgeway. He subsequently pleaded not guilty by reason of insanity. Singleton issued a warning Monday that the escaped prisoner should be considered "extremely dangerous" and that any law enforcement officers who come across him should not take "any chances."

Court records show he also pleaded guilty to a 2010 domestic assault for attacking a male relative with an ax handle and received a sentence of six years in state prison.

Cole White stands at 6 feet, 9 inches tall and weighs somewhere between 260 and 330 pounds, according to authorities and prison records.

Vicky White is described as 5 feet, 5 inches tall and weighing around 145 pounds. She has blonde hair and brown eyes.

The U.S. Marshal Service is offering a reward of up to $10,000 for information that leads them to the fugitives. Anyone with information on their whereabouts is asked to call the U.S. Marshals at 1-800-336-0102.