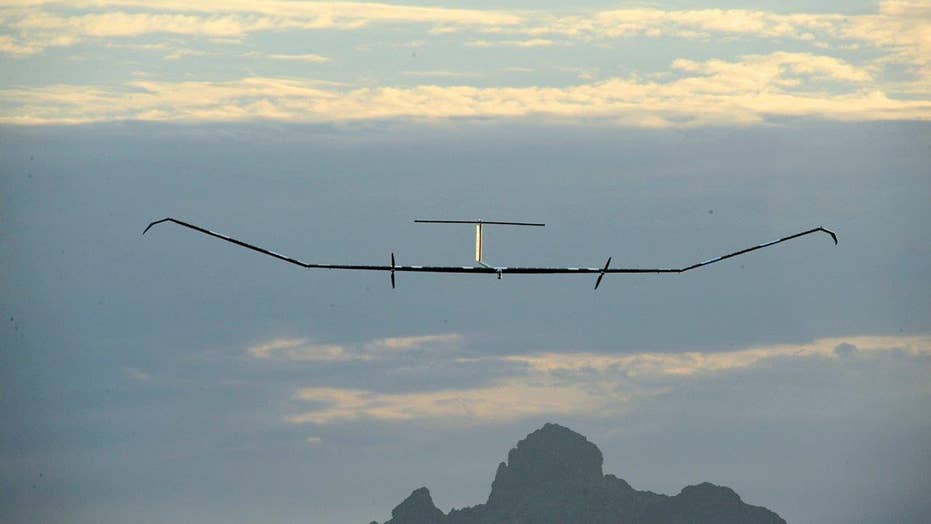 'Star Trek'-style surveillance drone for the US military

Tech Take: Allison Barrie on the new military drone that is powered by the sun and can conduct missions without landing for 45 days

It looks like a Star Trek Bird of Prey, and acts like a drone that terrorists cannot escape: A new military aircraft that’s powered by the sun and can conduct missions without landing for 45 days.

Airbus Defence and Space calls the new drone the High Altitude Pseudo Satellite (HAPS), but it’s been dubbed the Zephyr. What’s a “pseudo satellite”? It has satellite-type capabilities like extreme surveillance— but is on demand with the flexibility and versatility of an unmanned aircraft.

Unlike a satellite, the Zephyr can be landed, modified with alternative tech, and quickly re-launched to provide different capabilities as required.

The Zephyr could fly without landing to provide the military with non-stop high- resolution imagery for a remarkable month and a half, and it could give teams accuracy down to 6-inch resolution.

Flying at about 12.5 miles high at a fixed location, Zephyr can see over 250 miles to the horizon and provide imagery in excess of 386 square miles.

In addition to providing high bandwidth communications, the drone could gather data over these vast areas and equip forces with persistent, real-time, enhanced level of detail actionable data. This sort of capability could prove particularly handy for special operations teams.

Star Trek, a show where starships are regularly featured, just had its 50th anniversary. Folks have been describing the look of this futuristic drone as similar to the Klingon Bird of Prey.

While the Zephyr won’t be flying in space, it can get awfully close. The drone can reach heights higher than 70,000 feet. At those heights you can see the curvature of the earth.

How high is that? For starters, if you’ve taken a commercial aircraft, then you’ve flown half as high as this drone.

The legendary aircraft, the U2 or Dragon Lady, regularly flies those extreme heights, skimming space and sky.

At these heights, the new drone can very easily evade tough weather conditions, jet stream winds, and air traffic while also reducing risk of detection and maximizing the ability to surveil great swathes of enemy activity on the ground.

The Zephyr S has a 74-foot wingspan, yet is lightweight. Light enough to be launched “by hand.”

This aircraft harnesses solar power to fly during the day. Using sunlight, it also recharges its lithium ion batteries. The batteries then power night flying. Since the Zephyr does not rely on fuel, it is not limited by how much fuel it can carry, like other UAVs.

Five warfighters working together can launch the lightweight drone from flat ground. After it has been launched, the same team on the ground can operate it. Warfighters can currently use the Zephyr’s control station to fly it over a range of up to 250 miles. But it can also be remotely operated by a team located anywhere in the world.

The drone is equipped with an antenna that allows it to communicate, and satellites can help relay commands to the Zephyr from operators at anywhere on the ground.

The Zephyr is designed to be autonomous so it can also fly itself without an operator directing its every move. With its remarkable endurance, it could be launched from Yuma in the United States and then collected weeks later in Afghanistan at the completion of its mission after several weeks.

Warfighters can deploy the Zephyr to provide persistent eyes in the sky to track enemy movements. The drone’s camera could provide real-time video and reveal adversary activities and movements.

In addition to surveillance, Zephyrs could be used for things like missile detection, navigation and C4ISTAR [Command Control Communications Computers Intelligence Surveillance and Reconnaissance] relay.

There are two military variants underway: Zephyr S and T (twin). The larger size of the Zephyr T vehicle enables it to accommodate payloads heavier payloads with higher power demands.

The Zephyr solar-powered drone family was originally built by Qinetiq and is now in further development with Airbus Defence and Space.

Testing and development will continue.  The Zephyr has already flown safely for over 900 hours. The company states it holds three world records including the endurance record of 14 days. In recent tests, it has even operated at 70,740 ft, circling the Yuma desert.