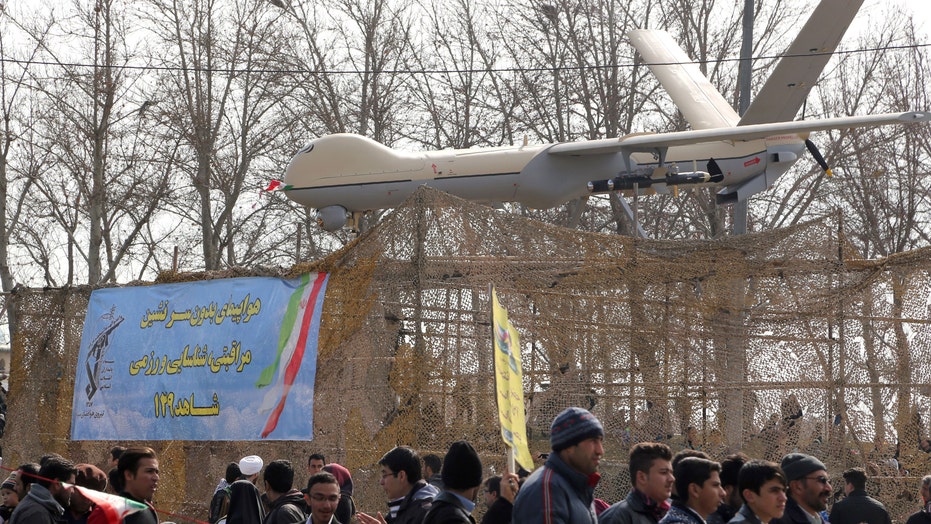 The recent flare-up between the U.S. and Iran has thrust Tehran’s military capabilities into the spotlight. While tensions appear to be de-escalating in the region, experts have been weighing the potential threat posed by Iran’s drone firepower.

Seth J. Frantzman, executive director of the Middle East Center for Reporting and Analysis, told Fox News that Iran has been using drones for decades. “Iran began its drone program during the Iran-Iraq war with UAVs [Unmanned Aerial Vehicles] such as the Mohajer and Ababil series,” he explained via email. “Iran is very proud of its success in creating an indigenous drone industry and pioneering its own UAVs.”

Iran has a sophisticated line of drone technology, which continues to expand, Frantzman, the author of “After ISIS: America, Iran and the struggle for the Middle East,” added.

Iran’s PressTV, for example, has touted the country’s progress in drone development and its technology has already been deployed outside the country’s borders.

Iranians walk past Iran's Shahed 129 drone during celebrations in Tehran to mark the 37th anniversary of the Islamic revolution on Feb. 11, 2016. (ATTA KENARE/AFP via Getty Images)

It is not clear how many drones Iran has at its disposal, although the country has been ramping up its drone activity in recent years.

In 2014, for example, footage emerged of an Iranian-made “Shahed-129” drone flying over the Syrian capital of Damascus. That UAV, described as a similar size and shape to a Predator drone, is said to have an operating range of up to 2,000 km (1,243 miles), according to David Cenciotti, who writes The Aviationist blog.

“Last year [Iran] began using a new drone unit within the Islamic Revolutionary Guard Corps,” Frantzman told Fox News. “It has exported drone technology to Hezbollah in Lebanon and the Houthi rebels in Yemen. Iranian drones have been used by the Houthis frequently against Saudi Arabia's armed forces and against airports and infrastructure.”

HOW MIGHT THE US ATTACK IRAN? TOMAHAWK MISSILES, B-2 STEALTH BOMBERS, F-35S, CARRIERS?

The expert cited last year’s attack on an oil facility in Abqaiq, Saudi Arabia, as evidence of Iran’s drone firepower. “The Abqaiq attack in September 2019 was evidence of just how sophisticated the drone program has become, using a drone swarm to attack oil facilities with precision,” he said. “I've argued Iran is a ‘drone superpower’ considering its' expansion of its UAV arm in recent years.”

Yemen’s Iran-backed Houthi rebels claimed responsibility for the attack, although the U.S. accused Iran of launching it. Tehran has denied the allegations.

The U.S. government has already highlighted Iran’s drone capabilities. In a Worldwide Threat Assessment released by the Office of the Director of National Intelligence in January 2019, officials cited Iran’s use of drones against ISIS in Syria. “Iran’s retaliatory missile and UAV strikes on ISIS targets in Syria following the attack on an Iranian military parade in Ahvaz in September [2018] were most likely intended to send a message to potential adversaries, showing Tehran’s resolve to retaliate when attacked and demonstrating Iran’s improving military capabilities and ability to project force,” the report said.

DISINFORMATION: HOW IRAN COULD TAKE A PAGE FROM RUSSIA’S PROPAGANDA PLAYBOOK

Iran, the report added, has provided support for Houthi attacks against shipping near the Bab el Mandeb Strait (between Yemen and the Horn of Africa) and land-based targets deep inside Saudi Arabia and the UAE, using ballistic missiles and drones.

Additionally, the Islamic Revolutionary Guard Corps Navy has challenged American ships in the Persian Gulf and flown UAVs close to U.S. aircraft carriers, according to the report.

Frantzman noted that the Iranian military has also used drones against Kurdish dissidents, as well as in combined operations in the Persian Gulf and the Gulf of Oman. Tehran also sent an armed drones into Israeli airspace in February 2018 and a “killer drone” team was deployed in an attempt to strike at Israel in August 2019, Frantzman explained. The drone that entered Israeli airspace in February 2018 was shot down and the 2019 Iranian drone strike was thwarted by an Israeli attack on targets inside Syria.

He also noted that some of Iran’s claims about its drone technology have not yet been verified. “Not all of Iran's boasts about its UAV capabilities are confirmed,” he told Fox News. “For instance, Iran unveiled a long-range drone that can fly 1,000 km [621 miles] supposedly in September 2019. But until these are tested on combat it's not clear they work.”

Frantzman explained that “drones don’t win wars,” but warned that they can harass ships or airports and can be used against air defense radar or sensitive facilities, such as oil storage. “In that sense, drones are partly an annoyance and a way to potentially strategically cripple a country if used in large numbers,” he said. “Countries are just learning how to use them in offensive attacks, rather than just surveillance.”

“Potentially if Iran used drones to attack Gulf states or drone swarms against Israel, it would be a threat, but it's a threat that air defense systems like Patriot and Israel's Iron Dome can deal with,” he added. “It just means the U.S. and other countries need to invest more in new technologies, such as jamming and lasers and radar to spot the drones.”