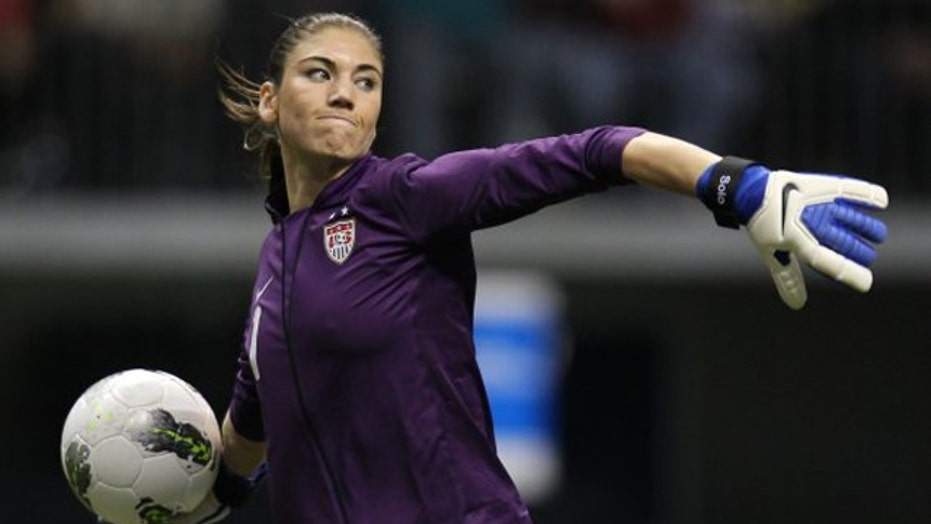 Should she be booted from soccer?

Hope Solo, the star goalie for the U.S. women’s soccer team, has domestic violence hanging over her head as she preps for the World Cup – while several NFL players have been ousted for similar charges – but experts say there's not enough evidence to call it a double standard.

Solo is charged with two misdemeanor counts of fourth-degree domestic violence assault in Washington state stemming from a June 21 incident with her half-sister and 17-year-old nephew at a family gathering. She has pleaded not guilty and the case is scheduled for trial Nov. 4. She faces up to six months in jail if convicted. For now, the team and major sponsor Nike are standing by her.

Solo’s case has drawn attention following Baltimore Ravens running back Ray Rice’s indefinite suspension from the National Football League over the assault of his wife, which was captured on security footage.

While both athletes are embroiled in domestic violence cases, Solo’s case is different – at least for now.

“In the Ray Rice case, we’re talking about a smoking gun video that clearly shows someone who committed a crime,” Brian Pinero, director of digital services for the National Domestic Violence Hotline, told FoxNews.com. “With respect to Hope Solo, all we have right now is a police report. She has not gone through the judicial process yet.”

A Nike spokesman released a statement Tuesday saying the giant sports brand is standing by Solo at this point in time.

"We are aware of the allegations and that Hope Solo has pled ‘not guilty’ to the charges,” Nike said in a statement obtained by FoxNews.com. “Hope remains a Nike athlete and we will continue to monitor the situation."

Scott Blackmun, CEO of the U.S. Olympic Committee, told USA TODAY Sports in an email that, “abuse in all forms in unacceptable.”

"The allegations involving Ms. Solo are disturbing and are inconsistent with our expectations of Olympians,” he wrote. “We have had discussions with U.S. Soccer and fully expect them to take action if it is determined that the allegations are true."

“I don’t think there’s anything wrong with that,” Pinero said of the decision by Solo’s employer to keep her playing. “We don’t know enough yet and it has not played out legally yet.”

Solo was arrested June 21 and charged with two misdemeanor counts of fourth-degree domestic assault – one against her older half-sister and the other against her teenage nephew. She pleaded not guilty in Municipal Court in Kirkland, Wash., on Aug. 11 to gross-misdemeanor charges related to the incident, which could land her up to six months in jail.

According to court documents, Solo’s nephew alleges the two had a verbal altercation at his home that resulted in Solo punching him in the face and tackling him. When the teen’s mother tried to intervene, Solo attacked her also, according to witness accounts. Court documents allege that Solo’s nephew then broke a wooden broom over her head while trying to yank her off his mother.

Solo’s attorney, Todd Maybrown, told the Associated Press that the star athlete was innocent and, in fact, a victim of the incident in question.

“Hope is not guilty of any crime,” Maybrown said. “In fact, our investigation reveals that Hope was assaulted and injured during this unfortunate incident.”

In a statement posted to her Facebook page late Tuesday, Solo said in part, “While I understand that the public desires more information regarding the allegations against me, I continue to maintain my innocence against these charges. And, once all the facts come to light and the legal process is concluded, I am confident that I will be fully exonerated.”

In Rice’s case, a security video leaked by the celebrity news website TMZ shows Rice punching his then-fiancée Janay Rice unconscious inside an elevator at an Atlantic City casino on Feb. 15. Both Rice and his fiancée were arrested and charged with assault, and Rice was indicted by a grand jury in March on third-degree aggravated assault – facing a possible jail sentence and fine. The couple has since married.

It was after the security video was released Sept. 8, however, that Rice’s contract with the Ravens was terminated. He also was subsequently suspended indefinitely from NFL Commissioner Roger Goodell.

While Pinero and other anti-domestic violence advocates say it’s too early to cry “double standard,” Kim Gandy, president of the National Network to End Domestic Violence, said Solo should be put on the sidelines until the court proceedings are concluded.

“My personal opinion is that athletes are role models and probably should not be on the field when they have criminal charges pending, whether they are women or men,” she told FoxNews.com.

“I think when someone is arrested for a violent act of any kind that they should be on the sidelines for a while until it gets sorted out,” Gandy said.

“I don’t know if she’s being treated any differently from most of the men against whom accusations have long been made,” Gandy added, referring to a database compiled by USA Today that showed domestic violence accounts for 85 of the 713 arrests of NFL players since 2000.

“The evidence around Ray Rice – the smoking gun video – has just created a national dialogue about the fact that these kinds of incidents have rarely been punished in professional sports,” she said.